page: 1
56
<<   2  3  4 >>
log in
join
share:
Shamrock6
+42 more
posted on Aug, 6 2019 @ 11:42 AM
link
Time and time again 2A supporters are told “nobody is coming for your guns.” Time and again 2A supporters are left baffled at how anybody can say that line with a straight face. Gun control advocacy groups, Hollywood, and any number of the political elite are entirely happy to cry “ban all the gunz!” as they sit in their walled compounds with armed security manning the gate.

Luckily, though, the oh-so-unbiased Vox has finally put it in writing. They’ve finally made it easy for 2A supporters to reply to the above claim easily and quickly, with a source, that shows definitively that “they” are most definitely trying to come for our guns. Does Vox make policy? No, of course not. And they certainly don’t enforce policy. What they can do, though, is excoriate the moderate left for not being extreme gun-grabbers who want anything more complex than a wheel gun banned and, if need be, confiscated by force. Somehow, Vox manages to acknowledge that existing gun control laws are rife with poor enforcement and application yet still claim those laws are nowhere near strong enough.

How about defending your freedom?

There’s no good reason for you to think what I own is any of your business.

I can think of about 25 good reasons

most of all your opinion shouldn't limit my freedom 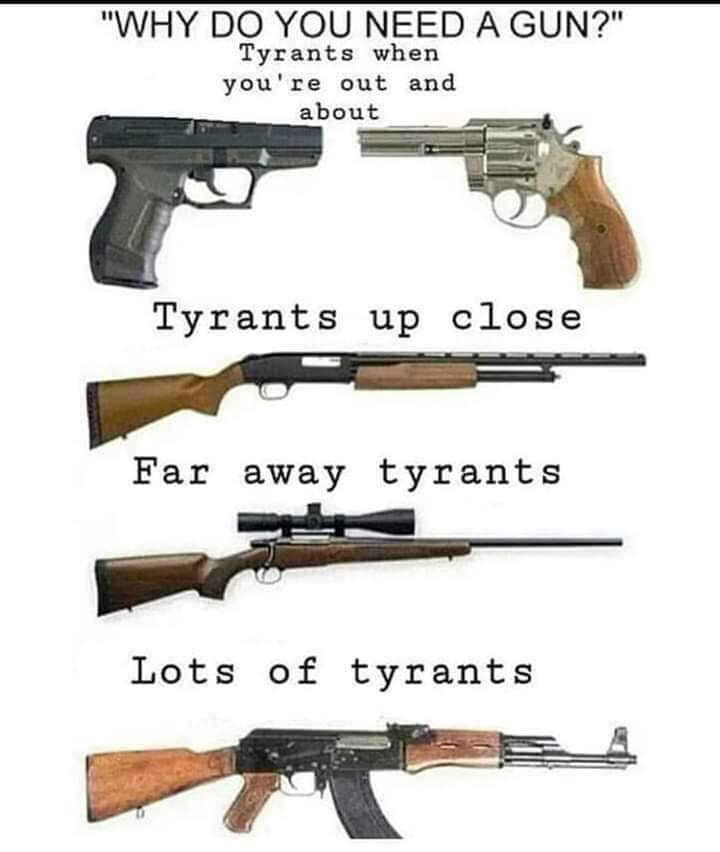 Doesn't matter, if you ban it for the law-abiding citizens the only people with guns that hold more than 25 rounds will be the criminals.

Does that mean there aren't some in Congress who want gun control or a gun ban? No, of course not. But even when they had control of Congress, nobody came for my guns or even tried to come for my guns.

It's nothing more than conservative dogma at this point, and the NRA loves it! Boosts membership to have that fear mongering out there constantly. hell, even proposed common sense changes to the background check process get labeled as "THEY'RE COMING FOR OUR GUNS!"

There is no good reason for a lot of things...

Thank you for acknowledging that there are those who want a gun ban.

That was the entire point of the thread.
edit on 6-8-2019 by Shamrock6 because: (no reason given)

Exactly. When he said, quite a while ago, that he favors “Take the guns now and worry about due process later” and I pointed that out as being a tiny bit anti-2A, I was roundly shouted down and told it meant nothing.

originally posted by: NoClue
a reply to: PraetorianAZ

A group of 4-10 men enter your house or property and want to kill you. that gives you 2.5 perfect shots to stop each of the 10 people.

Putting limits is stupid and your reasons are always flawed and you cry and whine endlessly and it sick, sad and tiring.

Maybe someday I'll even buy the shotgun to go with them!

there is absolutely no reason to tell me what I can and cannot own, and yet I feel like every day new limits are placed on my freedoms.

If you watched the dems 1st debate almost all of them said they want to remove guns.
Some of them by force if needed.

It is no secret at this point.
It is their agenda.


If you watched the dems 1st debate almost all of them said they want to remove guns.
Some of them by force if needed.

And then those wanna be tyrants turn around and tell us there's no reason to be afraid and we will not need guns anymore. SILLY ... BE AFRAID ... BE VERY AFRAID!

*calmly walks into the thread*


*calmly walks out of the thread*