posted on Aug, 8 2019 @ 02:33 PM
link
Just read a story About a Trump supporter attacking a child because he would not take his hat off during the national anthem. HE said he was acting out orders from Trump.

I don’t quite understand why so many people refuse to acknowledge this but they do. It’s to blatant and obvious not to see.

They are a bunch of hypocrites. These are the same "liberals/democrats" whom still adore and see as an idol eugenicist/white supremacist Margaret Sanger. In her April 1933 newslater of Birth Control Review she even published one of the papers of Ernst Rudin, the nazi doctor whom masterminded the holocaust. 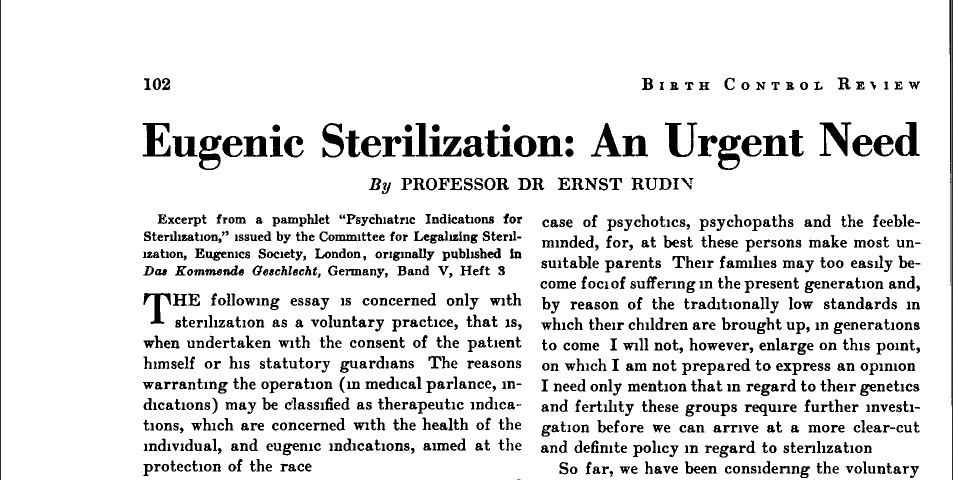 She even stated that birth control for her was the way to "better the race" as in THE WHITE RACE, yet Liberals/democrats to this day love her.

But hey, these are the same people whom also love Bill Gates and Melinda Gates despite the fact that it has been proven that they have been part of programs in which they forcefully sterilize untold numbers of people and force abortions on untold numbers of women in third world countries.

Democrats/liberals are the party of hate, crime and murder. They love it, but they try to mirror their own atrocities on others just like they do with Trump supporters and POTUS Trump.

FWIW... pretty sure you know what a Logical Fallacy is... so, if you can, resist the "Yeah, but it's Breitbart" logical fallacy.

It doesn't matter if it's "Bozo the Clown's Weekly Reader" - it's the history of documented events that matters... not getting lost in pondering why this story has been completely ignored by the majority of media.

The El Paso shooter blames both the right and the left, but his beliefs are LEFT-WING. You forget that "white supremacy" was started by democrats, and to this day the majority of "national socialists' continue to be left-wing and believe in the old beliefs of "white supremacy" that democrats started over 200 years ago.

In his "economic reasons" the El Paso shooter states he wants "a basic universal income," he also calls for the need for "universal healthcare" and calls "American lifestyle is destroying the environment in our country" and you want to claim he is right-wing?

As for his attacks on democrat's open borders he also stated the GOP is at fault also for being pro-corporation which to him equals to pro-immigration...

So Universal Income and Universal Healthcare for everyone are not "Right Wing" want list items?

I'm shocked! Shocked I tells ya!

The El Paso shooter... aside from being a raging bigot... must have been a Bernie Bro in 2015/16... most of his policy ideas seem to have been torn right from the Sanders platform
edit on Fri Aug 9 2019 by DontTreadOnMe because: trimmed quote Trim Those Quotes

originally posted by: Theyy
Just read a story About a Trump supporter attacking a child because he would not take his hat off during the national anthem. HE said he was acting out orders from Trump.

I don't like Trump..but that guy was a literal nutcase. All of the fingerpointing..by both sides is getting tiring, and is not remotely productive.

Individuals are responsible for themselves.

Can we talk about this please? It seems leftist political propaganda is causing loss of life


Now we have some Leftie nutjob on CNN saying that Trump Supporters need to be eradicated, literally making it sound like it's the lefts duty to start killing off a large portion of the population.

I'm shuddering at the possible result of that little gem.

posted on Aug, 9 2019 @ 05:16 PM
link
The guy in El Paso wasn't "right wing" he wanted UBI and universal healthcare, he's a WAYYY back Democrat, you know, the ones that ran the KKK and such.

You can still be a fascist and subscribe to a few socialist policies, no? And he obviously didn't show up to have a direct democratic sit-in like your usual occupy leftwingers, so fcking what?

The mental gymnastic involved in framing him a democrat are very telling. You guys go all the way into his manifesto, but yet are somehow unable to connect the dots to Trumps whole invasion from Oz propaganda.

That's a big red flag right there, keep up the deflections!

posted on Aug, 9 2019 @ 05:32 PM
link
Does it matter that the manifesto wasn't posted by the shooter or even signed by him?
Until the authenticity is proven this is an exercise in projection.

posted on Aug, 9 2019 @ 05:45 PM
link
Seems there are various reasons that people melt-down to the point of randomly, or semi-randomly taking the lives of others.
But it also seems that the horrible event in El Paso was driven by hatred of immigrants.

Driven by hatred of immigrants.

I personally think mass shootings in general have some commonalities. Buried rage, finding an outlet in the worst possible way.

But the root of this one looks pretty cut and dried.
Hatred of immigrants

I hope people can discuss it without deflection.

I think its time for people like you to stop pretending your are calling for open discussion when in reality you are calling for condemnation of opposing political ideology.

He even said so himself.

The man accused of killing 22 people at a shopping center in El Paso, Texas, last Saturday said he deliberately targeted "Mexicans" during the assault, according to police documents.

The records provided additional details regarding the arrest of the suspected shooter, 21-year-old Patrick Crusius.

According to an affidavit, Crusius emerged from his vehicle with his hands up after he was stopped at an intersection shortly after the attack, telling police, "I'm the shooter." He then told detectives he entered the Walmart store with an AK-47 assault rifle and several magazines, and that he was targeting "Mexicans."

Let's call a spade a spade.

Where is the benevolent part of white supremacy that's supposed to prevent violence? All I can see is an ideology for control freaks with a sense of moral superiority, and there will always be some radicalized idiot to pick up the hatchet. The violence is in the pudding, so to speak.