posted on Aug, 2 2019 @ 08:54 PM
link
I was in Morocco once, and they had these cool looking pots called "Tagines". Most of them where clay, and they made the best food in them.

I had to buy one, but the one I bought was from LeCreuset, so it had a cast iron bottom and a ceramic top. Wasn't cheap, but it cooks well.

The spices of this region's cooking are second to none! Cinnamon, Clove, Cumin, Allspice, Turmeric, Garlic, Cardamon, Chinese 5 Spice, Cayenne, ...some salt and black pepper...WOW...it's awesome!!

So, I did some chicken, with all the spices, and some prunes, dried apricots, and dried cranberries. It took a while to cook, but it came out fantastic!!

I shook the chicken up in the spices and browned it a bit, then dumped in the rest. I also cooked up some Naan bread, with some butter on it.

I actually made it from scratch, no recipe. I did get a recipe for the Ras Al Halout, but other than that it was all free-form.

It's a whole huge bunch of spices!!

How did you cook with it?

They're awesome for cooking things tender and juicy, it's down to the way they lock the moisture in. Authentic Moroccan food is great.

I hate to say it though, these days you can get those oven bags and achieve a similar effect. Not the same but they do work really well.

Yum! I have a chicken recipe using, onion, cinnamon, ginger, clove and also apricots and apricot preserve and dates. 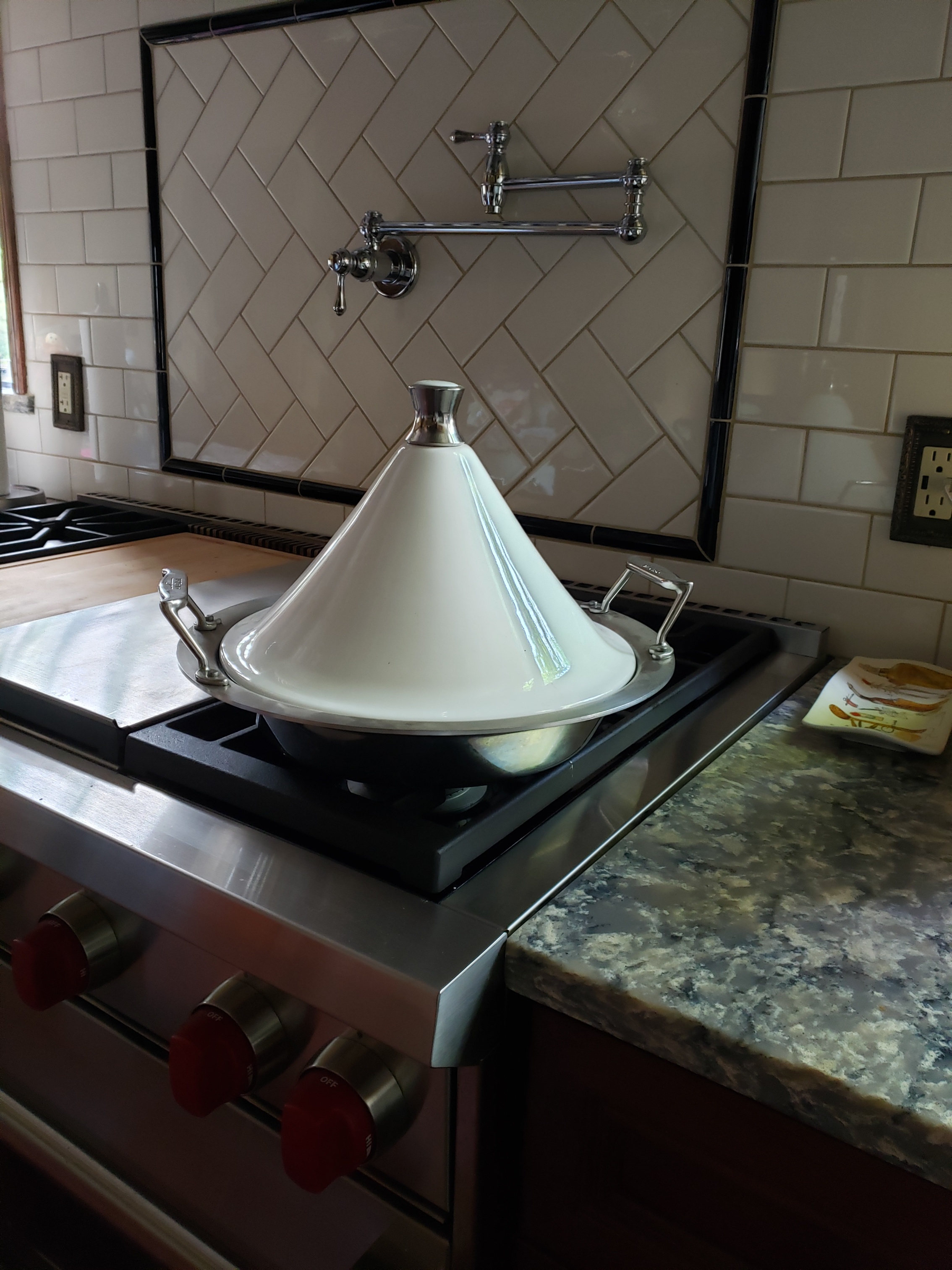 Is that a tap above your range top/oven. I'm envious of your kitchen!

Well, I started the chicken off by marinating the chicken in the dried spices, then put it in the tagine with some olive oil on the stove top, added the onion and fresh garlic, sweated that out a little bit and then added some chicken stock, egg plant, carrots, green beans, dumped in all the spices, added a squeeze of fresh lemon. Then I put the tagine in the oven at 325 for about 60 minutes until the carrots were sweet and tender. Then I added dried apricots, prunes and dried cranberries and cooked for another 25 minutes until the apricots and cranberries were fully hydrated and turned the oven off while I whipped up some pearled couscous. I had some nice Naan bread I'd made so I fired some of that up and served it on the side with some grated garlic and butter.

I need to build a new house, just to get the kitchen I want. Walk in pantry straight from the garage/car. etc

Made my 1st Classic French Beef Bourguignon....finger licking good. Plenty of bread to mop up juices. Sunday night slow dining @ home in from of the fire. Heaven.

Well, I'm really glad for you if you bought a Le Creuset DO for $40 bucks! That would be a first for me!!! At least for a new one! And, I've never seen one at K-mart.

Most of mine have been several hundred dollars each. They're worth it though!

Le Creuset cast iron ware pieces are masterpieces of cooking! Comparing anything else to one is a disservice.


Le Creuset cast iron ware pieces are masterpieces of cooking! Comparing anything else to one is a disservice.

Probably you're correct, but its like a $300 hand crafted knife, I'm no longer in the restaurant business, and overkill.

Oh, I wasn't trying to be sarcastic or anything, it was kind of tongue in cheek. Them being French and all.

Sorry if you thought I meant differently.

And I totally agree on the knife thing, within reason.