posted on Aug, 1 2019 @ 11:38 PM
link
Back in March of this year, I did a thread titled, "Mysterious Planetwide Rumble May Have Come From the Largest Underwater Eruption Ever Recorded." In that thread was discussed what had been mentioned in a thread from last year titled, "Strange seismic waves originating off French Madagascar," by RadioRobert.

In my previous thread scientists had used information from seismic stations in the region to theorize the size of the underwater eruption. The inferred volume from the paper quoted in my prior thread was from between .1 km3 to 2 km3. The paper from which I took this thread's title has some actual measurements of the erupted volume from the underwater volcano:

French scientists have witnessed the birth of a newborn underwater volcano. Rising from the Indian Ocean floor between Africa and Madagascar is a giant edifice 800 meters high and 5 kilometers across, according to initial results obtained by the research vessel Marion Dufresne and released last week. In previous maps there had been nothing. The quarter-million people living on the French island of Mayotte in the Comoros archipelago knew for months that something was happening. From the middle of last year they felt small earthquakes almost daily. Now, data retrieved from ocean-bottom seismometers reveal why. They show, east of the island, a tightly clustered region of earthquake activity, ranging from 20 to 50 kilometers deep in Earth's crust. The research team suspects a deep magma chamber fed molten rock to the surface and then contracted. The size of the volcano indicates that as much as 5 cubic kilometers of magma erupted onto the sea floor—the largest such event ever witnessed.

Unfortunately, the paper is paywalled so all we have access to is the abstracted, quoted above. The measurements taken indicate that the volume of erupted material could be as much as 5 cubic kilometers. To put that in perspective, I present the VEI chart from my previous thread: 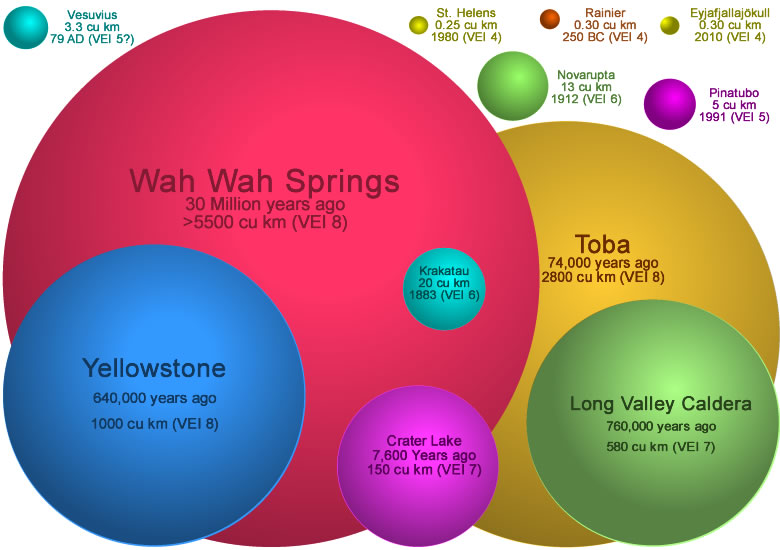 This underwater eruption is roughly equivalent to Mount Pinotubo's eruption in 1991. This page lists some of the effects from that particular eruption to give one an idea as to what sort of impact this event could have had had it occurred in the atmosphere rather than underwater.

Suffice to say, this eruption is a historic event that has gotten very little attention merely because of the fact that it took place beneath the surface of the sea.

One danger this particular eruption poses is that of a local tsunami. Most of us are familiar with the tsunami which took place following the Great Tōhoku quake in March of 2011 off the coast of Japan. That specific tsunami was due to the earthquake, and volcanoes can indeed produce tsunamis as a result of associated earthquakes, but this is far from the only mechanism which is present in volcanoes:

Volcanic tsunamis are generated by a variety of mechanisms, including volcano-tectonic earthquakes, slope instabilities, pyroclastic flows, underwater explosions, shock waves and caldera collapse. In this review, we focus on the lessons that can be learnt from past events and address the influence of parameters such as volume flux of mass flows, explosion energy or duration of caldera collapse on tsunami generation. The diversity of waves in terms of amplitude, period, form, dispersion, etc. poses difficulties for integration and harmonization of sources to be used for numerical models and probabilistic tsunami hazard maps. In many cases, monitoring and warning of volcanic tsunamis remain challenging (further technical and scientific developments being necessary) and must be coupled with policies of population preparedness.

As one reads through the above linked paper, available in its entirety, one sees that there are several other possible events which could come from a volcano and generate a tsunami as a result. Slope instabilities and caldera collapse being the most likely possibility we could see from the volcano off the coast of Mayotte:

Mount Mayuyama is a peripheral dome of Unzen volcano, which was active, but the 340×106 m3 failure was probably triggered by a strong earthquake [23]. The failure pore fluid pressurization may have contributed to the development of the collapse structure [24]. Tsunami run-ups ranged between 8 and 24 m on the opposite side of the Ariake Bay and 15 030 people were killed [25].
...
For instance, the bulk volume of the 1991 caldera collapse at Pinatubo, Philippines, might have subsided in 34 min [121]. Ulvrová et al. [15] demonstrated that caldera collapse of the Kolumbo submarine volcano, Aegean Sea, would produce significant wave heights (more than 1 m) on the shorelines of Santorini Island if the bulk subsidence lasted less than 10 min (figure 5).

With that, I come to the end of this OP. I will continue to look for other published material to add in subsequent posts to this thread. I know many of us are weary of the continual political threads which seem to dominate the site lately. It is my hope that this brief respite will be welcome by others and that ATS still has a strong interest in the movements of the earth; the Quake Watch and related threads were a huge part of the original draw for me and I very much am still interested in this genre of subject matter.
edit on 1-8-2019 by jadedANDcynical because: fixed link (maybe I should preview before I post, eh?)

posted on Aug, 2 2019 @ 01:37 AM
link
Thanks for posting, you just sent me on quite an informative adventure looking up various volcanoes and historical events. Pinatubo and Novarupta, etc.

I learn a lot of new things everyday!

posted on Aug, 2 2019 @ 07:22 AM
link
Very interesting indeed! After all, the ocean is really another part of our atmosphere. It's made up of fluid layers, exactly like the air we breathe and exist in every day... We think of the oceans as being a separate world, because they're dark and mysterious, and largely unexplored. But the algae accounts for a HUGE amount of the breathable oxygen in our atmosphere... I can't recall the percentage right now, but it's damn big. It's crazy to think such a large underwater event wouldn't be be equally impactful to our experience here on the earth's surface in the future.

Thank you for that! I always consider it a compliment when someone tells me that something I've posted or said to them makes them go look something up online!

That would be the Science Magazine link in the OP, though, as I mentioned, the full article is paywalled and only the abstract is available.

I did find this article @Live Science, which has some more details regarding this event, including a sonar image that I believe to be from the aforementioned Science Magazine article: 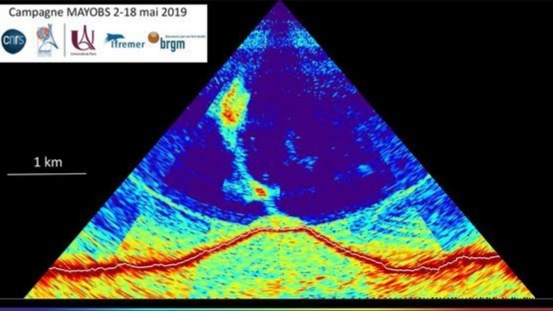 So how will they attempt to find out if this is an older volcanic structure?


Can you imagine diving this site? How cool would that be

posted on Aug, 2 2019 @ 11:06 PM
link
Some time ago in another thread far far away I posted there were at least (best guesstimate by those who study such things) one MILLION underwater hydro-thermal vents and volcanoes thought to exist under the oceans.. People throw numbers around all the time without actually thinking about the amount. IMO ONE MILLION is a big number so I am surprise there are not more detected major eruptions happening all the time..

The solar minimum guys are predicting more earth quakes and volcano eruptions coming over the next few years as the solar minimum increases. We will just have to wait and see if they are correct.

That is amazing. Thanks for the info as there is a lot to read about this.
One thing is that you can see the gaseous plume going up. It must be very evident on the sea surface, like turmoil and huge bubbles, but I could not find any talk about that.
edit on 3-8-2019 by charlyv because: spelling , where caught

From the abstract quoted in the OP:

In previous maps there had been nothing.

Now, I don't know when the region was previously mapped, the actual study may have that information, but, again, it is paywalled and as far as I know, none of us have access without paying for the article.

I don't imagine diving the site would be all that cool. An underwater eruption would have extremely high sea temperatures anywhere near the plume close enough to see anything I would imagine. Perhaps they sent down some ROVs to see what could be seen.

See, the cool thing about seismic activity is that anything of significant size propagates very specific signals that can be pregistered by instruments all over the world. Which is how this eruption was originally recorded. There was an intense enough signal in the low bands of all seismic stations around that world to cause scientists' ears to perk up and go looking. Through analyzing data and a series of calculations, it was determined that the event was very likely related to the earthquakes the residents of Mayotte were feeling back in October/November of 2018.

Here is a spectrogram of the event: 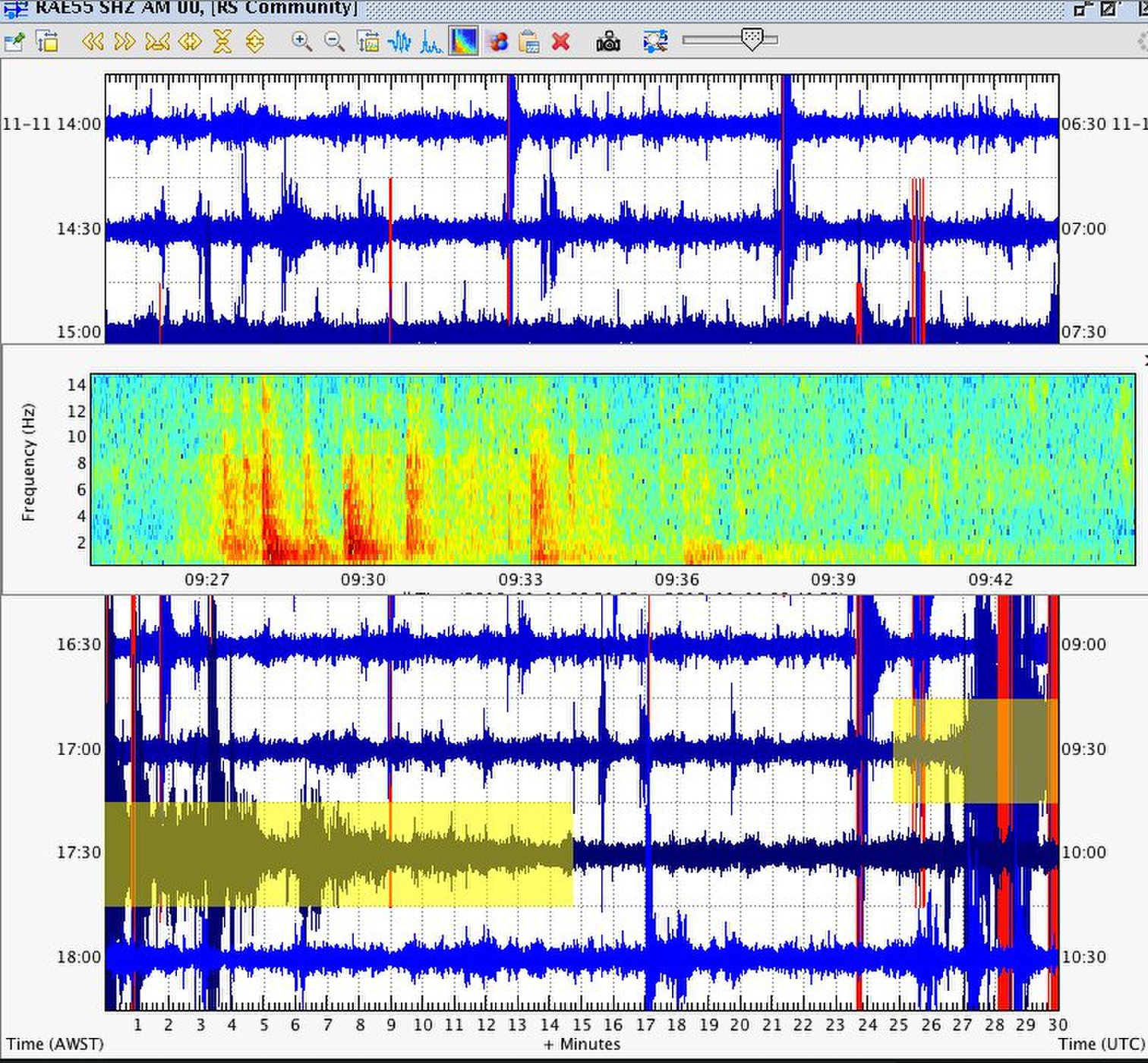 There is a fairly significant signal response in the 1-2 hz frequency range. This is mirrored by another response, albeit less intense at the 6-8hz range, and again in the 12-14 hz range, even less intense than that of the response in the 6-8 hz range. Those parallel horizontal bands represent fluid (magma in this case) movement as recorded by a seismometer.

The depth of this eruption (somewhere around 3km down) would allow for any gasses escaping to diffuse a great deal before it reached the surface and so all one might see would be some slight 'fizzing' at the ocean surface which might not be at all discernible from standard ocean foam; unless the water was glassy due to a becalmed sea, then the bubbles would be readily apparent, but I don't know for certain.

The gasses diffuse and dissolve into seawater. There are also horizontal currents to consider. (heh, like "chemtrails") At that depth it's more likely there would be no evidence on the surface.

Yea, back in the thread when there was just seismic evidence ( "Strange seismic waves originating off French Madagascar)
I thought it could have been a deep ocean meteor event. You certainly got it right with the volcano, but the seismic evidence was not definitive at the time.