sevens.exposed - Update- *UNSEEN INFO* Proof it may be a PRANK?

Sorry, I do not know everything about what you present and to understand what it says. I only connect the dots what I've found myself about this.

I once participated in a thread " lifting the veil" many things about this came clear and unclear to me. It goes deep very deep.

originally posted by: Pavlik
a reply to: zazzafrazz

This is what happened when I loaded the original .WAV file into a HEX editor.. 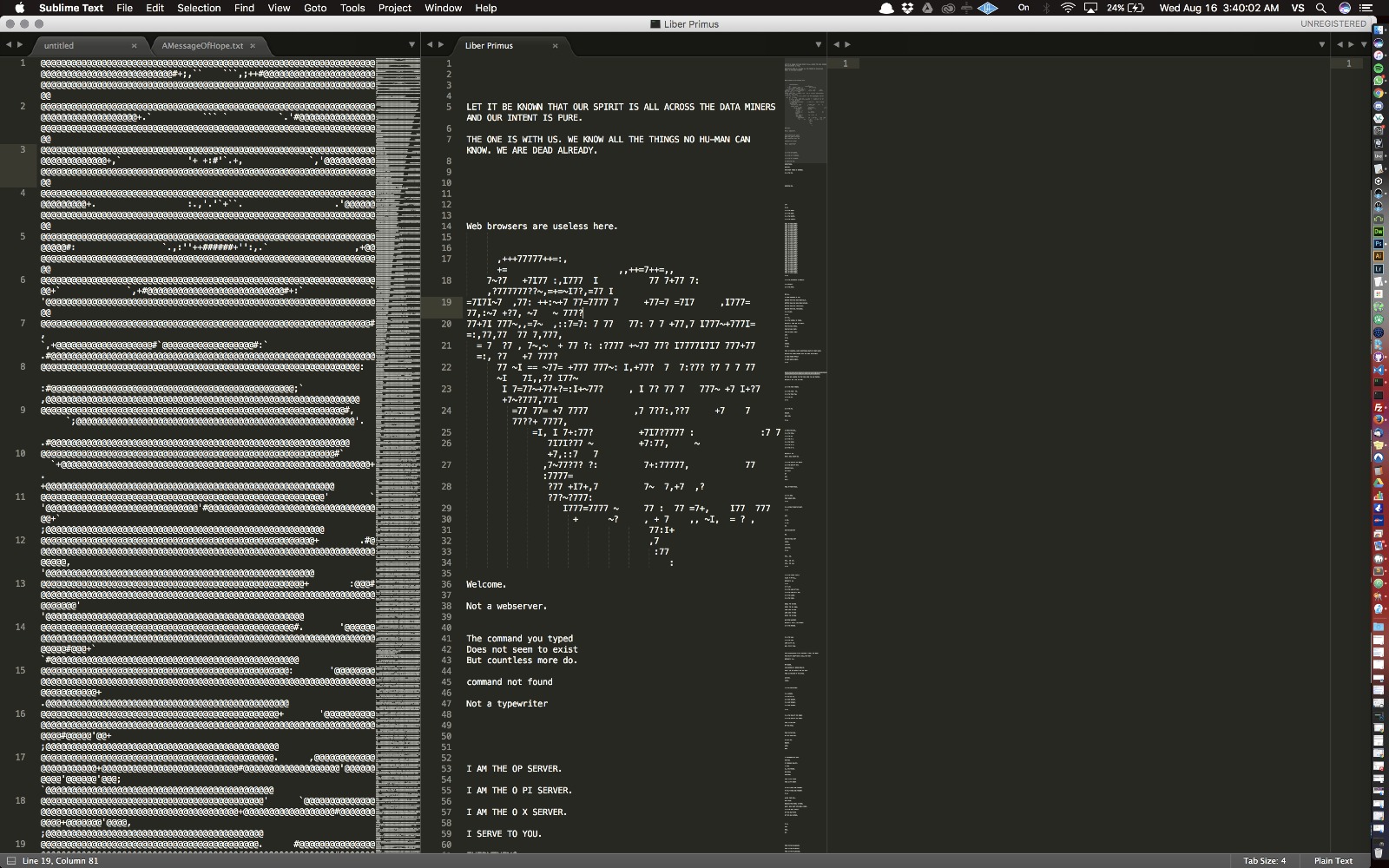 Wait, you're using a mac?
Those are practically linux under the hood- I didn't think mac users were so focused on file extensions, since they don't mean squat.
Does that OS have useful functions like cat and grep available on the terminal?
It seems to me that you have a poor understanding of digital files, and spending a little time learning how to use text based editors would save you a ton of time going down the path you're on.

I remember when this was a thing on ATS. I even remember downloading the file to see what we could make of it.

Since I love puzzles and all...never got the whole story behind it.

It really does ... deep as deep can go... and is scary because there were some big time people involved in trying to figure this thing out...... but I think I solved what it was by cracking their code and figuring tracing the software they were using. It's all just one massive crop circle. I've never added to those threads or posted by research, theories or opinions until now.......

There were 2 of us working on this at the time.

A lot of people thought it was these guys:


but after solving that the files were being made with software created by MIT ( supercollider.github.io... )

and the website being 'sevens'.exposed... and MIT address being 77 MASS Blvd.....

I connected the dots and am theorizing this whole CICADA thing is one MASSIVE prank by a bunch of really smart people. A modern day digital crop circle.

posted on Jul, 27 2019 @ 01:42 PM
link
I tried to put this in the 'research' section, but I didn't have authorization..... If the mods could please put this in the proper section, I don't want to piss anyone off. I only put it in the aliens section because of the original image it made... and because many thought these puzzles were otherworldly at the time.... even I got fooled and scared #less... so whoever did this.. their plan worked.

It's easy to create patterns like that when we know what we want as a final result.

Just look at this spectrogram from Aphex Twin's "Equation", with a special "appearance" at 5:30.

What is the name of the file you downloaded?!?! Do you still have it?!? That might be the file my OP speaks of!

originally posted by: 0bserver1
a reply to: Pavlik

you know what's strange I googled 'sevens.exposed' and immediately a video starts to run about ancient things not watched it entirely but it holds a message imo

P.227 of The Secret Teachings of all Ages, By Manly Palmer Hall.

Sufficient similarity exists between the Masonic CHiram and the Kundalini of Hindu mysticism to
warrant the assumption that CHiram may be considered a symbol also of the Spirit Fire moving through
the sixth ventricle of the spinal column. The exact science of human regeneration is the Lost Key of
Masonry, for when the Spirit Fire is lifted up through the thirty-three degrees, or segments of the spinal
column, and enters into the domed chamber of the human skull, it finally passes into the pituitary body
(Isis), where it invokes Ra (the pineal gland) and demands the Sacred Name. Operative Masonry, in the
fullest meaning of that term, signifies the process by which the Eye of Horus is opened.


I always thought of RA as separate entity, but all is within.
edit on 27-7-2019 by TheGreatWork because: (no reason given)

I'm seeing an alien grey with a rather large nose, like I'm on a Doctor Who episode, music an all, it being on the other side.

It like looking at some mirror of the brain.

Or is that a Spider Pig, I'm seeing?

All the cool kids do it now..

Yeah I know what it is..... I'm a photographer.. so I see the effect everyday in images I take.... Check out this one, I made connections of the same face in both the photo of a tree, a Mars imager photo, Easter Island, and Peruvian skulls..... Top left image is a pic of a tree...... 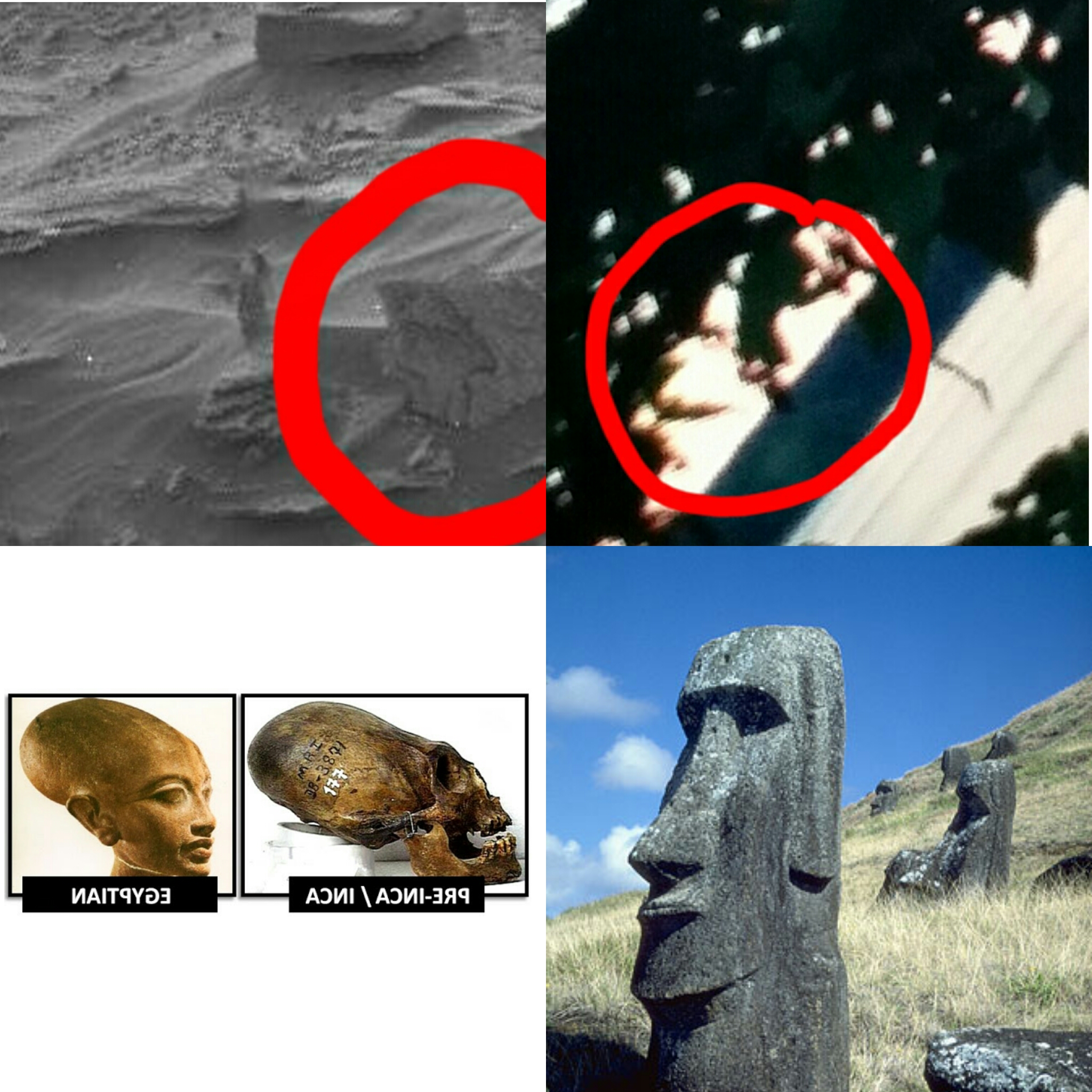 What was puzzling.. and I read everything the one guy said about the file conversions..... but I SWEAR.. this file was a .WAV ... It opened in Winamp... it said it was a WAV in all the windows properties options.. etc etc...... I know what he is saying to be true, but when I renamed it .txt... it made that long file, which looked like a spear.. and at that time EVERYONE was searching for this spear.....

The alien came when I manipulated the long file it made... solely because the top half looked like HALF a face... so I figured.. might as well fill in the blank. I didn't think it would look that SPOT ON.... especially down to the placement of the jewel and how similar it was to Bruno's photo.

Oh wow... This is exactly what was appearing in the files 2 years ago..... Saying words like:

"Your Not In Kansas Anymore"

I KNEW IT WAS HUMAN.... How the hell are people doing this??! Thank you for this post.

posted on Jul, 27 2019 @ 02:28 PM
link
I would like to assist. If I could believe that one individual could move through data with this depth... When the data is as disjointed and loose leaf as the original files were.

I have a tough time swallowing your origin story on this work. That being said, if you think there is some legitimate path to follow on this, involving a mathematical signal of some sort...

Do us all a favor, and do a one over check on some FRB data. Known signals to have come from across the universe. (Intelligent or not is open for debate, but I'll tell you right now, 99.99%+ of everyone looking at the FRB data is not equipped to solve the full signal. Those that do, stop talking about the technical details. It's not a path you can hold someone's hand for. You go and or they go.)

If you are meant to solve any of that mystery, I am certain you will find something of value.

originally posted by: Pavlik
What was puzzling.. and I read everything the one guy said about the file conversions..... but I SWEAR.. this file was a .WAV ... It opened in Winamp... it said it was a WAV in all the windows properties options.. etc etc......


It opened in Winamp and played or just opened?

File types in Windows work by using the file extension (except some special cases), so if Winamp was associated with wav files it would always try to open it but it wouldn't be able to play it if it was not a compatible file.

If you rename an image as .wav or .txt then the associated program will try to open it, even if it's the wrong type.


I'm seeing an alien grey with a rather large nose

Or a praying mantis with his arms in front of his head partially hiding the rest of his face?
Also, the other picture to me looks like the silhouette of that same mantis?

The beginning of the video clearly shows the geometry of life on earth as within the universe.

not from Spain, but from ancient France will be found in the temple of the vestas for as the moon thus led by its angel famine, fire, blood, plague all evils doubled the ready player, one who will unexpectedly meet his final year in shame, regret. a year of pain doubt betrayal, a judas without shade or tree The year the great seventh is accomplished that they will be the authors of a great conflict hidden cages will retain the hostages' stones cause multitudes to perish in waves... The market to collapse