Omar: Americans Should Be "More Fearful of White Men"--Racist or Not Racist?

posted on Jul, 26 2019 @ 11:57 AM
link
She has already shown her colors and they are not red, white and blue they are dark like the country she comes from, where if she went back to she most likely would be beaten red, black and blue by her beloved men there.

She has no business in congress.

posted on Jul, 26 2019 @ 12:16 PM
link
They know they can't take over the country till they control the old white men. Won't happen in my lifetime and they will hold out for as long as it takes.

Considering the black on black violence, the numbers are absolutely staggering!

I sincerely hope you get an A or at least some extra credit for all the work you do here on behalf of intersectional gender and race studies professors everywhere, but the vast majority of us don't subscribe to any of this nonsense, regardless of the contortions used to twist the definition of actual words to suit your argument.

It is racist to hate another person based on the color of their skin. It is racist to point at the skin color of another human being and claim that they are responsible for things they've never done, simply because they are white. Or Latino. Or Black. Or Chinese. Or whatever.

The power dynamic you and others who subscribe to this nonsense are attempting to create is racist. You hate people because of something they have absolutely no control of: their skin color and the actions of people who are not even them.

Where have I heard about african women coming to america?????
Oh I remember....


That may be true, but I would still submit we are better at war.
From sea to shining sea

No. Racism has to do with the belief that one's race is superior to all others. 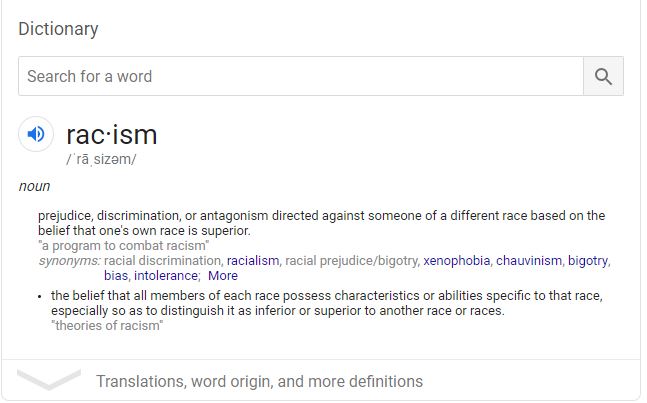 Simply typing the word into Google and hitting "enter" brings that much up. Power and privilege mean dick.

Yeah, but it certainly helped things along with those Old World plagues decimated the New World population down to about 10% of what it was before we really got over here in earnest.

Hell, I've been critical of Trump.

But it doesn't matter anymore.

Either think like them or you're a racist Nazi who eats tiny kittens.


Agreed, I will go with Trump, and I’ll support anyone who opposes the freshman of the apocalypse. 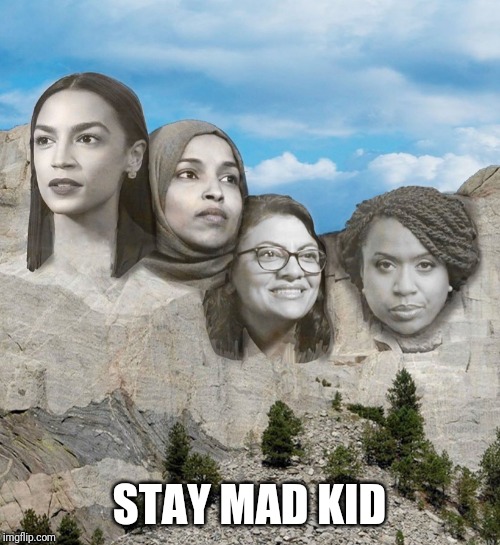 Tee hee, I like that picture. It looks like it's directed at the black girl on the right who looks angry.


Are you kidding me? I've been starring all of your posts for a long time because I like them, and you mean to tell me you're NOT white??????? This is a tragedy! Where's my safe space?!!?

What she said was not racist. Your inability to address the subject speaks volumes.


Yeah, no surprise you wouldn't see the racism in it. Heh.

Your response was foolish, immature and borderline moronic.

Omar is a racist.

Sorry it hurts your feels or whatever passes for leftist emotions but the world is looking at her and her defenders and laughing at your obvious lack of anything close resembling intelligence.

When someone says that people should be more fearful of the white supremacist terrorism than the Jihadist terrorism based on stats, the right hear the shrill dog whistle.

We've had an excellent object example as to why from a poster in this very thread. Critical Race Theory proponents are the ones who push that nonsense and it has infected the left along with intersectionality and moral relativism.

But to inject the idea that white is somehow evil, is a dangerous thing. Omar is walking on thin ice right now with those statements.
edit on 26-7-2019 by ADSE255 because: (no reason given)


originally posted by: Zanti Misfit
a reply to: TrumpTribbleAlien

So , you then AGREE with her Obvious Racists Comments ? No Condemnation of them ? For SHAME !

I wonder if your opinion is so cut and dry when someone says "the stats say that Black People on the whole are less intelligent than white people". That can be backed up with stats and years of IQ testing so I would assume by your posts on this page that that is that right?

Or how about 13% of the population (black people) is responsible for over half of all violent crime. That's ok too right? After all we have STATS to back it up right? No need to dissect it, stats are stats right?

Actually that last one is wrong because it's not 13% of the population. It's more like 6% as the group responsible for almost all of half of violent crimes is black males aged 18-45.

Just stats though right? Nothing to condemn there right?

Hey man, save your arguments, stats are stats bro.

Just kidding, I bet you have tons of arguments against THOSE stats. THOSE stats are clearly racist.
edit on 26-7-2019 by JohnS23 because: (no reason given)

The problem with your idea of racism is that you claim it is defined on the region they are in.

You say a black person in America can't be a racist which implies that if that same person was in Africa they would be. Which is wrong a racist is a racist no matter where they are. You cant drop a clan member in Somalia and all of a sudden they lose the racist status because they are out of power nor had any power they are still a racist.

No, the clan member would still be a racist in Africa if they were from America, because regardless of their placement, they would still be in a position of power from a worldwide standpoint. Have you heard of apartheid?

And, we are not talking about other places. We are talking about America. Here and now, people of color do not, have not, and as far as the current ways of thinking, cannot hold power when it comes to race. Our history makes sure of that.

This country was founded on genocide, and was built on slave labor. Both involved the displacement of people of color.

At first I thought you were joking. Now I see you are just naive.

Racism has nothing to do with power. A single clan member on the street in the south side of Chicago is a dead man, not a powerful racist. He may have racist views, but he has no power to act on them.

As for this country, I think you are very mistaken about people of color. They have a lot of power. If they didn't, there would be no miss black America pageant, no naacp, no black democratic caucus, no affirmative action, and so on and so on. If racist white men have so much power in this country where did all these racially defined programs come from?

The idea that this country was founded on genocide and built on slave labor is a tired old story that has no more meaning here than in any other country. Just because native Americans were here before the 1500's doesn't mean they didn't come from somewhere else. They didn't just appear here out of thin air. Were they the first to live here or did they take this land from someone else? The Clovis people are widely believed to be the first inhabitants. There is great speculation that these people were slaughtered by Asian invaders who came across a land bridge between Siberia and Alaska. Still more speculation regards the likelihood of people coming from south and central america. Laying the mantle of violent land acquisition solely on the shoulders of white Europeans is simply a lie.