page: 1
31
<<   2  3  4 >>
log in
join
share:
Dfairlite
+6 more
posted on Jul, 23 2019 @ 12:28 PM
link
According to rapper, Zuby, liberals are now right wing and possibly even extreme right wing. He lays out a great case and explains they have no one to blame but themselves. It's sad that a major political party has allowed such a hijacking. Pelosi is struggling to deal with it. Which is funny in it's own right, as she was a left wing loon just a decade ago. 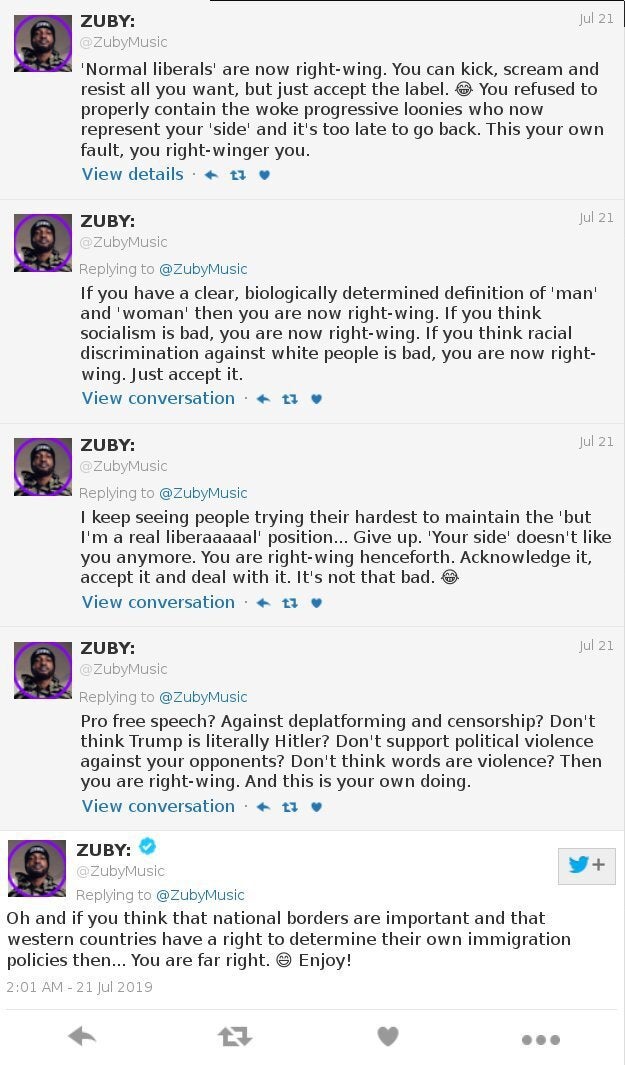 I swear it feels like this place is getting dumber by the day.

Its nice to see though that the right are now turning to "Zuby" for lessons on political ideological philosophy. So I will give you that.

We all know most rap is crap with a silent c, the problem is most of them have a bloated ego and whatever they say goes.

Honestly sometimes I get asked a question and its so stupid my brain just can't compute, you want me to refute the statement that being pro-free speech or anti-racist makes one "right-wing".... 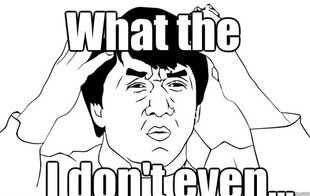 We have kind of reached this sad point now on ATS where it doesn't matter what anyone says, so long as it hits the right political buttons it will get stared, flagged and pats on the back all round even if its utter bollocks. Thats what this is, utter tripe that hits the right political buttons that in no way reflects the liberal ideology.
edit on 23-7-2019 by OtherSideOfTheCoin because: (no reason given)

Of course that completely misses the point. The point is the current monopolization of "mainstream" left wing politics by radicals. They call everyone right of stalin, "right wing." Now sure, in the traditional polarizations, those people aren't actually right wing, but the point is, the left wing hates them just as much as they hate the right wing and in so doing they provide a common ground for the right and traditional left to unify under the right wing banner.

posted on Jul, 23 2019 @ 12:55 PM
link
There is something of a point there. But, it is also predicated on the notion that this new religion defines everything for the rest of us. And, just like everything else like that, I refuse to bend the knee.

There are fascinating studies about how "the left" has moved drastically, drastically away from things. I may believe examining it as a religion is more beneficial, but most is done in the context of politics.

I also reject the idea that we "let this happen," or that it is "our fault." Some of us were warning about this well over a decade ago, only to be met with laughs and "the left has always been insane lolz."

Yeah.. Well.. See what we were talking about now?

Its not like anybody else is doing much better in "containing" it either, because there are factors (like institutionalized support) that render such attempts impotent.

ETA:
The more I think about it the harder it gets to pin down when the crazy began. First wave feminism, sexual revolution, ted kennedy conspiring with the russians against reagan, etc. All of these could be turning points, but to claim one as the start is almost always predated by another event.
edit on 23-7-2019 by Dfairlite because: (no reason given)

Maybe I should've started with an easier question. You do realize what the point of the OP is right?

He forgot to include the brown and black people who "don't want to be a brown/black voice".

I think it could be argued that it began 20-30 years ago, but Im not really convinced of that. Too much of it would require a level of prescience that Im not at all sure existed.

Like I said, plenty believe this was just a natural course of events, but that minimizes what I believe is happening here. If we examine it even a little, it becomes clear that even if one hated the left 20-30 years ago.. They are now in direct opposition to perspectives and beliefs held then. Of course, they still claim the same positions, but actions speak louder than words.. Despite the language specific headspace from technology that results in some saying otherwise.

No, I believe this was a very targeted, intentional operation that might have been "in the works" 20-30 years ago, but was not actually "in play."

Then, it was all firmly cemented in ~2012 (iirc), with a coordinated effort to limit peoples thinking in very specific words and ways. During this time, we see a massive uptick in the use of all the buzzwords we so "love" today. This all happened in a relatively short time frame, and across immense amounts of platforms at the same time.

I have my own ideas of why this happened, but Im not sure it matters. I think there is still the definite possibility of containing it, but it will require some pretty unlikely events.

Regardless, I see more and more people buying into the narrative, even if its in opposition. Thats the treacherous level of stuff we are working with here.

I, for one, will not accept that this new religion defines.. any of this for everyone else. No, we have a social group spiraling into derpville, signal boosted by technology and our inability to comprehend scale, and the rest of us are just about where we have always been. For now..

posted on Jul, 23 2019 @ 01:26 PM
link
Most “liberals”, at least in congress, support wars, corporate profits, interventionism, etc. so yeah, they’re right wing. If you’re supporting pelosi, Clinton, and all those associated then you’re just as rightwing as the republican right. Neoliberals and neocons are closer than kissing cousins.

ETA:
The more I think about it the harder it gets to pin down when the crazy began. First wave feminism, sexual revolution, ted kennedy conspiring with the russians against reagan, etc. All of these could be turning points, but to claim one as the start is almost always predated by another event.


Actually, you're correct. I am more an more convinced it started when the "People" lost control of the government to the Deep State back in about November 1963. Ever since then the left has moved progressively toward subversion of the Republic at an more alarming rate each election cycle.

I actually wouldn't be surprised if the left was now found to be underpinned by Socialist and Communist governments trying to overthrow America and other democratic republics. The left may not know it, or realize it, but they are likely being programmed like puppets on a string by the communist / socialist propaganda machine. Unwitting Komrades in arms. They are so far over the horizon to the left that you can't help but think the end-game is to just create so much civil unrest that it destroys the nation.

Thank you for being honest.

posted on Jul, 23 2019 @ 02:32 PM
link
The Democratic party has always been extreme right-wing. The phrase refers to the conservative or reactionary section of a political party or system..

The Democrats pushed to keep slavery in place. The democrats fought against civil rights and equal treatment of black people. The party is founded on maintaining the status quo of white dominance in economics, politics and society. It's just the full of s**t media that tells us that they are the left, and we - like the obedient sheep that we are - lap up their lies.

posted on Jul, 23 2019 @ 02:44 PM
link
Zuby? Never heard of him. But I bet he knows what a garbage disposal is.
Maybe he can explain to AOC what the other switches in her apartment do.

What Mr Zuby fails to bring forward is that what he's doing and saying is exactly what right wing mentalities do. Take subjects, take groups, etc. and file them neatly into a little box and say "OK, these people are now _____" and move onto the next, when the subject is brought up they unfile the box and make revisions as needed. Zuby has literally just done that.

I don't think a lot of people grasp the concept that right and left leaning thinkers are a ying yang type of thing here with centrists making all the decisions.