posted on Aug, 1 2019 @ 02:43 AM
link
what do you think of Boris and his cabinet making moves on legalising the mary jane

is that just a vote grab ?

But it goes to the heart of the problem with the EU as well.
Left alone I'm certain we'd be able to come to some mutually beneficial agreement with every single nation state inside the EU.
But the EU will not allow individual states to negotiate with us..so effectively they have no individual sovereignty.

Isnt that the sum up of the whole EU project ? TOTAL control.

And isn't that what the Brits dont like? in the back of my head I am hearing


We need to stand united and stand up to these bullying autocrats.

showing the other dissatisfied members there IS a way out!!!!

As you know I'm no fan of Boris but he really can't win with some people.

The EU is unbending, uncompromising and incredibly dictatorial.
It allows its member nations no room whatsoever to negotiate individual deals regardless of that nations best interests.
Effectively it strangles all notions of sovereignty.

The whole Brexit farce has reinforced my belief that it is imperative that we leave the EU, deal or No Deal.

And I'm absolutely certain there are elements in most EU nations who are watching developments closely in the hope that our Brexit inspires something similar in their countries.

Boris can huff and puff about a no deal exit as much as he likes but I can't see it going through Parliament, or am I missing something?

And therein lies the heart of the problem; parliament is not representative of the will of the people.
60% of constituencies voted to leave yet 80% of MP's are Remainers.....you really didn't have to be Nostradamus to have foreseen major problems.

There have been conciliatory rumblings coming out of EU nations since Boris stated that No Deal most definitely is an option.

I have no idea how that No Deal could go through The Commons at present....but it was a massive mistake for May and parliament to rule it out.

Is there a constitutional crisis on the horizon?

Dunno about a constitutional crisis but I have a feeling that the excrement will shortly be interfacing with the rotating air circulation unit.

I just keep stocks of popcorn in to watch the show, however it pans out it ain't in my hands anymore, had my vote, lost, moved on, roll with it.
...Oh, and sweet popcorn, like at the cinema 👍

thats just the thing I can never understand, an X in a box , doesnt do anything
our votes are like kites in the wind !

It gives the illusion of power and inclusion.

And then there are the people who simply vote on the off chance that it does bring about change.

But it's never real change because one side always wins.

And its the same side, or at least the monies and power behind such are the same.

LOOK HE's BEHIND YOU !

I just dont understand why people just go along with it , they feel helpless , powerless ?

unable to affect change, or is it just apathy or a mixture of everything .!

I've been after the big red doorknob for years.

Anyhoo we have a big blonde one for PM now. 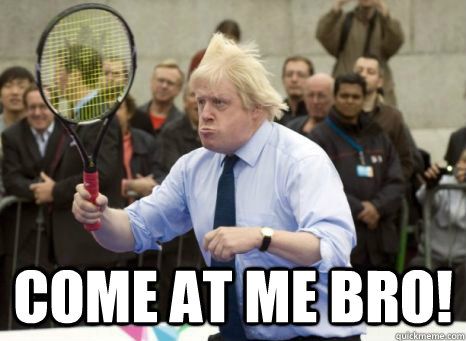 That indeed is negotiation....... NOT May's feeble attitude of "what would you

like, and I'll see what I can do for you" Barnier has said that not once, not

months that was her mantra to the country!! What was she playing at ...... she

wasted THREE years we could/should have been out by now, and moving


Splitting their sides in mirth no doubt, the butt of many a joke?


Boris can huff and puff about a no deal exit as much as he likes but I can't see it going through Parliament, or am I missing something?

It might help if there was less negativity from the BBC ....... Watching news and

political discussions all you get is IF IF IF instead of WHEN. They are also

to leave and we are only going through the motions.......till as always happens

Do they honestly think the EU leaders are not watching every move????

Thanks to Parliament our negotiating position was: "Give us a deal or else we will...........actually, can we just have a deal? Please?"

posted on Aug, 1 2019 @ 08:43 AM
link
So we can expect Boris and his cabinet to start doing all sorts of things which will garnish votes

such as cannabis legislation 180


That's a good one, how about £100 fixed penalties for two or more people walking side by side in the same direction on a pavement while pushing prams?
I'd also support moves to decriminalize the trapping and killing of pigeons for food purposes...all I see when feeding them in town is a big fat pie in my mind 😂

I don't think you want to be eating that kind of pigeon meat Silure.

They don't call them flying rats for no reason, manky bastards and then some.

And no wonder considering the pollution they are exposed to.

all high rise building to be built with fire safety measures as mandatory or companies
will be made to pay increased fines equal to the sum of life insurance policy pay out and life lost in initial greenfell accident , greenfell legislation

Union laws changed to allow for not 50% electoral turn out