The Forgotten Founder Of Science Fiction 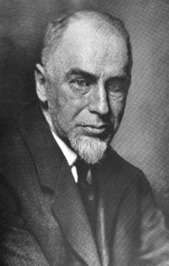 This man basically invented every sci-fi concept there is, and you almost certainly haven't heard of him.


It wasn’t until forty years after his death that Edward Page Mitchell was identified as the author of The Clock That Went Backward, along with a multitude other short stories which unveil the work of a visionary who has been shrouded in obscurity for over a century.
Source


Edward Page Mitchell wrote some 30 stories that would introduce an incredible number of what would now be considered fundamental concepts in science fiction storytelling. He operated anonymously as a professional journalist and released many short stories with fantastical new ideas decades before H G Wells would even touch on them.
The only work carrying his name (though also initially credited anonymously) was The Tachypomp, a story about a device capable of infinite speed.
With such obscurity surrounding his writing, it's no wonder that Mitchell's legacy has been a quiet one.
Astounding still that so many great story elements came from one mind! This guy is practically the Shakespeare of sci-fi.

With that story, fantasy gave way to sci-fi. Mitchell would go on to write what are almost certainly the first accounts of a computerized brain and cryogenic freezing (in 1879), personality change via surgery a year later, a time machine and an invisible man (in 1881 — seven and 16 years, respectively, before H.G. Wells did so), a friendly alien (1883) and a mutant child with mental powers (1885)Source

Here's a chronological list of some of the concepts he introduced:

1877: "The Man Without a Body,” which featured the first reference to a scientific teleportation

1879: The first fictional computerized brain (a neo-electronic thinking computer functioning in the head of a human)

1880: Personality change via surgery in "The Professor's Experiment"

1885: A mutant child with mental powers

From light-speed to cryonics, Edward Page Mitchell seems more a prophet than an author and if it is indeed true that such ideas originated with him, his elevation into the pantheon of science fiction genius is long overdue.

That would place him in the top 3 first, of what we would call, modern day science fiction as we know it. After Mary Shely and Jules Vern.

Very interesting and thanks.

No political baiting? No trolling? Refreshing, new information? (to me).

Wonderful thread, thank you. Would give you a hundred stars and flags if i could.

I will surely give these stories a read.

I wouldn't have put shelly in the sci fi genre.

Definitely not the top 3.

Refreshing thread with great links!
Thanks

I got to take a look at these stories

Sorry to piss on your party, but

1863 Samuel Butler " Darwin Amongst The Machines "

The first ever invisible man.


That's only a couple i know about, i am sure the others you have listed could also be found in earlier works.

originally posted by: grey580
a reply to: Bluntone22


I find Shelly's " The Last Man " a very interesting novel.

Set in the future of 2073, it tell the story of humankind being wiped out by a virus. Written in 1826, it was probably one of the first of that genre.

Well worth a read.

posted on Jul, 23 2019 @ 03:53 PM
link
a reply to: ADAMandEVIL
Getoff! I can beat that by nearly 2 thousand years. The most widely read sci-fi book of all time. The Bible. It's got all your parameters. Good aliens (angels) bad aliens (the devil) child with mental abilities(Jesus), teleportation (the ascension) and the list goes on.

posted on Sep, 30 2021 @ 03:51 PM
link
Thanks for this, I'm interested in science fiction literature and am not familiar with Edward Page Mitchell. Going to change that, though.
BTW, Mary Shelley absolutely belongs on any list of top important sci-fi writers. The 200th anniversary of Frankenstein; or, The Modern Prometheus in 2018 produced a ton of great books on the subject. Also, great to see The Last Man mentioned, as that one is not well known.