posted on Jul, 10 2019 @ 09:46 PM
link
Pack your shades, your sunscreen and your coziest tinfoil hat, because the late-summer event of the season is happening in Nevada's scenic Area 51, and you're invited. 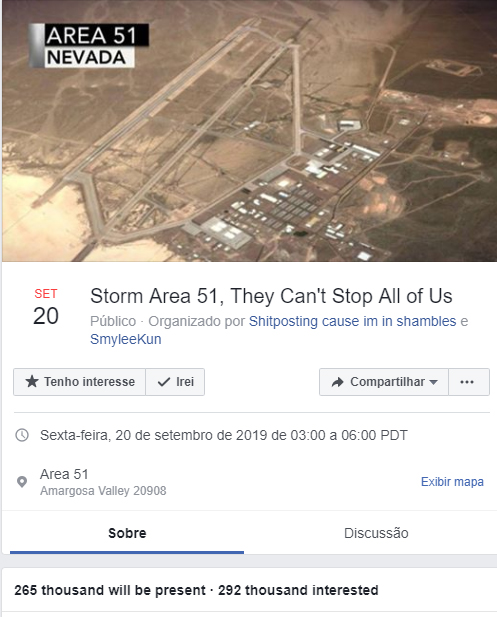 It's not too far and I've wanted to go check it out, but I have a job and responsibilities and stuff. I'll keep my eyes peeled for the live-stream though.

Dude they will shoot everyone that crosses the installation perimeter. Those FEMA coffins that the government bought will come in handy. LoL

Anything of value is already gone, at most I would expect sonic and microwave crowd dispersal devices. But the Govt. isn't going to gun down American citizens on live stream.

posted on Jul, 10 2019 @ 10:24 PM
link
So once they get to the first locked door, what is their plan? I mean, if they’re actually hiding alien tech on this base, I’d also assume the tech to lock this stuff away is out of this world as well.

“ use of deadly force is authorized “

posted on Jul, 10 2019 @ 10:40 PM
link
Everything Cool will have been moved to other bases or underground by the time this kicks off. And as has already been said, the Govt isn’t going to gun anyone down. They’re either use non-lethal methods or actually allow people on the base and give a “tour” claiming....“See, no aliens”.

originally posted by: Zaphod58
a reply to: Frocharocha

Well 2 or 3 of them might have Permissions slips signed by their mums.

What if area 51 wants to test their new security procedures and started the event, lol are these amateur conspiracy theorist or what?

Area51 security director: we need to see if we can prevent 250k people from coming in at once.

Area51 manager: sir we dont have the budget for this and liability will be to high

posted on Jul, 10 2019 @ 10:46 PM
link
IF .. and it's a big IF .. we're to happen the idiots have given a date of when they are going to do it. And another big IF .. that if there's anything remotely super top secret it's not not going to be held behind a small flimsy door. And given that they have a date for when this is going to happen it's giving the Air Force plenty of time to ship stuff off site.

Anyways they won't get near the base

They might, but that will get them onto the bus to get them to the kick off point.

So are these a bunch of "asylum seekers" planning this raid on an American military base?

posted on Jul, 10 2019 @ 11:34 PM
link
As I said in the thread from a few weeks ago. I wish these many people were passionate about storming the Vatican vaults. There is way more information in there than we could ever hope to find at Area 51

This is dumb. Do not do this. You will be shot. No one will care.

For the soldiers at Area 51 security, thinking in your own head. "If this actually happens, I'll just make the decision, not to shoot them."

If you do not shoot them, rest assured, secondary protocols will follow-up, whether the "alien conspiracy" is real or not. Uncle Sam will 100% set off and nuke the whole area. Our military protects the secrets it knows, as well as the secrets it does not know, if they are happening on their bases.

So, event organizers. If you do this, you die, the soldiers putting down their guns die.
At the end of that, everyone who doesn't believe random conspiracy crap will be the only ones left alive.

So, those willing to start a conspiracy will tell everyone else it was some country using underhanded tactics to start a war, and they nuked the area, not the US.

A war will happen, involving all of those people, and some will survive, but all the idiots who thought to themselves. "We'll find out the truth!!!" diving into a line of gunfire at Area 51 on September 20th... Will be long forgotten, and anything they actually learned will be forgotten.

Then again, I'm not Jesus. I'm not out there to save lives. If you want your worldwide bs holocaust, go ahead. I'm not standing behind that idiocracy, and I'd rather see everyone planning this, get thrown in jail for conspiring against the United States military, than be shot to death for being a complete imbecile.

MODS, YOU SHOULD DELETE THIS THREAD. IT COULD BE LEGISLATIVELY GRAY AREA, AS KNOWINGLY ADVERTISING AN ACT OF MILITARY TREASON AGAINST THE UNITED STATES OF AMERICA.
edit on 11-7-2019 by Archivalist because: True facts

posted on Jul, 11 2019 @ 01:25 AM
link
They have no idea how vast and inhospitable the area is. Most of theses keyboarders will disappear and die of thirst. David Paulides can write another missing 411 book.

I would like to go along just to watch but I doubt that that many people will actually the. Up.

posted on Jul, 11 2019 @ 02:00 AM
link
You can't just go into a military base unauthorized. It does not work out that way and NEVER will, I don't care how large a group tries. Not gonna happen.

All roads there will be blocked, probably by State Troopers since they are a bit less likely to just shoot people dead. 265k people will not even get close to the base. They will never even see it.

Also, people going better book hotels early in nearest towns so they have comfy place to stay when they travel to go see a big load of nothing.