The Eerily Accurate Predictions of Cyberpunk 2020

Found a very cool vid from a channel that I just adore. And since I'm a pretty boring guy, I'll let that video do most of the talking.

The gist of it is that there was another tabletop card game called Cyberpunk 2020. And like the Illuminati/NWO card game, this one is a disturbing example of when life-imitates-art-imitates-life.

The setting of the game is a dystopian America (I love that ATS doesn't even recognize 'dystopian' as a word, but I digress,) where identity politics rule, and deviations from the mainstream agenda are classified as mental illnesses.

It is now accepted among historical scholars that in the decades before the Collapse, America suffered from the sicknesses of racism and "cultural identity." Everyone wanted to be seen as special. Every group had to be "equal" to or preferably better than its neighbors, and fought to protect its "special" rights. If anyone had something that someone else wanted, they were painted as racist, sexist, elitist, or worse. This divisive "me first" attitude eventually tore the fabric of American culture apart and caused it to self-destruct in a fireball of competing ideologies, none of which truly recognized each other's validity. Diversity led inexorably to anarchy.

Tell me this isn't a painfully accurate prophecy about life in 2020 America as described by the game's prologue.

It also seems to predict a mass influx of immigration into western Europe, and the commonplace narcissism that the social media age has brought with it.

But I'm sure like all those weird Simpsons episodes, it's all just coincidence. Right?!

Just watch the vid. It's practically like looking at the playbook of TPTB.

posted on Jul, 9 2019 @ 12:08 AM
link
It's the same thing as the "Prophets of Science Fiction" predicting everything we have now, how we live now etc through the fiction of their stories in generations past, some several.

How did they know?

We can use our imagination based on what currently exists and how much technology has advanced in our lifetimes. As the author, these are the bearings from which to plot the story in a realistic way, at least what realistic would be in the setting written about. If it seems logical and believable to the author, it'd make the call as to include it or not.

It's not prophecy, it's good aim.

The creator of the YouTube video you linked was looking intently into subjects he could talk about with having interest in while stoned to get views and subscribers to generate revenue from his channel. Looks and personality only go so far.
edit on 7/9/2019 by r0xor because: (no reason given)

It's a pen & paper game, not cards.
And it's not predicting any real landmark events like the illuminati it's just "thinking through" what was obvious all along.

When was the game created? Whomever created it was definitely following social and socio-political trends for a while and then speculated on the worst of the characterisitcs of the culture out to its worst conclusion. It's only sad that instead of reigning in the ugliest sides of our culture, we ran with them and here we are. The quote you supplied from the game is mostly an accurate picture of today and our near future. 😢

Games are important man! Pay attention!
No sorry, after your answer I actually feel pedantic and bad.

My point is I truly believe we all have in us the power to tell the future to some extent, if we don't intent to tell the future and just observe and let our creativity flow.
And then there is the Star Trek conundrum when phantasy about the future inspired backwards to create the future. It's all very fascinating.
And maybe we can learn something from playing more games?

Yes, it's the writing on the wall that's been there for more than 30 years.

I did not mean to imply that this was some crystal ball scrying prophecy from beyond the stars.

It doesn't mean it's any less important, or less interesting to discuss.

It used to be a thing here on ATS those illuminati game cards...but that was in a time before ATS became this website for political discussion and it was actually about weird conspiracies.

And there is the issue that 99,99% of "creative art" nowadays is just self-centered horse#. We got an output that's higher than ever before so we could never tell which one is the playfull oracle lighthouse in the fog.
And believe me I know how much # can be created...most of it is completely nonsense. But then you have big events casting their shadow through time & consciousness... sadly we can only tell in hindsight what's the good stuff.

You mean when people were talking about mind control and not living it?

I believe it started with the coincidence between 9/11 and these cards.. 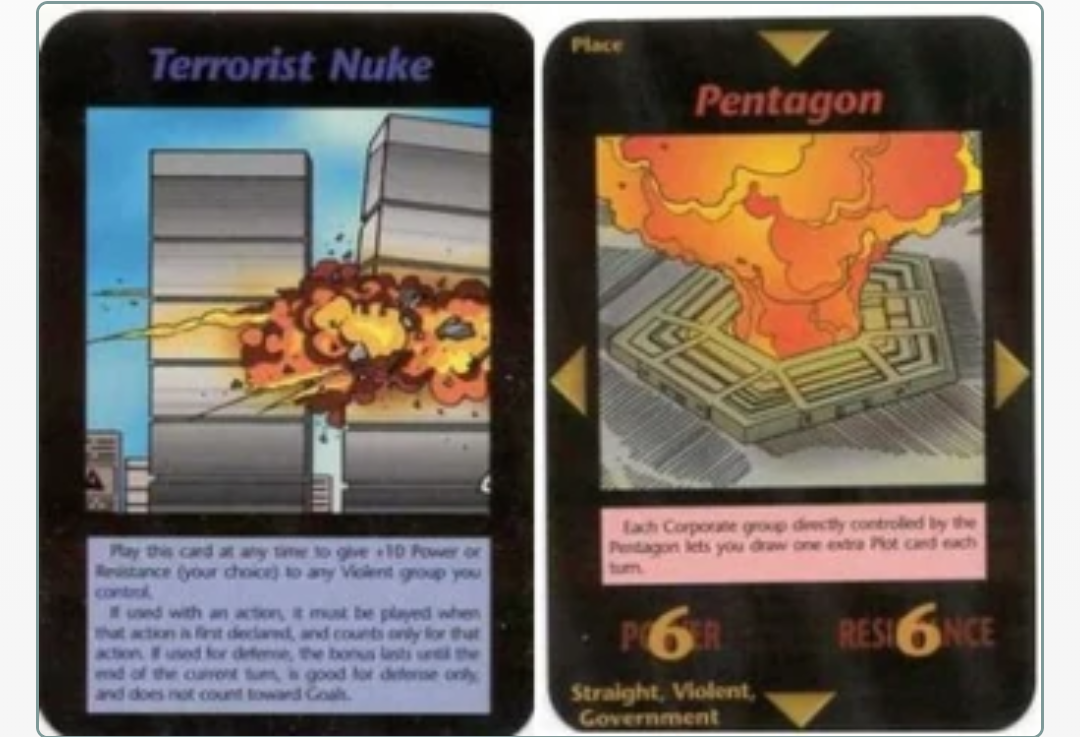 Later the BP oilspill and the Boston marathon got in there. I believe the cards are from a game somewhere in the 70's.

I always liked those threads.

posted on Jul, 9 2019 @ 02:32 AM
link
Steam punk is another branch of the cyber punk stuff, maybe its nothing but if the gas stations do go offline will be handy to know how to build a boiler.


Michael Alyn Pondsmith is an American roleplaying, board, and video game designer. He is best known for his work for the publisher R. Talsorian Games, where he developed a majority of the company's role-playing game lines since the company's founding in 1982.

Good find I’d not heard of this game before, I don’t think the predictions are mere coincidence though, there were quite a few things from back in the day that seemed to accurately predict the future. I don’t believe they were making predictions as such though rather they had knowledge of the plan so to speak.

originally posted by: NarcolepticBuddha
, and the commonplace narcissism that the social media age has brought with it.

This times a million will equal the worst dystopian future for us all, with so many people falling foul of there own voice, beliving their own snip smells like roses

In general though i believe authors latch onto societal problems and see where their imagination takes them, the reality will probably be worse....yikes

originally posted by: kwakakev
Steam punk is another branch of the cyber punk stuff, maybe its nothing but if the gas stations do go offline will be handy to know how to build a boiler.

Cyberpunk in this case is a tabletop RPG, one I've spent many hours playing over the years (in fact, out last game isn't finished, I believe we're currently in a high security vault, in the middle of a skirmish with the security team, attempting to liberate something from the vault that, we were led to believe had been stolen from the person we were hired by. It was a double cross though, one of our team was in on it and we are actually stealing the item, we all agreed we'd come too far and got too involved to walk away without payment. We haven't played in about 15 years...)

Steam punk is an offshoot of Cyber punk but the RPG we are discussing is loosely based on the culture as if it were still a think in the future...
edit on 9/7/19 by djz3ro because: Hit enter too soon 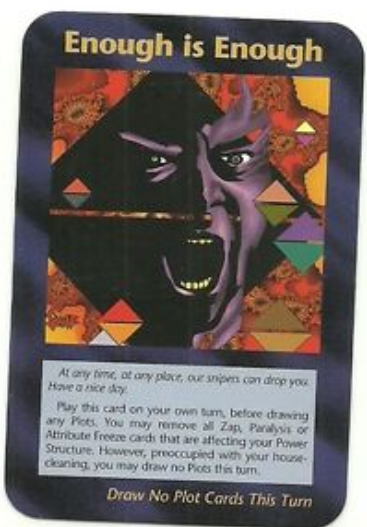 Just still waiting for the sniper.
And 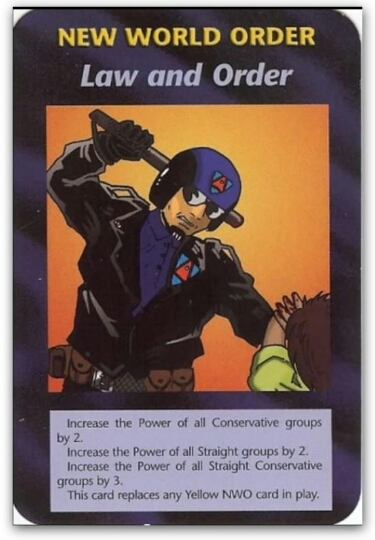 "Conservative" groups if you read that as right wing have increased in power.

posted on Jul, 9 2019 @ 10:29 AM
link
That game is created by CD Projekt Red and they've been under fire from libtards/sjws for a while. Only now with Cyberpunk they dont seem to be backing down or apologizing to all the soyboys out there crying about it.

They also own GoG.com.

posted on Jul, 9 2019 @ 10:47 AM
link
I don't know about this game, have not researched it yet but I have always believed that from long ago manipulation by demons (yes I know people laugh at the word) is always ongoing, because as you can see in cases like John Dee and many others in history and throughout time, they know things about the future. They add in lies every single case maybe because they don't know but a small part. They do try to use that against us.

They don't know everything but they are still clearly allowed to know some of the future.

Matthew shows that Jesus himself has not been told some things.

32 But as for that day or hour, no one knows, not even the angels in heaven, nor the Son, but only the Father. 33 Be on your guard and stay alert! For you do not know when the appointed time will come.…