Wiki edited Clinton out of Epstein’s bio but left Trump in . Re-edited after they were caught .

page: 1
44
<<   2 >>
log in
join
share:
Fallingdown
+20 more
posted on Jul, 8 2019 @ 09:40 PM
link
Anyone can edit wiki but there is a approval process. How is something like this able to get through that system ? This was clearly politically motivated and someone needs to be held accountable. Because of the editing process Wikipedia should lose the immunity( never should’ve had it in the first place ) status given under US code 47 section 230 .

Be that as it may this is a perfect example of the left’s biased and unscrupulous behavior . It may hav been independent action but it still shows hatred and dishonesty that is constantly emanating from th m . Led by a constant diet of hate and division from the mainstream media and senior politicians .

My big question is.

What is wrong with these people ?

They many will take such action with total disregard for the victims .

Whoever did this doesn’t care one iota about the children that were abused they just want to get Trump at any cost.

After a mass shooting their politicians will climb atop a pile of bodies and preach for gun control . While shedding crocodile tears for the cameras . ( not including congressional softball games )

The same charlatans faking outrage at how immoral it is to be protecting the border while the bodies pile up in the desert on the other side .


They don’t need political positions to advance their agenda they need canon fodder.

That turned into a unexpected rant sorry .

Here’s what they attempted on Trump. 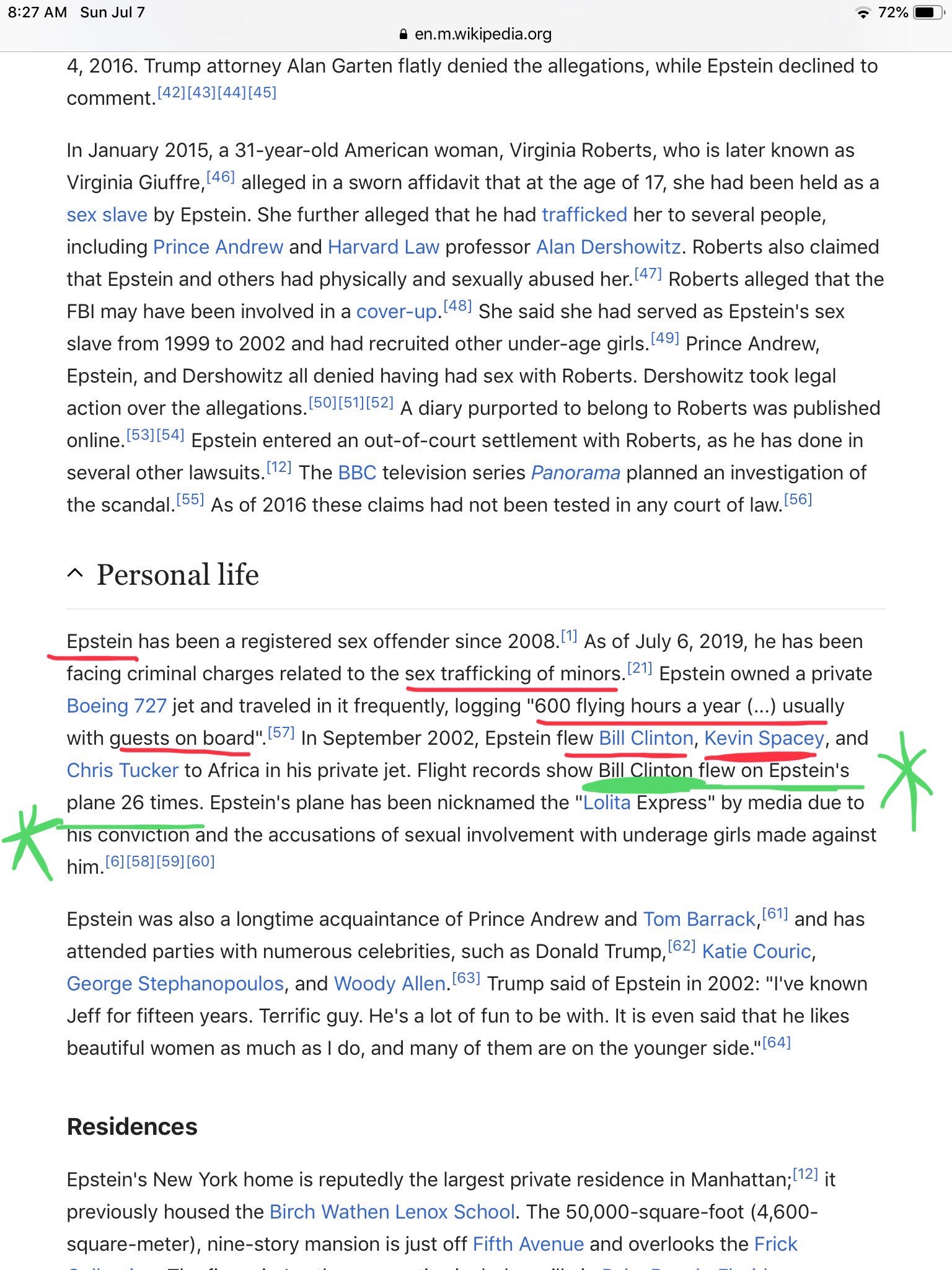 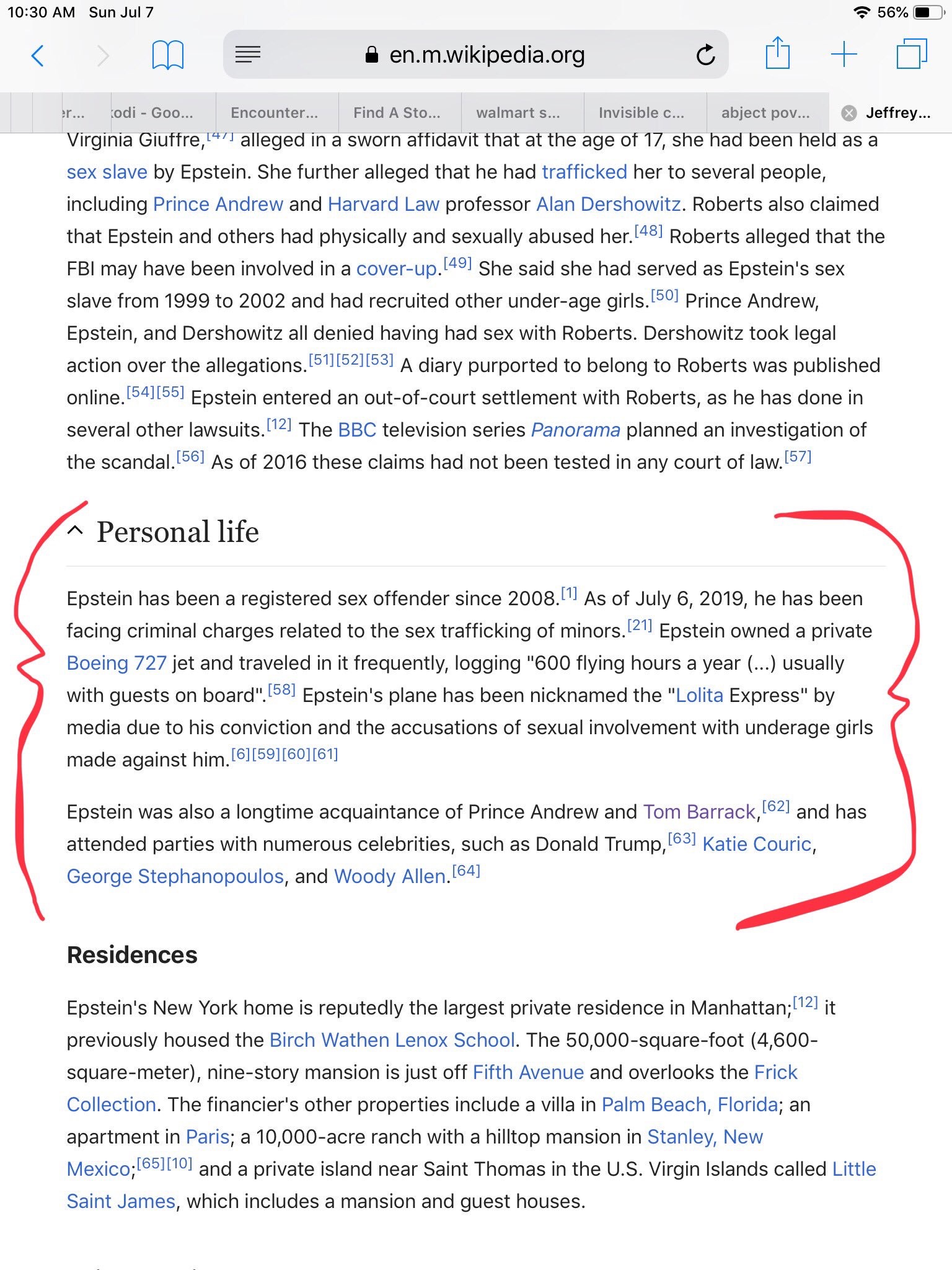 
edit on Mon Jul 8 2019 by DontTreadOnMe because: spelling in title

NOT because trump is some evil mastermind, at this point it just might be(maybe) that the majority of americans have finally awoken to the pathetic theater that they use to control the masses.

If that's so, I've never been happier about being wrong(about the intelligence of the average person).

I hope this is truly the precipice of the tides changing into one where the "average" man holds those accountable for their actions(on all sides of the political/social/economic) fence.

posted on Jul, 8 2019 @ 10:02 PM
link
Wikipedia is a biased source of information. They are financially dependent on donations. With enough of a donation comes the power to control content on Wikipedia. There are actual paid teams of people who are "super editors".

Sorry it took so long to get back with you I was shopping. Well reading ads anyway, has this place is like eBay lately .

I’ve been genuinely worried about whether Trump will get reelected until the last few days. Not anymore, the Democratic Party isn’t just shooting theirself they’re sticking their leg in the wood chipper !

The Democrats have become unhinged and I agree normal Americans have had enough .

Trump will win because of their lunacy. For the same reason he won in 2016. Half the country doesn’t vote but the left’s positions will draw more traditional non-voters out.

They won’t be counted in the polls again and they’ll probably be silent for the most part to avoid the wave of shame that would come down on them if they spoke .

We need and I’m sure will get the silent majority .

posted on Jul, 8 2019 @ 10:16 PM
link
I was listening to NPR this morning (I always do in the morning) and their lead story on the Ebstein issue was apparently about Donald Trump. The leading paragraph was about how Trump once said something nice about Ebstein.

Here you have a guy going to trial for child molestation and according to NPR the most important angle on the issue, their leading subject was something Trump said once a decade ago.

I like NPR; that's why I listen to it during my commute. I know their political biases and use that as a data point when I consume their news. But this was beyond the pail; they were using the horrible events these children had to go through as a political tool. Unexcusable behavior on their part; had to turn it off and listen to the strait news on the traffic and weather am stations. NPR always goes into over drive when elections come up; but never this early and this bad.

posted on Jul, 8 2019 @ 10:41 PM
link
NPR and PBS are horrible sources of information. Heavily paid for by well funded companies and institutions wanting to influence politics.

That would be fine but the public is also funding it with no choice. All the head voices are left leaning. They do have token conservatives but not enough to matter. The XL pipeline for example. It's already built. Just one section Obama was holding in his back pocket that crossed the border for political insurance. NPR made it seem like the pipeline didn't even exist. They did not discuss it was costing taxpayers more holding up the last leg due to lawsuits because it was ALREADY agreed upon. Obama was holding companies that spent money to build it political hostages. That is what happened. Nothing to due with native Americans, wildlife, pollution. It was a political weapon.

posted on Jul, 8 2019 @ 10:47 PM
link
Wikipedia is a good source for technical information, but when it comes to people information the website has had a bad reputation for a long time. Lots of issues with the moderators over the years, who gets to edit and political bias going on.

Wikipedia is suffering from similar censorship issues as facebook, twitter, snoops and the others. I am not surprised to hear editing issues going on when the political stakes are raised.

Go ahead, source wikipedia foe your next paper and see what remarks and marks your professor gives you.

I do cite Wikipedia occasionally when I’m being lazy but t I can prove it with other sources if asked .

originally posted by: dubiousatworst
Wikipedia is a biased source of information. They are financially dependent on donations. With enough of a donation comes the power to control content on Wikipedia. There are actual paid teams of people who are "super editors".

There are a few people that formed a company (white hat wiki?) that were super editors that sold their services as a cleanup crew for any company who wanted to pay for it.

Liberals to boot... so wiki should be taken with a block of salt.

For instance, Mark Levin's book "Unfreedom of the Press" was a #1 best seller on the New York Times for 4 weeks.

Average Customer Review: 4.9 out of 5 stars 1,657 customer reviews on amazon.

If you go to the Wiki for Mark Levin, the only reviews posted about the book are a few negative ones by liberal writers.

No bias there though...

It helps expose the people which are hired to handle the corrupt sickos images.

The edit history you linked to, look at the users and who else they did edits for to manage their image.

This gives more information on who else we should be looking at as well....


I agree -- it is a great starting point. But you have to dig deeper than simply the Wikipedia write-up, especially the articles cited as sources -- they can be a gold mine of information! The references often include older articles, providing valuable background or historical information. At the very least, it can lead you on some very informative tangents.

Wikipedia is quite valuable when it's taken for what it's worth and treated accordingly.

I agree. Google, twitter, youtube, wiki, and all the rest, need to decide if they are platforms or publishers. If they edit or censor information, they are publishers and should accept the liability that comes with that.

Our government has given them immunity, and they have clearly abused it.

I wonder how many lawsuits have been valid and a judge would’ve ruled aginst Google, Facebook or Twitter but were settled before hand ?

I would be willing to bet there were quite a few .

A room full of lawyers will save your ass far more often than not .

posted on Jul, 9 2019 @ 08:32 AM
link
It's clear that many people protected Clinton through the years when it comes to this. It's clear that the media has done the bare minimum.

Sadly, I don't see justice prevailing in this situation.

Ironically the media is trying to implicate Trump, who was a business man in New York, where the millionaires routinely brush shoulders. I'm not saying Trump was innocent... But anyone without partisan blinders can say Bill obviously has more reason for scrutiny with his numerous recorded play dates.

I think it was removed because it wasn't relevant, and in itself wasn't evidence of anything.

Just because people rode on a businessman's plane doesn't make them all molesters.

Including those tidbits aren't relevant to what the page is about.. it's about Epstein, not the Clinton's.