Using claims of doxxing to shame a beaten journalist

But for those of you that don’t know, a journalist reporting in Antifa was beaten in Portland

This leads time to a very interesting question; how exactly do we define doxxing

First off Ngo to my knowledge did not give away personal phone numbers, addresses, places of work, etc. he just reported names of some Antifa people

How is one doxxing and horrible and the other a good thing?

Well the explanation I have received seems to be this: Antifa wears masks, so we have to respect their privacy. Right wing groups don’t, so it’s ok to name them

This is clearly hypocrisy

So just because a violent domestic terrorist group wears masks, it’s doxxing and horrible to put their names? Would the people saying this also say it would be doxxing to our kkk members at rallies in hoods?

The real reason this is being done is because the people on the left that are doing this, many main stream people, want to downplay what happened to Ngo by making him a villain

Imagine the outrage if some kkk guys beat up a reporter, and people’s response was “well he outed some kkk people so he was biased and a bad actor@

That’s what we see here

So I guess the point is this

And if you think so, you make want to check your bias

I think it’s much simpler than that.

posted on Jul, 2 2019 @ 03:25 PM
link
Up next they will be protecting terrorist identities. Oh wait, that's exactly what they're doing here.

ETA: Here is a link to 3 of the Antifa thugs unmasked.

Fox News
edit on 2-7-2019 by Middleoftheroad because: (no reason given)

originally posted by: Middleoftheroad
Up next they will be protecting terrorist identities. Oh wait, that's exactly what they're doing here.

I can’t believe the blatant hypocrisy

I report some of the identities of the hooded kkk

You then spend post after post showing pictures of the black panthers who don’t wear masks, and giving out their names

What chutzpah it takes for you to claim I am a bad person but you’re not, because the people you outed didn’t have masks

Any excuse to attack the victims of left wing violence though. Just like with the Covington kids

Antifa is the paramilitary wing of the democrat party and has the blessings of all the party leaders and libtards & there is nothing on this planet that will convince me otherwise.

I have lots of popcorn ready for the day they are met with flying bullets from those they are attacking.

originally posted by: face23785
a reply to: Grambler

No not at all

This is a group of people that claim to hate racism and attacking victims, that defended adult racists harassing kids, and smeared the kids all because they were seen as right wing

Now they claim to care about journalists who n danger, but when one is attacked, the smear him and make excuses for it 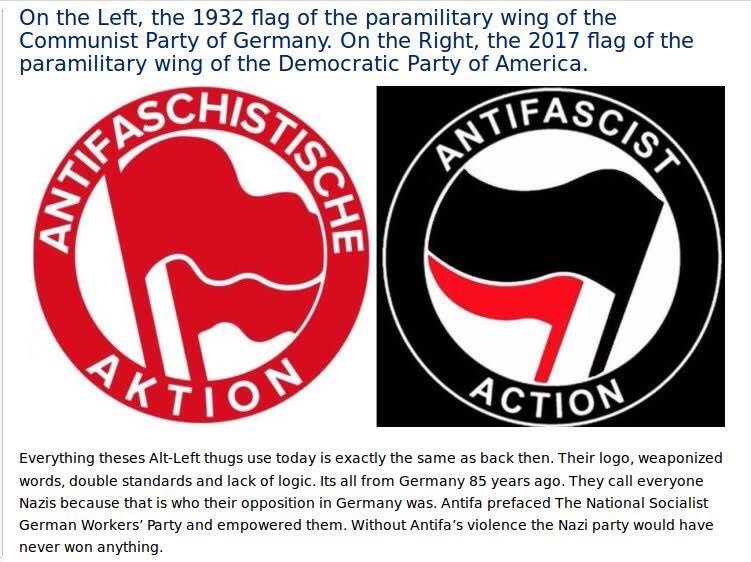 Exactly, either they pass the unmasking law that's been thrown around or label Antifa a domestic terrorist group. If not, eventually people will handle this in their own way, which won't be good for anyone.

Hmm, makes you think some Nazi sympathizer is the one funding this group. Ever notice how they are all white males and females in Antifa? I'm yet to see a person of color in that group.
edit on 2-7-2019 by Middleoftheroad because: typo

Seems they're not incognito enough, if the ability to be recognized is the parameter?

posted on Jul, 2 2019 @ 04:09 PM
link
This is the "Thief Paradox". On one hand people feel that a starving mother with kids stealing a loaf of bread is ok, but a person needing to get out of town stealing a car isn't. It's theft either way, but because they can sympathize with the plight of the mother, they deem it an acceptable action. Let's change the bases with words:

A morbidly obese woman with six children is caught steeling a loaf of raisin bread. Is that still acceptable? What if the guy stealing the car was in need of getting to a hospital in a hurry? Is that now ok?

This false concept of "Doxxing" is the same thing in peoples minds. If a person disapproves of a group then they feel that they are doing the job of justice by exposing the people that are doing the action, while a person that agrees with the action will view the exposure as criminal in the revealing of the preparators.

The reality is just as you hinted at, though Draconian in nature, criminal either way. If a person wishes to complain about the revealing of their masked vigilantly of the week, then they should be just as irate over the exposing of the unknown target of the vigilante.

Though the term "Doxxing" is getting over used in the media and by the blinded masses of the media. If peoples addresses and contact information isn't getting released with their names, then how is it "Doxxing". People today will be complaining that the Big Mac got "Doxxed" by it's jiggle next. I wish people would understand the words they use better. Without an agreed rules for speaking, how do we have a society?

With all of my discussing of politics on here my YouTube channel and elsewhere, I have realized the following

I can respect and get along with even people that disagree with me, no problem. The hard part is with hypocrites and people with double standards

I believe discussing the names of violent thugs is ok (not giving out adreesses or things). Them wearing a mask or not, or being in any particular side doesn’t matter to me

However, if you think that discussing their names is wrong in all incidents, I disagree but I respect that

But to the hypocrites that say we can release the names of one side and it’s fine, but discussing names on the other side is horrible and you should expect to be beaten if you do, that is ridiculous

posted on Jul, 2 2019 @ 05:54 PM
link
“Just because a violent group wears masks and beats people doesn’t mean that it’s unethical to name them “


I think it’s wrong in any case. Give out the wrong address and right name, someone goes to the wrong house and harasses or worse, the wrong person/family.

Another person with the doxxed name could be accidentally targeted and harmed.

Giving out people’s names, addresses, etc - should be completely and totally illegal, because of the harm likely to happen.
The only reason this doxxing is going on, is specifically to cause grief and/or harm.

Before I wore the cloak of anonymity I wrote online using my own name for a few different sites.

I was shocked at the level of death threats I received even back in 2005.

But made a few interesting friends along the way as well. My point is, if you’re going to do something in the public sphere, there’s always the chance you’ll get exposed.

We are talking about people engaged in crimes in violent gangs


Which was especially egregious considering Zimmerman was the victim in that case.

I would say when one group becomes violent naming them becomes a duty. Antifa is as violent as they come.

Or to get police to take action, since the police know who some of these people are and yet refuse to arrest them.