originally posted by: Skid Mark
a reply to: Nyiah


Exactly! Right down to the crying and kicking on the ground, amirite, Zazz?

posted on Oct, 20 2019 @ 01:57 PM
link
First, the cute & cuddly picture for anyone in need of a pick-me-up -- the cat and rabbit cuddling on the couch! We had gone out and left the rabbit out, since he really doesn't get into anything and behaves himself. Normally, we find him sprawled out behind the recliner (his favorite spot) This time, he was hunkered on the couch with the cat, they were curled up, nuzzling heads when we walked in. 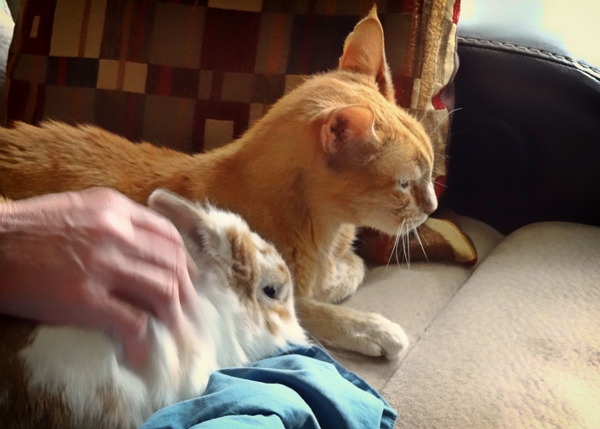 New substrate, sand! This is a HUGE improvement over the gravel they came with. I may have a few pounds of sand too many in here, but I think mixing it with a chopstick every other day should take care of any potential issues with air pockets in too-deep sand (if decaying matter gets into a large enough one and sits undisturbed long enough, it can create a toxic anaerobic bubble) 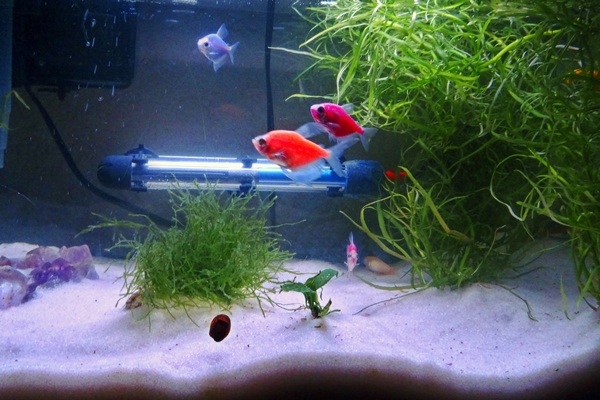 This is the Tiger Nerite, he's pretty vivid in color. He's not usually out where you can see him (likes to hide under the plastic rim of the tank up top) so unless I futz with him and handle him, this is the best I can do for the moment.
The younger kid initially named him Sorbet, but that's fallen out of favor. He's Joe now. 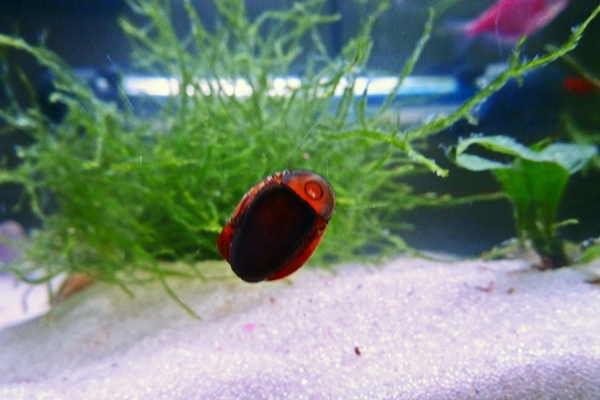 This is the Zebra Nerite. He's always on the move, but was in a darker corner by the filter, so his glamor shot isn't too spiffy.
The younger kid had initially named him Sunny, short for Sunflower, because his stripes resemble a sunflower seed. But the older kid was having none of that and renamed him Ziggy. 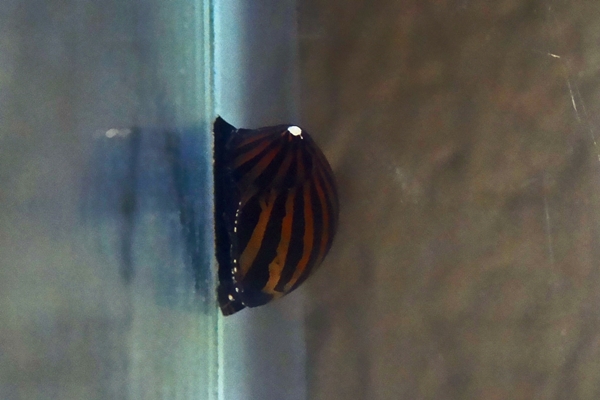 A side view of the tank looking across it from the more "wide open" end, toward the "grove" side with all the octo grass. The white specs around the java moss stone is air bubbles from the filter waterfall, and the bubbles on the heater on on the outside, not the inside! 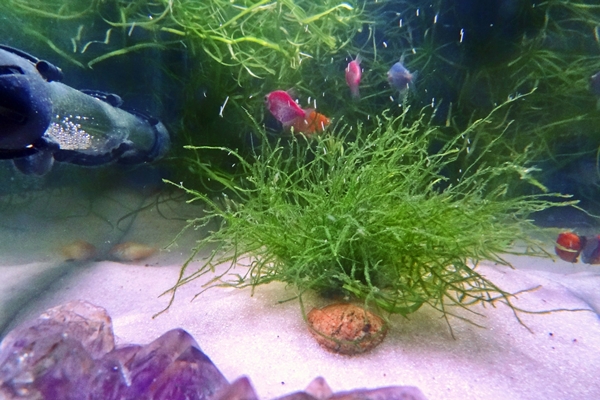 The grove/octo grass end of the tank, that plant had thus far allowed me to make two more clusters from the trimmings! I have about 5 trimmed stalks per cluster so it's not too dense. 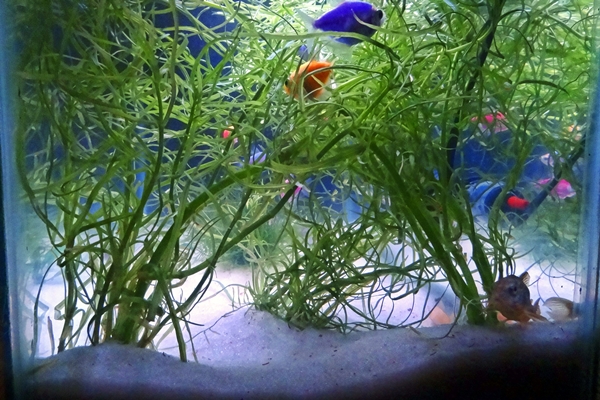 The same view with the old gravel substrate, see how much of a massive difference there is? It even reflects significantly more light! 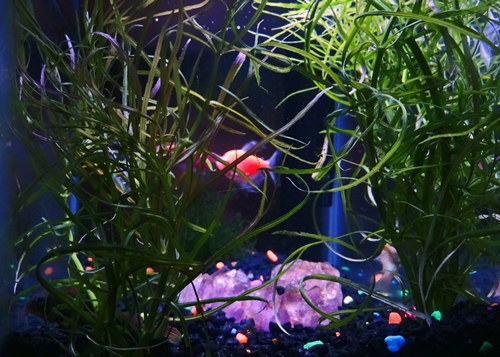 Kitty is one very happy catfish. His favorite spot to hide is not only denser, but comfortable on his belly now. 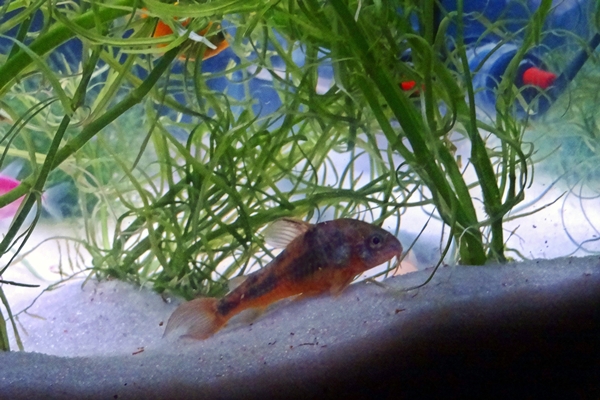 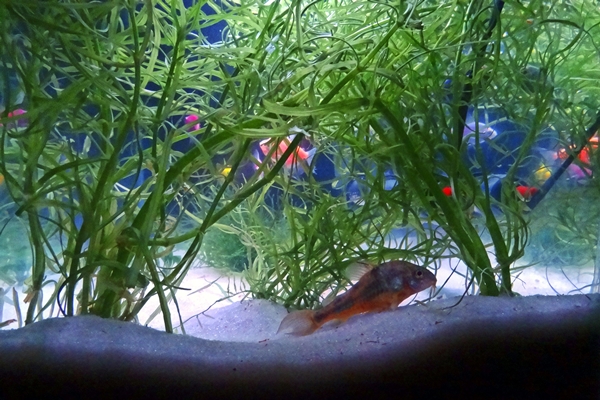 An attempt at an angled view from the front, of their hidey-hole back there. You can see Kitty's hind end, and next to the plant next to the snail, you can see Casper, who's a bit harder to spot now, but that's ok. He's happy!

Speaking of that little plant, I'm now pretty sure it's not Amazon Sword, but a Java Fern. Either way, it's fine, I didn't have to pay for it, it was a hitchhiker seedling hiding in the moss! 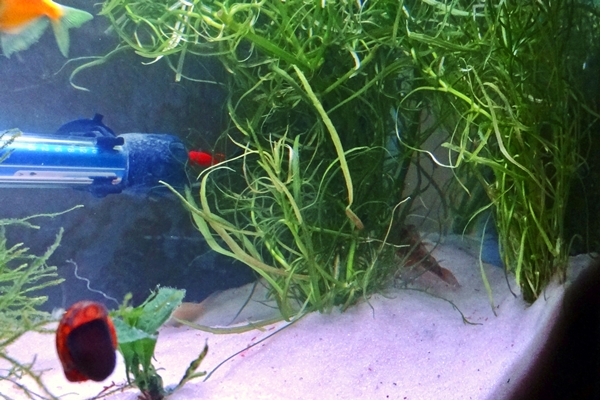 I'd love to comment on your photos but ATS doesn't serve me photos anymore. So let's talk about chocolate. It's healthy and tasty and a vegetable to boot. I bought 750 grams on Friday, there's only around 150 grams left now. (It was on special and being the health-conscious person I am, I had to.) (1000 grams = 2.2 lbs)

I also have 200 grams each of milk and pure choccy for (multiple batches of) brownies, one of which is in the oven now. I considered nuts but thought they might detract from the chocolate. I will have to try those too at some point though, obviously. I'm trying to find the sweet spot on my oven. I haven't quite hit the "goo" point yet. (They are slowly coming out less cakey though.) For me it is the iconic American sweet and something to be revered if not worshipped, preferably daily. It goes down a treat after a nice bowl of chilli too, another American classic. I doubled the peppers and now you know you are eating something spicy. (From a previous conversation, yes the Suriname reds/yellows.)

Speaking of which, it's time for dinner, chilli and brownies!

WOW! Nyiah those pics are awesome! Good job on the tank set up!

posted on Oct, 20 2019 @ 05:38 PM
link
Hello my Loves! I have been busy taking things out of all the cupboards, moving lots of plant stands, plants and stuff as Mark and his Brother will be painting tomorrow. My back is so sore I had to stop. They may have to help me. I can't do everything. I am so grateful to his Brother for helping us. It has been a year and I have been sitting in these rooms with them half torn apart from removed paneling, bare walls with holes and cracks filled etc. They still have a lot to do.

I have been taking on extra duties for quite sometime since Mark's health started going haywire. Sometimes I can barely take care of myself. It's tough, but ya gotta do what ya gotta do, eh?

It was great to see Miss Zazzy join us today! Hello beautiful lady!

Skiddy I hate you too for not having to worry about your weight. Kidding. I'm jealous as hell though.

Why can't you see the photos Light??? So you can't see avatars or anything? Man!

posted on Oct, 20 2019 @ 08:17 PM
link
I finally went out to the pharmacy to get my back patches. Afterwards I went grocery shopping with 5 million other people in the store. Overall it was a challenge but I'm too tired (and enjoying the patch) to add more tonight.

originally posted by: bally001
Sounds like you're gonna have a fine day Fin.

Wow LOL! you even got the "a with dots" spot on! (he said "enjoy the moments" to me)

Yes the Saturday was excellent! I went to my friend's place and his daughter was there, with her tiger trousers! Stripes and tiger faces! Then she also wanted a tail, she has many there. Fake fur, in different colors. So suddenly the little girl was gone but there was three cats

She said she is going to be a human for the time she eats, because otherwise she could only eat the little sausages and not at all french fries! Unacceptable!

Yes, she was a little bit taller than last time i saw her. In preschool now. Many new friends there. She had learned one-two-three in understandable English, not the perfect pronunciation but you would have totally undestood that. And she had learned the "happy birthday song" in English. And was very good jumping with one foot only! The other foot was in the air all the time!

I had to google this word but we have these things called "star rain stick" and google only said it is a "sparkler" so when her dad went outside to have a cigarette, i said to her, check this out! I turned off the lights, used my lighter to spark one up, with a good safety distance from her but in her view. She was all like WOOOOOOOOW!

It is so easy to please her. I wish i was like that

Night Star asked if we are going to have a tea party? Well the kid had apple juice and adults had coffee. But very soon she is six years old, i was thinking of a really cool party. Cake, coca-cola, potato chips, kid music, cartoons, the whole deal that day!

At one point she gave me a tiny police car and i had to be the police. Then a plastic ant came to cause some serious mischief. The ant bit a toy dinosaur, even when the dinosaur was taking everything really easy, sleeping actually. The plastic ant was sentenced to six minutes of jail time inside a batman briefcase.

Thanks! It has been raining for about two weeks in a row here and i kind of needed that picture! I don't mind about the rain but still, that brought light to this day also!

The colors of that rabbit are so awesome. I have said it before and i say it again. Cat looks calm and clever!

Well. You did have fun. Sounds like a splendid day. Good on you.

Yeah Saturday was super day with the little lady. Sunday i washed all my clothes, washed all my bed linen, and after that, i 100% ran out of energy.

Monday now. Beer. Asking you to virtually rock with me. I refuse to dance, and you don't have to either. But my beers are free to use for everyone who asks (unless a pixie asks, those things drop my blanket away from on top of me when i sleep if they have drank anything except pixie water)

I'll dance with you Fin.

I cracked up reading about your friends daughter. She sounds like such a delight and funny as hell.

Have a beautiful day/night everyone! 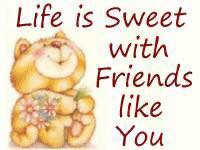 originally posted by: Finspiracy
Okay i am going to step out of character right now


If I dress up in my mankini with fairy wings and dingle balls can I have a dance with you.

Haha! Well timed post. I crawled out from my bed with a slight headache to have a cigarette and saw this.

You are a good person too! Let's dance, but not now. In the morning. I will just have a few glasses of water now and try to go back to sleep world.

posted on Oct, 21 2019 @ 08:03 PM
link
The lower back MRI shows that I have a pinched nerve between L4-L5. Now I wait to find out if my insurance will cover an orthopedic surgeon or not. Insurance is supposedly looking into finding me someplace I can go for an actually MRI of my brain as the last place didn't know what they were doing.

This made me laugh...


I see. My friend also has pinched nerve in the back. Hard to watch him sometimes. I see he is hurting but he never complains about anything. He is working half workdays now.

I have been in a couple of brain scans too. Before they drilled my skull. I guess the scans were alright, i asked "did you find anything unusual?" -no. "Did you find brains" -yes