Figured that out using prophecy and the day counts.......coupled with the Pope being 80 years old.....who will be our false profit that gets tossed in the lake alive.......

I target him since he calls for a one world religion....see my point!....ok, all agree then he's the false profit that helps the Satan indwellled anti christ.....you know....Obama

So we are seconds away from ww3 and the gog magog war that goes early.....since Scripture says they will burn the leftover weapons for 7 years from that gog magog war.....did ya know.....

Not enough of us are aware of the world being so close to a brink. They're busy with the worldly way

The events in and around Israel are getting more frequent,like birth pains.....like never seen before, am I right....

So Iran has to make a move before the U S does.....or the reset of Iran's nuke capabilty would be gone......other infrastructure, too 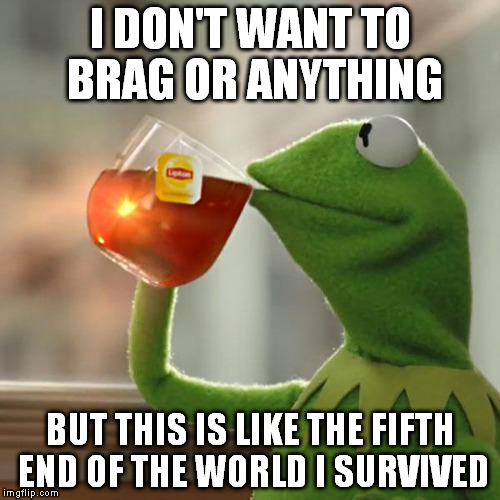 With the current sanctions regime in place Iran is effectively under siege , I doubt they will launch a direct attack on Nuclear armed Israel and its big bad dog as they are very much the underdog , Iran is likely banking on Trump not using the military option.

We're here, but the numbers are few. During the Tribulation more people will find salvation than any who have before.

We must keep our eye on Israel. Biblical prophecy is coming true faster and faster. The noise of the non believers is growing louder, the scoffing, as foretold in the Bible. "2 Timothy 3 New International Version (NIV)
3 But mark this: There will be terrible times in the last days. 2 People will be lovers of themselves, lovers of money, boastful, proud, abusive, disobedient to their parents, ungrateful, unholy, 3 without love, unforgiving, slanderous, without self-control, brutal, not lovers of the good, 4 treacherous, rash, conceited, lovers of pleasure rather than lovers of God— 5 having a form of godliness but denying its power. Have nothing to do with such people."

posted on Jun, 29 2019 @ 04:11 PM
link
The "Israel" of the Bible and the modern nation-state of "Israel" are not the same thing. A bunch of corrupt, racist politicians got together, got a UN charter and decided to call their new country "Israel".

True! However we can know the season. Jesus told us to watch for signs and so that's what we do. He didn't know the day or hour either but he did tell us to watch, and to watch the signs in the heavens and read the Bible so we would have the best idea of the Rapture, and the coming end.

The nation of Israel and why we are to keep our eyes on it:

Although July 15, 537 B.C. can not be verified by outside sources as the exact day of Cyrus's proclamation, we do know that 537 B.C. was the year in which he made it. As such, we can know for certain that the Bible, in one of the most remarkable prophecies in history, accurately foresaw the year of Israel's restoration as an independent nation some two thousand five hundred years before the event occurred.

Also, when the Tribulation occurs the Jewish people will flee to Petra and God will protect them there. They are right beside Petra, which wouldn't be possible if it meant Israel as a bunch of scattered people/organizations all over the world.

That means a ground war is coming and the armies fight across the euphraties right?

I've recently realized that you can read Revelation and that you can apply it to the Jewish wars leading up to the destruction of Jerusalem and the temple in 70AD. Everything described fits over the events of that time period perfectly.

I'm not full preterist, or maybe not even partial preterist as the eschatology subject is one big giant QUAGMIRE, but have a look at Revelation with an eye towards the events in Judea/Jerusalem from after Jesus's death up to AD 70. Even all of the leaders fit.

originally posted by: Woodcarver
a reply to: KansasGirl

Thank you for the congratulations. And I agree with you that anyone can twist anything into what they want it to be. But there is a zone of reasonableness where most people will agree makes logical sense and will also agree when logical sense is getting tossed out the window. With the bible and particularly with the book of Revelation, people usually get very emotional and attached to the view they hold on its meaning. Some of the most contentious arguments within Christianity, in which Christians behave absolutely abominably towards one another, occur around eschatology.

Are you familiar with the Jewish revolts and wars in and around Jerusalem and Judea that happened from around 20AD to 70AD? I'm not talking about biblical text, I'm referring to actual and recorded history. If you are, I wonder if you would take a look at Revelation and see if you think those events could be what is being described in the book.

I know that you don't believe in the bible, so it wouldn't be for any faith purposes, but rather Id be interested to see if a non-believer could objectively pair up the text with that period of history. Again- I know you don't think there is any truth in the bible so that's not why I would be interested in your opinion.

On another note: you seem especially angry and bitter recently. Is anything going on with you that we could help with? 😰

GBP love, I've been trying to post a YouTube video and it's not happening. I'm not even able to get a link to it posted.

If you're interested, go to YouTube and search "Bruce Gore historical context of Revelation" and you'll get a series on Revelation he did called "The Apocalypse in Space and Time." It's fantastic; he gives the historical background of what what happening in the first century between Rome and the Jews, and between the Jews themselves. Then he goes through the book and correlates it with what happened during that time, culminating with the destruction of Jerusalem and the temple in AD 70. Even if you don't buy it, the first video of the series is extremely helpful with his historical breakdown of the time. He's also very entertaining and easy to listen to. Interested in your thoughts, if you feel inclined to give it a listen. 😊

originally posted by: GBP/JPY
a reply to: KansasGirl

I see you have your mind closed to any other idea regarding this...carry on then.

LOL the "Rapture" was a recent addition, less than 200 years old, mainly espoused to a gullible American populace.

You know whats really funny; pro-westerners say stuff like " Islam justifies hatred of the west and uses brainwashing to create terrorists " for furthering their political and monetary goals.

And yet we have millenialists in the US calling for the rebuilding of the Temple by Israel on the dome of the rock, and setting off a powder keg. Brainwashing at its finest

Self fulfilling prophecies and behind the scenes maneuvering to create a script.

And then there is this - Oh dear....so confusing.

Premillennialism is based upon a literal interpretation of Revelation 20:1–6 in the New Testament, which describes Jesus' reign in a period of a thousand years. ... Premillenialism is distinct from the other views such as postmillennialism which views the millennial rule as occurring before the second coming.