HILLARY CLINTON IS in Ireland today on a visit to children’s charity Barretstown.

The former US Secretary of State and First Lady is not understood to be holding any formal meetings during her visit, which is taking place in a private capacity. The charity provides a residential activity camp at Barretstown Castle, Co Kildare as well as hospital outreach to children with cancer and other serious illnesses.

Clinton is guest of honour at a founders dinner being held to mark the 25th anniversary of Barretstown being founded.

Barretstown was founded by the late Hollywood actor Paul Newman as part of his SeriousFun Children’s Network and Clinton is a long-standing supporter of Newman’s philanthropic work.

“Paul Newman just saw children who he thought deserved to have joy in their lives even though they were seriously ill,” Clinton said today. Bill and I visited that first camp in Connecticut all those years ago and were just so overwhelmed by how joyous it was with

all of these kids

feeling like they were able to have the fun that you would have at a camp.

During her visit, Clinton meet members of the Barretstown team and some of the campers who were taking part in various activities.

President Michael D Higgins, Sabina Higgins and Health Minister Simon Harris will also be attending today’s dinner. Sabina Higgins has been a patron of Barretstown for the past five years.

Clinton is understood to have arrived in Ireland earlier today but there was no media event as part of her schedule.

If it wasn't for the failures , the neglects and the oversights of governments and their spending programmes , you wouldn't need charities .

You wouldn't need , for example , people guilt tripping you to pay charity donations for children's hospices . So that children can go for palliative care in a suitable environment .

Why do they overlook paying for children's hospice care . It makes some people very suspicious indeed . Now we have private individuals and members of society whose honour cannot be tarnished for the important charitable contributions they make , running institutions such as these .
Children go to die there , and we let people who we have no legal or state control over deliver such a service in private settings ? Why are we , do we allow such a grey area here ? Do dead children , ever get to complain again ?

HRClinton isn't in the democrats presidential race . She's apparently in Ireland (safe there in the EU is it ?)

visiting kids without inviting the press

So she's grocery shopping in the ethic food aisle.

originally posted by: FieldMarshalMatt
If it wasn't for the failures , the neglects and the oversights of governments and their spending programmes , you wouldn't need charities .

Because of the consistent failures, neglects and oversights of government you need charities.

I would much prefer to voluntarily continue to give to the charities of my choice than involuntarily donate my tax money to our inept, inefficient and dangerous government. 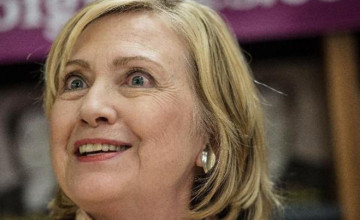 By taking that view you open door for toothless charities regulators to allow serious malpractice to occur in private settings eg Oxfam / Haiti case , without allowing anyone's potentially necessary recourse to justice . Do you think it's ok for governments to just ignore the needs of dying children ? To just leave them to unregulated charities to care for in the hope that enough of the public are concerned to pay for it ? In the UK for example government pays for general healthcare , but not children's hospices . Why is this the case ?

originally posted by: FieldMarshalMatt
Do you think it's ok for governments to just ignore the needs of dying children ?

To just leave them to unregulated charities to care for in the hope that enough of the public are concerned to pay for it ?

Poorly regulated. I went through the most popular charities on charity navigator last year to amuse myself. Its a complete joke.


Based on the track record of the Clinton foundation, she's there to ensure their staff sends a steady stream of children into the human trafficking trade.
Pretty sure the Simpson's summed it up in one of their Halloween episodes- go to detention? Go to the grinder!
Something something, the old eat the young if you let them...!

"The blood of Irish children has the ability to extend your life."
-Abraham Lincoln

Unproven but if true they obviously deserve putting down, unequivocally.

But what's the point of the thread?
That charities exist?
That Hilary Clinton has gone to visit a charity she supports?

You wouldn't say, "Awww, Hitler is petting a dog, he's a dog person so he can't be all THAT bad!"

She is the Vile Blood Queen of Vomit.

originally posted by: drewlander
Poorly regulated. I went through the most popular charities on charity navigator last year to amuse myself. Its a complete joke.

I'd rather have the most poorly regulated charity take care of me than the government.

This whole thread is Erie.

posted on Jun, 26 2019 @ 09:40 PM
link
She doesn’t want to be anywhere near the USA while these democrat debates are on. Imagine being tarnished with that sh*t-covered brush

Thanks dEms, you’ve just improved the country for another term by bowing out of the race


Since when does she care about anyone/anything except herself.

This is no more than a lame attempt at sympathy foundation laying whilst she can before getting dragged through the courts for unspeakable crimes against humanity, - "but your honour i visited children's charities" i can hear her beg.

The only thing she supports is manipulation.

Perhaps she will stay.
Maybe a leprechaun will kidnap her.

posted on Jun, 27 2019 @ 06:24 AM
link
Prediction - when those kids are adults they are going to level ‘allegations’ of severe abuse against a dead Hilldawg.
Don’t eat the cheese pizza, it’s Hillary’s.