Although both pilots managed to eject from the planes, local reports said one of them had died.

One of the Eurofighters went down in a forest while the other crashed near a village about 10km (6 miles) away, the interior ministry in the state of Mecklenburg-Western Pomerania said.

The pilot who survived was found dangling from a tree by rescue teams.

The mid-air collision happened as three Eurofighter Typhoons were taking part in an air combat exercise shortly after 14:00 (12:00 GMT). The third pilot witnessed the collision over the Fleesensee and reported seeing two parachutes.

In this day and age, it's pretty bizarre for things like this to occur, especially in first world nations with top rate armed forces and air forces and skilled personnel. Although, this did occur during a "combat exercise", you'd think in a nation like Germany that such pilots would be skilled and trained. Mistakes do happen, but still...

This last bit is especially eye-opening:

Germany's military has some 140 Eurofighter Typhoons but has struggled to keep them ready for combat. A report last year said only four of its planes were available because of a leak of cooling fluid in the wing sensors.

This whole debacle is all a bit embarrassing to Germany and Europe as a whole.

posted on Jun, 24 2019 @ 10:56 AM
link
Hopefully Merkel assigns a top notch cultural investigator to see if this event has hurt any homosexual or muslim people.

posted on Jun, 24 2019 @ 11:04 AM
link
There are already two threads about it. And for me it is more about the pilot that died, not a game who has the better military.

originally posted by: Oleandra88
There are already two threads about it. And for me it is more about the pilot that died, not a game who has the better military.

Germany has always been great with planes post WW2 lol. They at one point had a habit of over spec'ing planes, like the starfighter (aka "The Widowmaker"). This tends to cause mechanical problems as well as pilot error. Of course, it could have simply been a dyslexic pilot, during an exercise bank starboard (right) during a head-on, maybe he banked left?

For your listening pleasure, a story album, Captain Lockheed and the Star fighters. It has Robert Calvert, Eric wolfson, hawkwind, Arthur Brown and I think Alan parsons. I have an original pressing from the master mother imported from United artists in Europe :-) It is a story of pride, greed and bad engineering, demanding too many features and functions from an aircraft manufacturer.

No, it really isn't unheard of. As pilot training hours drop, and aircraft readiness rates plunge, it's really not that uncommon at all. It doesn't matter who the aircraft belong to.

The German military is a shell of what it was. Their readiness rates are even worse than some of ours.

It isn't bizarre at all! Regardless of the nation these collisions do happen.

The bizarre thing is people giving you stars for the post! 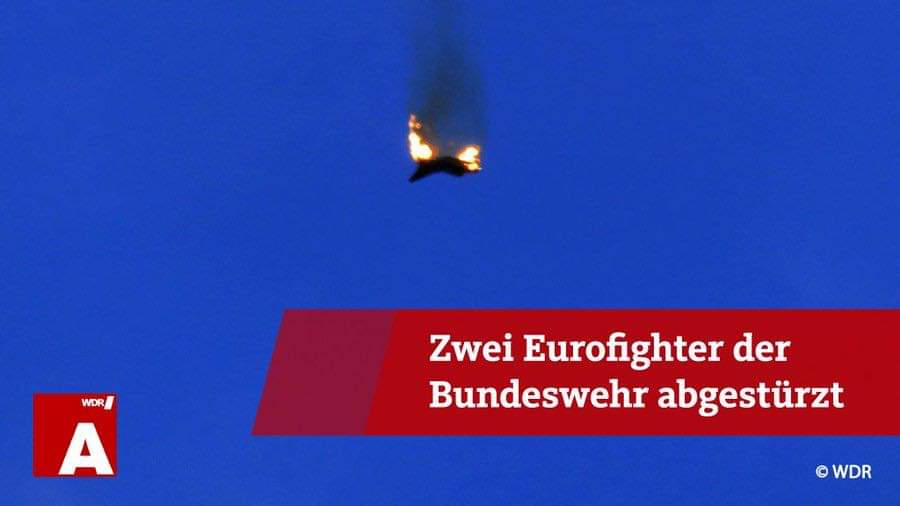 That's saying something though, isn't it?

There has been no "impetus" to increase aircraft readiness and pilot preparedness and training...

There's been a big attempt to improve both, but it takes money and time. Readiness isn't improved quickly, either on the crew side or the maintenance side.

Due to a technical problem with the defense system of the combat aircraft only 10 of the Luftwaffe's 128 Eurofighters are mission ready, according to the report.

In a Bundeswehr document provided to the German parliament last year, the military classified 39 of 128 jets as combat ready.


However, Der Spiegel said that the military appeared to count any Eurofighter that can fly as ready, even if they are only available for training or maneuvers without missiles or defense systems.