NOPE... You are wrong again. Obama is still known as the "POTUS whom has deported the most illegal immigrants."

Obama Has Deported More People Than Any Other President

Why Trump Deports Fewer Immigrants Than Obama
Sanctuary states and cities are slowing the expulsions.

When Obama was deporting entire families the left did not stop him AT ALL, not even you posted one thread or post demanding Obama stop this "inhumane treatment of illegals..."

Whom Obama and his administration "caught and released" were VIOLENT illegal immigrants.

I made a thread about this some years back with links to the documents proving Obama was releasing VIOLENT illegal immigrants meanwhile deporting regular illegals, who are still criminals.

This was in one year alone. In my threat I posted links to documents showing year by year how many of these illegal violent criminals was the Obama administration releasing.

The "catch and release" policy was used to allow any illegal, who would claim to be a student even thought they were adults, to stay in the U.S. illegally.

There were a couple of immigration officials who even testified to this and that Obama gave these orders.

By Jessica Vaughan, March 27, 2015
...
In 2013 (the most recent year available), ICE arrested significant numbers of gang members in California, Texas, Chicago, and the New York City and Washington, DC, metropolitan areas. Large concentrations also were arrested by ICE agents in Atlanta, Charlotte, and south Florida.
...
This recent record calls into question President Obama's claim that gang members are among the highest priorities for enforcement. The administration has been severely criticized for legalizing known illegal alien gang members in the controversial Deferred Action for Childhood Arrivals (DACA) program, including Emmanuel Jesus Rangel-Hernandez, who has been arrested in North Carolina for the murder of four people.
...
CIS obtained the ICE data through a Freedom of Information Act request as part of ongoing research on transnational gangs and ICE anti-gang enforcement programs. It shows that the most violent gang members arrested by ICE were disproportionately associated with the Central American gangs, including MS-13.
...

And what about criminal aliens, whose removal has supposedly so exhausted ICE resources that the government has nothing left for the arrest and removal of less dangerous illegal aliens? In fact, the FY2014 ICE statistics reveal that the number of criminal aliens removed from the interior has declined 39 percent since FY2011 and that nearly 167,000 convicted criminals who have been released by ICE are currently at large.52

Once again, the testimony of career officials belies the administration's propaganda. In his 2013 testimony to Congress, ICE officer Chris Crane explained that, contrary to the claim that "deferred action" was freeing up resources to focus on detaining criminals, DACA was being used to prevent ICE officers from inspecting and detaining jailed illegal aliens:


edit on 24-6-2019 by ElectricUniverse because: correct excerpt.

But, Obama isn't president anymore, Trump is. And Trump is the one whose administration told the court they didn't need to provide basic necessities to children their custody. It's Trump's administration that enacted the no tolerance policy that has detention centers over run with kids who have been separated from their parents. It's Trump who is willing to terrorize the migrant community and torture children, for political points, not Obama.

And, if you read my posts in this thread, you'd know that I said that Obama has still deported more than Trump, and he didn't have to torture or terrorize anyone for political points.

Unlike you with Trump, we do have real concerns for what Obama, and the left in general, have done. To this day Obama/Clinton/the left have been doing everything you can to label as "racists, bigots" etc Americans and legal residents, including minorities, whom support Trump. You have nothing but LIES about your beef with Trump. Obama was the real dictator wannabe. But of course you won't admit facts, meanwhile living in your fantasy world making up LIES about Trump.

BTW, keep making up LIES about what Trump has done. i have shown EVIDENCE corroborating my argument, you have presented NONE... Even the court who ruled against Obama agreed that Illegal children could be separated from their parents, and OBAMA WAS STILL SEPARATING CHILDREN. I showed a link to several photos taken in the detention centers in 2014 and children were by themselves without any parent or adult except staff members. Yet you keep lying because that's all you have.


edit on 24-6-2019 by ElectricUniverse because: add and correct comment.

The picture on the left, those people didn't live through it. They were murdered.

The picture on the right, those people are, to the best of our knowledge, alive. They weren't murdered.

But, you go right ahead and keep up your false equivalencies. 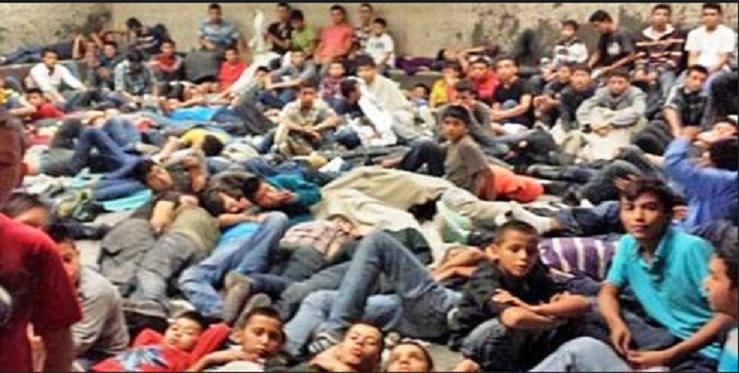 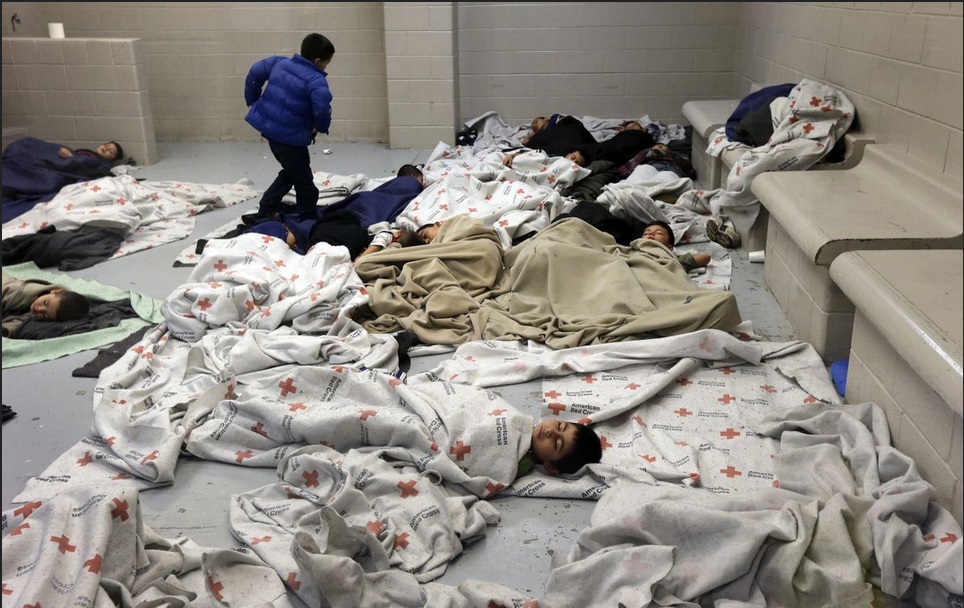 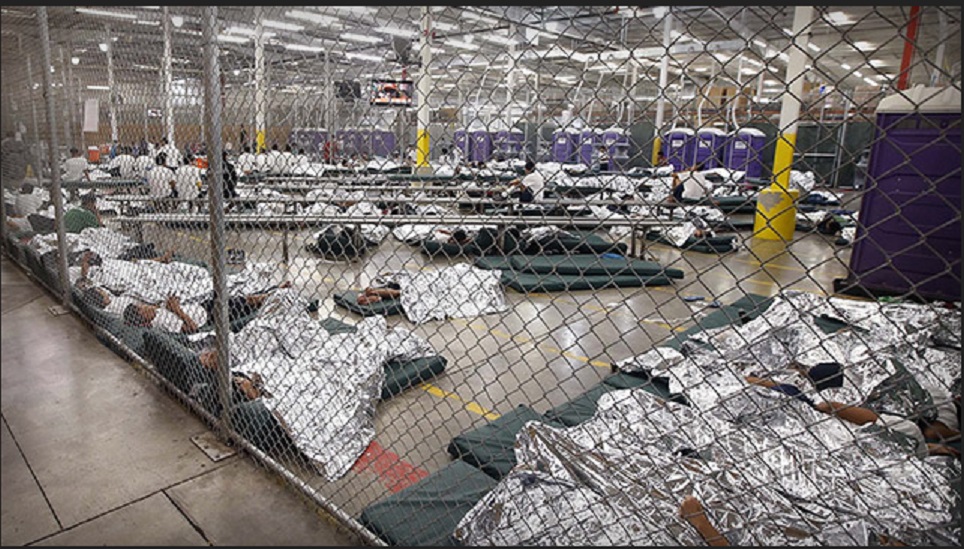 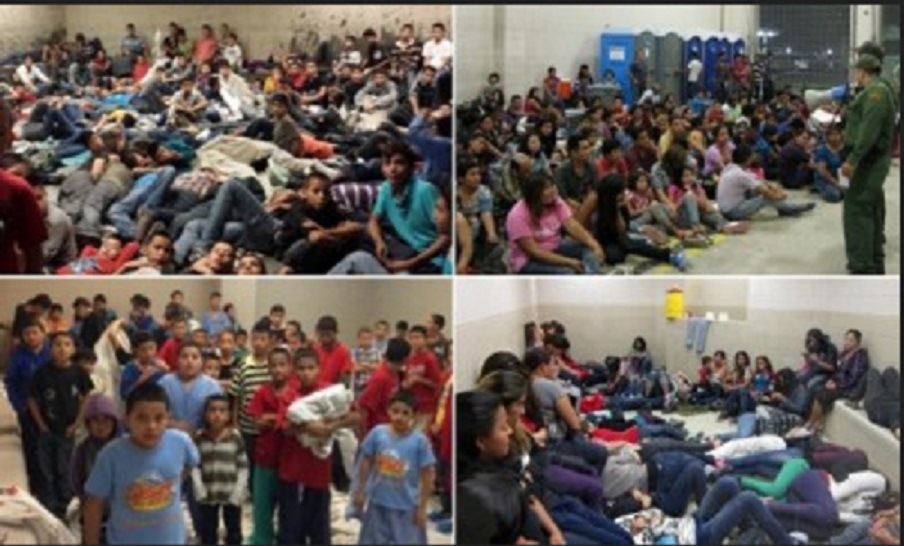 
Mexico's version of a Mobil-Transportable-Wall.

Paid for too and very effective 😎

Should the guards not have brown shirts on and Jackboots?

Your all back of the Bus these days America, God knows what the feck went wrong???

They're using these kids as pawns. They're purposefully creating these conditions so they can argue anyone else coming over the border shouldn't be detained since the centers are full and the conditions are bad. If you support this, you are scum and you don't actually care about these people. All you care about is your partisan agenda.

Desperate people, who risked their lives, trekked hundreds of miles through dangerous gang and cartel territories, looking for refuge and mercy, only to have their children ripped from their arms and then both children and parents caged and treated worse than animals, as a planned deterrent to dissuade people like them.

Thousands of them will never be reunited, because their parents have been deported and/or the Trump administration neglected to keep records and lost them, some because their children died in federal custody.

But hey, at least we're not sending them to gas chambers!

originally posted by: Sookiechacha
Asylum seekers are fleeing their homes and running for their lives.

You know what I don't see in any of those pictures of the unaccompanied minors that the Obama Administration had to deal with? I don't see any pictures of babies and toddlers who have been forcefully taken from their parents, as a cruel and public punishment for daring to enter our country seeking asylum, sobbing, drinking from bottles that haven't been washed for days, sitting in dirty diapers, crusted in snot and tears, hungry, cold, sick, terrified and neglected.


So... shouold American living in inner cities be able to claim asylum in Canada because the inner cities are overrun by gangs?

Sorry, those two conditions don't meet the requirements for Asylum.

originally posted by: scraedtosleep
a reply to: tanstaafl

"Are you advocating just as strongly for American kids living their lives in the same conditions in the big city Ghettos in America?"

If true, then good on ya mate.

Now... can you see a difference between helping American kids in need, and the rest of the world?

Sadly, we simply do not have the resources to help everyone.

I help people when I can, but have learned the hard way that most people who claim to need help, don't, they're just parasites living off the charity and good will of others - like the 'bum' begging for bucks at the street corner, who, at the end of his day, walks to the parking lot and gets in his 2 year old Mercedes and drives home to his paid for house.

The loved ones they long for are among the thirty-seven thousand currently classified as missing in Mexico. Most are presumed dead. Many of the missing are likely among the quarter of a million to have been murdered or disappeared since 2006, according to the Wall Street Journal.


On November 19, the bodies of sisters Maria Jose and Sofia Alvarado were found dumped in a grave outside the provincial town of Santa Barbara in western Honduras. In a country that has the highest murder rate in the world – in 2012, it registered 90.4 murders per 100 000 population, more than twice that of neighbouring El Salvador and Guatemala – most victims are poor and nameless.


More Salvadorans have been killed since the end of the country’s 12-year civil war in 1992, than during the entire conflict which killed an estimated 75,000 people

The Northern Triangle is one of the world’s most violent areas, with drug trafficking, gangs and other actors of organized crime fueling a high regional murder rate. In 2015, a total of 17,422 murders were committed across the Northern Triangle countries. The region is home to around 31 million people, but the violence has been causing a mass exodus of Central Americans trying to illegally enter the United States every year.

originally posted by: scraedtosleep
So what are the majority in your opinion?

"What I and the people I've spoken to are concerned about is the threat posed to the fabric of our society"
That's called fear.


Do you not understand the difference between concern and fear?

originally posted by: vonclod
When you put someone into federal custody, you(figuratively) are responsible for their care, they become a ward of the state..understand?


Leave out the ad hominems, and yeah, they don't qualify for Asylum under international law.

Sorry, but we simply don't have the resources to care for the worlds poor.

originally posted by: Sookiechacha
The Northern Triangle is one of the world’s most violent areas, with drug trafficking, gangs and other actors of organized crime fueling a high regional murder rate. In 2015, a total of 17,422 murders were committed across the Northern Triangle countries. The region is home to around 31 million people, but the violence has been causing a mass exodus of Central Americans trying to illegally enter the United States every year.