Asylum is approved for people in dangerous situations back home, usually war.

To get permanent asylum you have to go before a judge.

Before you go before a judge you have to apply for asylum .

originally posted by: Krakatoa
how did he put food on the table (or even have a table) by working without a valid social security card or ID?


There is no federal law requiring anyone to have or use a SSN in order to work in the USA.

Doesn't mean it is easy to do, but it is true.

What law are you referring to that would take children away from migrant parents?

Don't play dumb. Holocaust just means great destruction by fire. Imagine last year, as the fires were raging through california, if we all started blaming the dems by saying "the democrats have perpetrated a holocaust on california!"

Yeah, we all get that a technical definition could be used to excuse this garbage, but it's intellectually dishonest. Holocaust and concentration camps conjure up these awful images. That was the purpose of the reference, any argument to the contrary is just partisanship on display. It's obvious what she meant, otherwise the moronic person who offered the comparison wouldn't have said "never again."

In no way are our border facilities similar to a concentration camp. I mean, unless you also consider our school system concentration camps. It's disingenuous and absurd that anyone is defending that comparison.

Furthermore, human trafficking on the border is getting outrageous. You're arguing to keep these kids with their traffickers. Truly sick.
edit on 24-6-2019 by Dfairlite because: (no reason given)

He doesn't have a congressman. He's not from the US.

No , the left control the house. The right controls the senate.


And the House controls the purse strings.

No. The "optimal" solution would be to close off the border to illegals, and send those already here home.

That second task is a bit harder to actually do, than it is to say, of course... What with some city govt in open defiance to ICE, and the sheer numbers of illegals living here in the US.
edit on 6/24/2019 by seagull because: (no reason given) 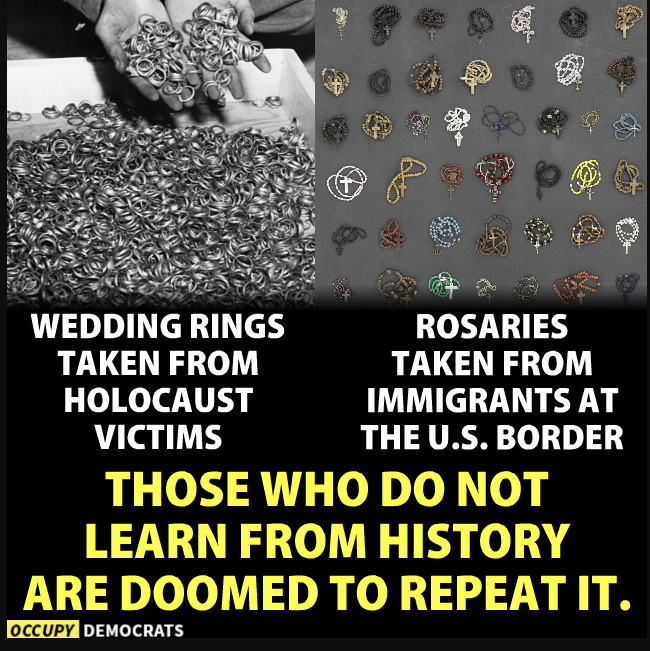 
originally posted by: Sookiechacha
a reply to: Krakatoa

Asylum seekers are fleeing their homes and running for their lives.

posted on Jun, 24 2019 @ 12:23 PM
link
I used to have compUserv back in the 90's, had Geocites after that, they both went away, so Facebook and google and twitter came along and I found no reason to sign up.

when you commit a crime, and involve your minor children, the state has the right to make corrective action.

(it's not my rule) until a person is 100 miles passed the border, they get no Constitutional protections ( again I did not make this law) asking for asylum at the border has no legal standing, it may be "allowed" but legally, it has no standing.

I accidently never had any children, becuase I accidently saw where the contry was headed many years ago ( I grew up during watergate, it made an impact on me ) I feel bad for the FEW that truly are in a bad way, but the few cannot over rule the many, only the one.

People on here have said borders have no place in the modern world, I do wonder if these are the same folks that want to do away with the electorial college, and desire a one world democracy.

if this applies to you, I do so hope you desire to learn Hindi, the language of India, because India is looking to surpass China in population, and if each person on the planet only gets one vote, India will rule, they have the MOST VOTES.

Have any of you been to India, it's awesome, Truly it's gorgeous, there is quite a stench, and the poor is rampent, as is disease. The ancient artwork is unmatched, the philosophy is unparralled, as is it's rich history. I still would not like to live as they do.

I have no ill will towards anyone, to each his own, if you wish to invest your efforts to saving the world, I have no issue with it, Don't ask me to help. I learned, in traveling the world, that the reason the world is the way it is, is becuase the world really doesn't want to be saved.

If you think I am being mean or bigotted, look up Lifeguard training, and how to handle panic in the water, it applies to this situation quite well. ✌✌✌✌
edit on 24-6-2019 by thedigirati because: mini skirt distraction

Wow, this is just sick. You're really trying to push this??? Like really!? Last I checked jews were fleeing the germans. Here they're pouring in over the border in record numbers. In germany they went door to door, collecting the jews to send them off to their torture and death. Here the people are flooding into the camps in hopes to get into our country and live a better life.

It's absolutely sickening that any human being would trivialize what happened in world war 2 to score some political points.

They are being detained/incarcerated, and their children taken, before any court has found them guilty of trespassing. In America, you are innocent until you are proven guilty. That's what "catch and release" reflected. The Trump "no tolerance" policy is fascism.


It's absolutely sickening that any human being would trivialize what happened in world war 2 to score some political points.


They DON'T CARE
All that matters is the "win".

It is why they will continue to lose.

They are being detained/incarcerated, and their children taken, before any court has found them guilty of trespassing.

You are detained until trial unless given bail. But that's neither here nor there really;

In America, you are innocent until you are proven guilty.

Sure, if you're here legally. If you're not, the supreme court has ruled many times over that you don't enjoy constitutional rights.

That's what "catch and release" reflected. The Trump "no tolerance" policy is fascism.

I don't think you know what fascism is. You seem to think law enforcement is fascism. It is not.

originally posted by: scraedtosleep
Offtopic: I'm predicting a potus win for trump but a senate win for the dems in 2020. House stays the same.

Trump wins bigly - even the popular vote this time

originally posted by: JohnnyCanuck
People that know from concentrations camps, like George Takei and others who were interned during WWII, are calling them concentration camps. Your argument is with them...I just trust their assessment over yours.

Really do not want to debate this. It is a narrative used today for political purposes, I really didn't hear people during Obama years describe them as concentrations camps and we might as well suggest all our military in the Middle East are also in concentrations camps because they look about the same.

And sorry, if you are defending a regime that is refusing to provide soap and bedding to captured children...that defines you. Best own it.

Neither of us know the true reality here, once again there is always a ton of political narrative. Do you think they are purposely not providing care? I just don't know where you are coming from most of the time. In this case the border is over whelmed OVER WHELMED and the liberal controlled house does not want to increase support, I'm not going to give the Republicans a pass on this either, but I have asked you a number of times what do you think should be done?

Should we just release them on the street? Should we deport them right back into Mexico? Should we bus them to you in Canada? You just want to say "oh the horror" with nothing else.

Support is not some magical unlimited thing, and it seems you have zero concerns that the left is treating this as a political event and not allowing further funds to support to keep the "oh the horrors" narrative alive.

You seem to not see this part at all...Trump wants funds, been asking for funds, tried to even transfer funds from other areas and he gets nothing but legal actions to prevent any of it from happening.