Washington (CNN) - President Donald Trump announced Saturday that he's delaying for two weeks US Immigration and Customs Enforcement raids that were planned to take place Sunday in 10 major US cities, saying deportations will proceed unless Congress finds a solution on the US-Mexico border.

The President's pullback was an about-face in a matter of hours on enforcing his signature immigration policy, following deep criticism from the cities' mayors, top Democrats and immigration activists who called the coordinated arrests and deportations on targeted migrant families "heartless."

A senior immigration official had told CNN on Friday that ICE was planning on arresting and deporting about 2,000 migrant families with court-ordered removals in 10 cities beginning Sunday.

House Speaker Nancy Pelosi called Trump Friday night and asked him to call off the ICE deportation raids, a source familiar with the call tells CNN. The two spoke for about 12 minutes.

White House deputy press secretary Judd Deere confirmed to CNN that a phone call took place.
On Saturday, Pelosi pushed for Trump to halt the raids in a statement, calling the anticipated operation "heartless" and a "brutal action which will tear families apart and inject terror into our communities."

"These families are hard-working members of our communities and our country. The President's action makes no distinction between a status violation and committing a serious crime," Pelosi said.

After Trump's announcement was made, Pelosi tweeted, "Mr. President, delay is welcome. Time is needed for comprehensive immigration reform. Families belong together."

There's many ways to spin it as usual just like a coin. Why does it need to be? Is too much political spin extra, unnecessary for every event, annoying, pointless? Quite possibly but it's a dedicated discipline and practice. People do it on autopilot, it's a learned behavior.

You could say that Trump backed down to Nancy Pelosi and the Democrats. "Pelosi won" or "The Democrats are victorious against Trump". Really? You'd water it down to that? Well, yeah because it makes the other side mad, our team won and their team lost. This tit for tat battle on social media is everyday life to us. If it makes you happy I guess.

You could say that Trump's morality is at play just like calling off the Iranian attack 10 minutes before it were to happen because of finding out the extent of projected casualties at the last minute. He's a good natured, tempered President with a heart.

You could say that he planned to call off the Iranian attack, knew about the loss of life from the get-go before authorizing it, and did it to scare the Iranians while looking like he's good natured and tempered for the voters in the upcoming 2020 presidential election.

He did the same to scare the illegal immigrants and their advocates in the Democratic party, knowing ahead of time that he wasn't going to go through with it. By stopping it the day before it'd happen after a plea from a woman about families, he's a good natured, tempered President with a heart.

In the end, our enemies continue to plot our demise and threaten our military as well as global oil transport, destroy our nation from within via illegal immigration, or those threats were overblown for propaganda purposes to begin with.

Have you noticed the heads or tails betting game that you've been reduced to?
edit on 6/22/2019 by r0xor because: (no reason given)

Sounds to me like he's giving them one last chance to do their jobs and actually work out reasonable legislation to address the clusterf*ck that is the border.

I think they'll fail again. He gave them the opportunity to work something out for the dreamers before and they wanted to screech at the sky instead.

I think they'll do the same here. At least he can say he tried to work with them, while America gets to watch the leftists crap the bed once again.

I have to wonder what kind of “deal” can be made concerning the millions of illegals here.

Yep, there's always the next play.

He tried to work with them, they failed, and now he has authority just like the government shutdown and national emergency to build the wall afterward because of failed negotiations.

According to a source familiar with the situation, McAleenan on Friday pulled out of a planned Sunday show appearance on the day the ICE operation was slated to begin, adding to speculation that there's a split with the White House.
A separate source told CNN that McAleenan was at the White House Friday and "not in a good way."

An ardent supporter of Trump's immigration policies, Tom Homan, the former ICE director and now a FOX News contributor, seemed to suggest Saturday that McAleenan leaked information about the ICE operation to media. CNN has reached out to McAleenan for comment.

"You got the Acting Secretary of Homeland Security resisting what ICE is trying to do. In the Washington Post, in numerous media outlets, he does not support this operation," Homan said on Fox News, adding, "This leak, which I know where it came from, we all know where it came from. That story only benefits one person, put these officers at greater risk of harm."

Leave it to the former ICE director turned FOX News contributor (he likes the limelight) to bring the dirt and conspiracy theory about the dissident "acting" Homeland Security chief. Acting in quotes because the last one lost their job for doing less than this. It's too close to the election to make the same decisions on leadership changes over disagreements.

I think McAleenan had a point. It's too close to 2020 to be making sudden, brash moves that further polarize and give the opposition ammunition for the election.

I think Congress leaves for another 10 day vacation this coming Thursday.
edit on 6/22/2019 by carewemust because: (no reason given)

THE deal of deals...aiding and abetting charges filed for sanctuary city leaders. Round them up too. But that’s just me.

posted on Jun, 22 2019 @ 05:44 PM
link
ICE doesn't have the resources or manpower to even take care of 100k families. The dembs are willing to just let trump threaten but fail.

Or, ICE knows that given this delay, those that would be targets will be moving around to different locations in the hopes that they won't be discovered where they were before the delay. But, imagine if you will that they are now under surveillance to watch them make their moves. Like smoking out a groundhog before you trap him.

posted on Jun, 22 2019 @ 06:08 PM
link
He should have followed through on the raids. The left and right have had decades to fix the problem giving them 2 weeks isn't going to do jack.

What is done is done so in two weeks I hope he follows through.

Who knows the reasonings for, we have a very special and radical POTUS that has turned conventional wisdom upside down, resulting in new avenues of approach never previously thought of.

HE PUTS US ON OUR TOES AND MAKES US THINK.

For years we know the US beaucratic system is slow and painful, but with Trump, he has destroyed those previous notions and aims to tackle real world actionable problem solving by getting Congress in getting off their collective high horse asses.

If anything, he put the spotlight ON CONGRESS FOR ALL OF AMERICA TO SEE IF THEY CAN COME TOGETHER AND GET THIS PROBLEM SOLVED within TWO(2) Weeks.

originally posted by: Creep Thumper
I think Trump got played by the left on this one. The delay will allow the targets to escape.

The list for deportees is LONG, I'm sure only a small portion were targeted.

Sanctuary cities need to be rooted out and destroyed.

In the end, that's the whole issue, getting them out of sancturary cities, where would this mass exodus flee to outside of sactuary cities???

Did you think these were small family units plucked from various locations around the US? No, these are targeted AT sanctuary cities, they aren't going anywhere.

originally posted by: Creep Thumper
a reply to: Arnie123

This only reinforces my notion of Spotlighting Congress for all America to finally see and realize some of these people are clowns.

However, you're right as well and one we can hope to see a trend in other people in knowing full well that Dems are obstructing.

I think Congress leaves for another 10 day vacation this coming Thursday. 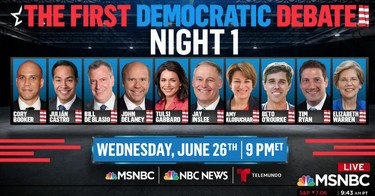 My opinion is that Trump is setting the Democrats up. There is no way they actually legislate a solution that really involes real immigration reform.

Either way it ends up, Trump looks good. Either he gets the Dems to produce a meaningful immigration reform, which is a win for Trump or the world sees how utterly useless the Dems are at passing any real immigration policy. It's a win either way for Trump.

”How could Democrats be so heartless that they couldn't even come up with a solution to immigration". They lose either way, and Trump gets to watch the spectacle unfold.

Thing is by all accounts if they worked together it could be done in minutes.

But like always they want to attach everything they can to any legislation, you know ridiculous stuff that they know wouldn't ever pass any other way.

That's why so many Americans on both sides have so little faith in congress.

Looks like the president is giving them one last chance.

Despite the 90+ percent negative press.


Glad he's doing things I approve of... killing TPP, NAFTA, ending/drawing down military engagements. Negotiating peace. Not going to war when he had the chance. Focusing on human trafficking. Improving economy. ...