I knew him since he joined ATS, back in 2005 (I joined ATS the year before), as our favourite topics were mostly the same, space exploration and UFOs, but we had many differences of opinions, both in interpretation of the available and the way of presenting it.

Those differences, instead of making us adversaries only brought us closer, as we saw those differences for what they really were, just different opinions, and our acquaintanceship eventually turned into a long distance friendship. Also, he was, above all, a good person, making it easy to like him (if we ignored those differences in opinion).

Being separated by many kilometres and a few time zones, we rarely spoke with each other in real time, and only in writing, so I never really spoke to him, and we never got to do that thread about the mountains on the Moon.

I was never good with words, and in times like these I'm even worse, so I will just add this:
Real friends are not easy to find. I will miss him.

My condolences to his family and friends.

RIP zorgon. My condolences to his family and friends.

Fly to the stars and find the answers you were always looking for.

I always enjoyed his threads.
edit on 21/6/19 by LightSpeedDriver because: Typo

You will be missed.

As hopefully we all will be.


R was too young.
RIP to one of the great weird investigators.

I remember him. Glad he had a friend here to bring the news. He will be missed for sure.

Best to you and his family.

He will be missed

Hefficide
+21 more
posted on Jun, 21 2019 @ 07:10 PM
link
When I first decided to start posting on ATS and created this account, I found myself incredibly intimidated and hesitant to post. I'd grown up before the Internet existed and my exposure to the kinds of things discussed here was essentially on the "I saw the In Search Of episode about that a few times!" level... And the conversations here were light years beyond that.

While I didn't feel like I had a ton to offer - I still had a deep desire to be part of the conversation on some level.

So I worked up my courage and made a few very tentative "Great thread! Love your take on this subject OP!" posts in an attempt to get my foot in the door.

ATS used to have a prevalent feature where other members could choose to make you their ally or their foe and if another member did so, you'd receive a PM saying as much.

Well no sooner had I posted a few times than those PM's started rolling in.

I'd been foe'd. By several people in fact.

It kind of gut punched me. I'd barely said anything and already I had enemies? I would later discover that there were a handful of ATS members back then who enjoyed foe'ing every single member, new ones included, for some reason - and that's all that had happened. But I was already nervous about posting and those foe notifications nearly caused me to log out of ATS and not return. I felt like the "not welcome" mat had been laid out.

Only as I sat there wondering what I'd done and pondering leaving for good - my PM notification lit up again. I opened it expecting to find another foe notification or maybe even a moderator message saying "You're banned noob" - as that's where my head was at.

It wasn't anything like that. It was a notice that somebody had added me as an ally. A friend!

I clicked on the username and the page loaded.

Back then I had no clue what any of the stuff on profiles meant - but this new friend had a big avatar and a lot of large numbers on their profile. Lots of flashy things that left me with the feeling that this was the profile of a person well regarded in the community. Somebody with standing.

And this person had extended a welcoming hand to me!

This single gesture made me feel welcome and a bit more confident. It is why I didn't log out, never to return.

That friendly member was Zorgon and his kind act is literally why I am here.

Godspeed old ally.
edit on 6/21/19 by Hefficide because: (no reason given)

posted on Jun, 21 2019 @ 07:13 PM
link
Zorgon used to grab my attention like nobody else, will always be one of the best posters this site ever had!

For those that do remember him, here's a shot of him at the San Jose UFO Conference 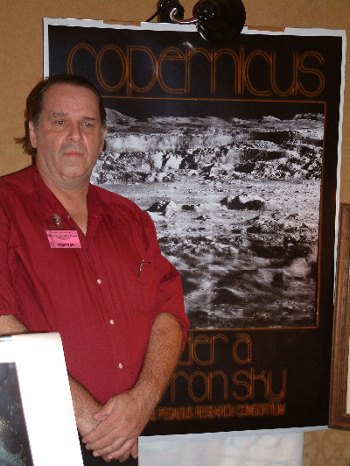 I was in a similar situation to you when he was here, we had a friendly rivalry, he had a wealth of knowledge and information, and was always willing to share it.

He invited me to join his site years ago and even interacted on facebook a few times.

He had a lot of insight and a great resource on things that was not readily available .

I will miss that man, he was one of a kind.

God speed Ron and may you find the truth to all that you have sought.

Crazy how small interactions can mean so much depending on where a recipient is at in the given moment.

Thanks for sharing that hefficide. That was a nice story to read tonight. Sorry for the bad news, but may peace lay ahead for Zorgon. Something we work our whole lives to find.
edit on 21-6-2019 by CriticalStinker because: (no reason given)