posted on Jun, 21 2019 @ 06:09 PM
link
This particular meme has been irritating me for over a decade . People that want it to be true believe it. Some people use it knowing it’s not true .

Then there are people that don’t believe everything they see like me and I’m sure many others here . 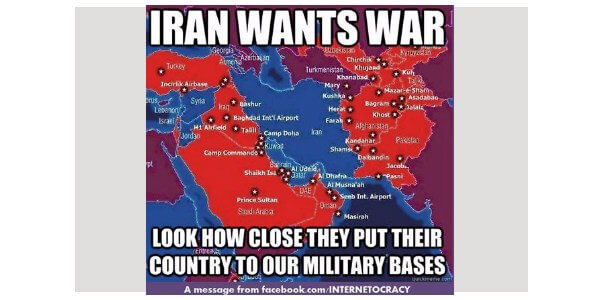 Former ISAF base with forces for both Italy and the US stationed there. Italy was in charge of the command.One of the first areas to be handed back to the Afghan military.

Home of the third wing of the Afghan air force.

The US withdrew and shortly afterward the Taliban attacked. They had embedded Iranian special forces. Afghans say Iran is funding the chaos.

That’s why I hate that map.

REMF not a threat

As of 2009, the American private military contractor DynCorp had a contract to staff and serve a US military storage-depot at this base.

All I can find is that at stores pre-position equipment. stands to reason there would at least be maintenance people there.

Sorry propagandist its a UK air base.
tigerbrain.com...

Under control of the United Arab Emirates. Stationed by USA and French air forces. Mostly support and surveillance aircraft.

There’s about 45,000 US troops stationed on the east coast of Saudi Arabia.

But Iran is far from surrounded they are also the aggressor in Afghanistan.

To sum things up It’s hyperbole.

Now everybody do me a favor.

Quit showing me that damn map! 😇

Thank you for taking the time to go through some of that.

So it's nice to see someone less lazy than I putting it out there.


Away’s back I had a link from the military on how many troops were stationed at each base/camp/airport. Lost it but I remember that about half the bases had under 100 people and some as few as two .

lol those maps are as about as up to date as the ones Eisenhower used when he was active duty.
edit on 21-6-2019 by putnam6 because: (no reason given)

originally posted by: TritonTaranis
While we’re at it, does somebody want to throw in the Israel stolen land map?

Its more useful to show them the maps of how much land tried to give back to the Palestinian state, and they refused

Long Story short, its a lot more than they had before the war

originally posted by: Spacespider
Cant we just nuke all the middle east and get it over with... that is what everyone want anyway.

No its not, especially with all the sacrifices our military personnel over there, their memories would be better served by making it a safer place that has better basic human rights. We could have nuked it since the 70's

even though there are some warhawks in Trumps administration don't think even Trump wants war. Right now its all posturing

More than that the whole premise is a joke...

No one questions the fact we have the superior military....

The real question is “what will it cost in blood and treasure”... and the number of military bases doesn’t answer that question at all..

No seriously I am effing ecstatic.

posted on Jun, 21 2019 @ 07:37 PM
link
Whether the bases belong to America directly or their clients, proxies and puppets, the effect is the same.

They don’t even know they’re shooting theirselves in the foot. Instead of putting up a glamour shot could’ve shown 3 or 4 bases on Iran’s eastern border , it would’ve been accurate and enough to make their point .


Instead true to the leftist charter.

They thought with emmotion and blow everything out of proportion.

While discrediting a point that is accurate.


Liberals are kind of like rain, they fail everywhere .

What about the closed ones ?

posted on Jun, 21 2019 @ 07:47 PM
link
Funny how regardless of "bases," Iran is sandwiched between Iraq and Afghanistan, both countries the US invaded and in which we continue to have a military presence.

Iran has been in the cross-hairs for quite a while.

posted on Jun, 21 2019 @ 07:52 PM
link
Not one gutless leftist would be upset if that many bases had surrounded nazi Germany

Any islamic regime is the enemy of ALL mankind. More bases should be surrounding that country.

How dare they build a pipeline to China! How dare they sell oil in a different currency than dollars! HOW DARE THEY!!

They're "Memes".. An exaggeration.

But don't kid yourself, we have more American troops in that region than we care to imagine.
edit on 21-6-2019 by odzeandennz because: (no reason given)

Meme was a poor choice of words on my part. Especially when it was something that was continually submitted as evidence.

Did you ever use it ?


What do you think about Iran’s incursion into Afghanistan as soon as we left FARAH ?

I helped close a lot of the FOBs on that list. Others from my unit closed as they left. We operated mostly in Southwestern Afghanistan. This was OEF 13-14.