AOC: The U.S. is 'running concentration camps on our southern border' 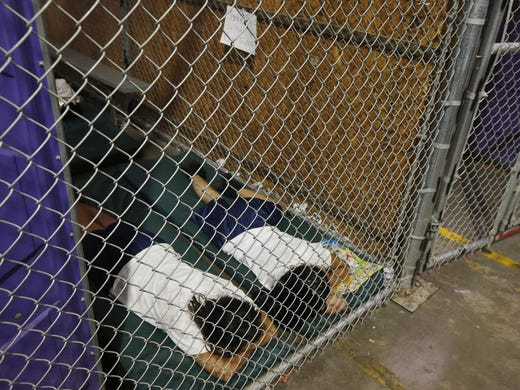 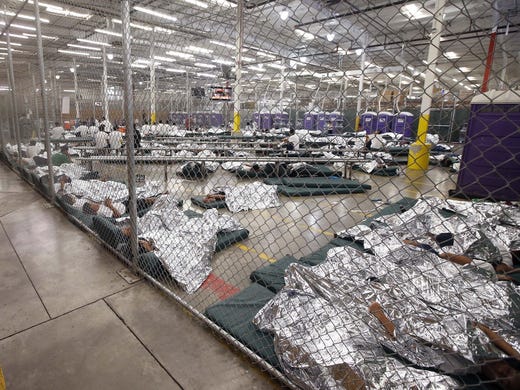 But they are still children in cages, not gangsters, not delinquents. Just children, 900 of them, in a makeshift border-town processing center that is larger than a football field. They pass the day sitting on benches or lying side by side on tiny blue mattresses pressed up against each other on nearly every square inch of the floor in the fenced areas...

...But most of the children lie motionless on side-by-side mattresses with looks of intense boredom on their faces. Inevitably, given the number of people, it smells of feet and sweat and straw, giving it the look and feel of the livestock areas at the State Fair.

Three times a week the children are allowed out of the fenced-in areas to go outside to a concrete playground with a small basketball hoop and benches under a tent where they can congregate...

...The journalists on Wednesday's tour were not allowed to talk to the children, and only one still and one video photographer were allowed to record images.

It does appear to be like a concentration camp, except the whole thing was devised by the Obama Administration. Something often left out of articles. I wonder if AOC is aware she is lambasting her own parties idea of how to deal with the children? You can't make this stuff up.

Now the problem is much larger and for the most part, it's still being handled in a way set up under the former President Obama.

posted on Jun, 18 2019 @ 02:26 PM
link
Some one needs to ask Accidentally Occasional Cortex what the difference between a concentration camp and detention center is.

Because clearly she doesn't know, or know it was obumas democratic admin that mandated families be separated and children held in cages.

She wants to talk rhetoric now?

She needs to stop talking and start listening.

Same goes for all the leftists, those morons are going to cause more trouble than they're worth.

Which isn't saying much considering most leftists and other corrupt politicians are broke bums when they enter politics and end up a member of the 1% when they leave.

They didn't fund their campaign financially independently, they accepted millions from donors and end up keeping most of it, especially if they lose.

It pays to be a loser, when you're a corrupt parasite.
edit on 18-6-2019 by ADVISOR because: Corrected auto correct because it wasn't

This is a short letter/message that will, in its own small way, attempt to correct your misconceptions about what constitutes a concentration camp...

This is a concentration camp.

This, you bloody idiot, is a concentration camp, and fascists.

When you use hyperbole, it might help if you actually had half a God-damned clue about what you're talking about...wouldn't it? Or is it just easier to mouth off your talking points and move on to your next embarrassment? Quite frankly, and I say this with all conviction, you're probably too stupid to see my point...

Actually, a question, if you will... Have you even been to these "concentration camps"? Or are you afraid that it would put paid to your attempts at slander? I suspect that that is very much the case. Or if you have been to the "concentration camps", and know the actual truth of the matter, you still make these asinine accusations, you stand revealed as a political hack with the IQ of a peach pit.

Refugees are people not living in their own country, and are either barred from returning or are afraid for their lives if they return.


DHS Myth vs. Fact: Asylum Proclamation and Rule
In the last year we saw 89% of those claiming asylum from the norther triangle pass a credible fear screening. However more than half never applied for asylum after being released or failed to show for their initial hearing. Eventually, only 9% of those who applied for Asylum out of these countries actually qualified before a judge. The bottom line is that a substantial number of applicants fail to appear for their final hearings before an immigration judge, or fail to comply with removal orders. Even when they appear for their hearings, only a very low rate are ultimately granted asylum.

posted on Jun, 18 2019 @ 02:52 PM
link
Isn't Cortez part of the Government? Does this mean that she is running these camps? If she really believes this crappos, then why doesn't she publicly go to the board and talk to the people protecting it, and see for herself what these camps are, and how the people in these camps are getting caught.

Her outrage is only matched by her lack of caring about said outrage.

We know you do. This is why no one takes your asinine posts seriously.

By the same token, Trump supporters' posts should not be taken seriously because Trump says some of the dumbest # ever uttered by a politician.

I'll tell ya what - you post your best Trump dumb sh!t and I'll post my best Pelosi/Waters/Schumer/AOC dumb sh!t.

Then we can compare notes and determine who exactly says, not 'some of' but THE dumbest sh!t ever.

originally posted by: DBCowboy
a reply to: Duderino

Really? Can you show me where in the Constitution that foreigners have the right to vote?

You're confusing inalienable rights with given rights. Inalienable rights are those given by the Declaration of Independence, such as life, liberty and the pursuit of happiness. These apply to everyone.

Voting is a given right and can be taken away, and we know this is true because until recently women couldn't vote, for example, even though all their inalienable rights were still protected under the Constitution.

The Declaration doesn't give or grant rights.
They are inalienable because they are from God, the Creator, grand architect etc etc.

The Charters of Freedom, declare our Natural rights and define them for clarification.

They further define a Constitutional Republic formed for and by We the People.

As for voting rights, once upon a time only land owners could vote. Maybe it should still be a factor.

Of course as more people were acknowledged as being equal they were also allowed to vote and be considered equally.

Times change, it's not the 1990s any more let alone the 1800s. People today need to wake up and realize that fact.

We live in a society where all legal not felon citizens are equal. There's no more segregation, the Military phased that out with mixed units.

There's no more slavery in the USofA, we were the second Nation in history to outlaw it.

There's no more unbalanced rights, every one can be equally miserable whether they are straight, gay, male or female, black, white, orange or polka dotted.

American citizens can voice their political opinions without being lynched in the streets. Not every country can say that.

Gays can be openly homosexual, without being thrown from the rooftops. Not every country can say that.

Point is, America life is good, it not perfect but then again show me where perfection exists.

People complain today because they have nothing better to do, than make up fake gripes to cry about.

Some people are bitches, they bitch about everything. Always have always will.

The Declaration of Independence gives nothing. It merely begins to state what our natural, or God-given, if you prefer, rights are...

The Constitution was, in its essence, the follow on to the Declaration. My humble opinion, of course...your mileage may differ.

She doesn't use them lightly, she uses those words carelessly and thoughtlessly. Lightly would imply at least some thought went into it when clearly none has.

posted on Jun, 18 2019 @ 04:12 PM
link
Somebody either needs to get her a new earpiece or fire those voices in it. That and a shock collar might help.

Our great president will begin weeding out all the illegals next week.

Where are these "concentration camps"? You say she's right...so you must, therefore, know where they are, right??

posted on Jun, 19 2019 @ 04:47 PM
link
First of all those pictures where back when Obama was President...They where Not concentration camps either..more like detention centers designed for temporary holdings...AOC is insulting all the millions who really are or where killed in concentration camps...Shows how little experience She has to be a good politician...Trump knows how bad the situation is at the border and I suspect the more experienced democrats also know it...The question is will AOC remain this popular in the future and continue these goofy radical comments? ..She has a like ability factor about her among the youth..She is working with Ted Cruz ...If She runs for U.S. President in the future She could easily win with the way politics has changed dramatically in this country.....Then things could get scary if she continues her ways......I think the damage is all ready been done when Hillary Clinton never went to jail..
edit on 19-6-2019 by Jobeycool because: (no reason given)

originally posted by: ZenTam
I'm always embarrassed and angered when they throw around labels like Nazi, concentration camps etc... If I was a Holocaust survivor I would be beyond mad and calling them out on their BS. How people even listen to or believe this crap is appalling. In school we all learned about the Holocaust atrocities. You can do a quick search and see the pure evil that was inflicted on millions. To even imply that anything like that is going on is sickening. I can't believe they have continued to get away with it.

Actually it is starting to happen again thanks to those in the left who believe in abortion, and even "after birth abortion" or the murder of newborns. The nazis did not become evil overnight, and many in the left are following the same steps. For crying out loud the left's most prolific idol "Margaret Sanger" was a nazi and her Planned Parenthood clinics were there to, as she herself put it "make a better race and get rid of other races." She even had a beef, like many in the left today, with people who would not lean as far left as she did." Margaret Sanger even openly called for the murder of politicians who found her ideas repugnant and fought against her evil ideas. She also incited not only for those who follower her to violence, but also terrorism.

Nowadays "the environment and saving the Earth," etc are excuses being given not only for population control, but even for de-population.

We already have "progressive" demented people calling for the release of a virus, or some other way "to wipe out a % of mankind, or as many as possible." These are the kind of people that the nazis themselves were. Evil, and with no remorse for what they did or what they thought.


edit on 20-6-2019 by ElectricUniverse because: add and correct comment.

originally posted by: fredrodgers1960
AOC is the answer to every GOP prayer in the last 3 decades.

I read tonight that she thought Roe vs Wade were two methods Illegal Immigrants were using to cross the Rio Grande river.

I mean comon, are you serious with this comment?

The fact that concentrations camps are now an institutionalized practice in the Home of the Free...

Let me stop you right there, Representative. It's the "Land of the Free, and the Home of the Brave."