How far is Trump willing to push Iran? Dream of nuclear escalation (6 years ago!)

posted on Jun, 14 2019 @ 08:38 PM
link
I have frequently dreamt of events which have come to pass in the life of nation states, and actions of terrorist organisations. Several have been recorded as my general 'social responsibility' dead drop. I feel I have to share, and heck, it can't hurt to have that little bit of added context or possible future scenario to game out & assess in order to get through to the least destructive, most constructive & collaborative solution. My dreams foretold the rise of ISIS & a broken arrow situation over the Scottish highlands several years ago. It's a gift, but it brings immense struggles with it, stuff that I never would have imagine possible when I joined the church in 2002. Anyway - dreams & visions are my speciality, and they're often helpful. It's nothing to do with me, I'm not super righteous or special - I've just been selected for the task & that's that. I'm basically a recluse, with a long-term disability, though I have a family who love me & i feel moderately secure in our general life together here in the North of England.

Six years ago I had a long dream during a relatively peaceful night's sleep during a fairly peaceful time in my life. I dreamt of being on a barge-type boat on what was represented as a very wide canal, with lots of boats going up & down it, with desert-type landscapes on either side. Coming to land at one point, I walked across some dusty desert tundra & cam across what seemed to be a wasteland straight out of Mad Max. There was a bowling alley (I guess symbolic of normal activities for a peaceful nation to engage in) which had been bombed out, with the neon sign hanging off. Further along there was a functioning leisure centre/ swimming pool. Inside it was full os Muslim men, women & children. The men were mainly sat around the pool at tabels, while some of the wives & most of the children were splashing about, having a great time swimming around in the pool.

This aspect of the dream sort of infused me with the sense of how even though we as Westerners are very different from the Islamic peoples; they, naturally - mostly - want the same peace, security & enjoyment of life that we ourselves want. Apparently 25% of Muslims worldwide either strongly agree with, support, or believe in the use of violent & indiscriminate Jihad against the West. They may get involved as attackers, they may support them with money & resources, or they may evangelise for the cause in their networks & mosques, youth groups & so on. But 75% are relatively sane, normal, decent people. We might not have much in common, but we can tip the hat & acknowledge them in their way, as long as we both sides keep things civilised. Trouble is, the attackers/terrorists deliberately use civilian cover, making it that much harder to root out.

Still, that was that part of the dream. Finally, walking further along this vast, wide watercourse, looking out at the various boats chundering up & down, I saw a bright flash over the entire scene, with the sudden detonation of a thermonuclear bomb, sending a savage shock wav & raising a hellish-looking clowd on the horizon. This event was at the Northern end of where the watercourse seemed to terminate (I didn't walk that far), so I would guess it could be any one of the Mid_Eastern nations, if we are to consider that the watercourse is actually representative of the Strait of Hormuz, where Iran has allegedly been interfering with merchant shipping in recent days.

To my mind, this whole think reeks of a false flag, but who knows - sometimes things happen which make no logical sense at the time, but thereafter it can be argued by historians that 'it' could never have happned any other way.. But that's for the historians, and not for us. Ours is not to reason why, ours is but to do & die. We all die. In the world we now seem to be living in, we may all have to become more comfortable with the concetp of dying, in mid-stream of our life, not having achieved our dreams, not havinng met the partner to share those dreams.

Part of me thinks Damascus may well fulful Biblical prophecy soon, depending on the scheming of those at the table who sit & wring their hand, saying one thing, meaning another, then doing a third while telling another group it was someone else entirely! I'm not au fait with how international nuclear risk incidents are handled, but I know that prophecy is given in order that those with the power to change the outcome, can look for that opportunity as the crisis unfolds, and pull back from the precipice at the critical momet - or pull another back - using novel means as necessary (lots of special pieces of kit in the Quartermaster's box of tricks these days, I would imagine - for some reason I think weaponised Ebola could be used to create a movement of nations away from atrigger pooint, but who am I to judge how these things are done?!)

Thanks guys, and take care of each other. Who knows what tomorrow may bring.

That's just Stupid Reasoning here . The President is Not Pushing Anything on Anyone . You must be referring to the Neo-Cons and Commie Socialists who want to further Weaken the United States with more International Conflicts that have no Connection to Americas OWN National Security ..... 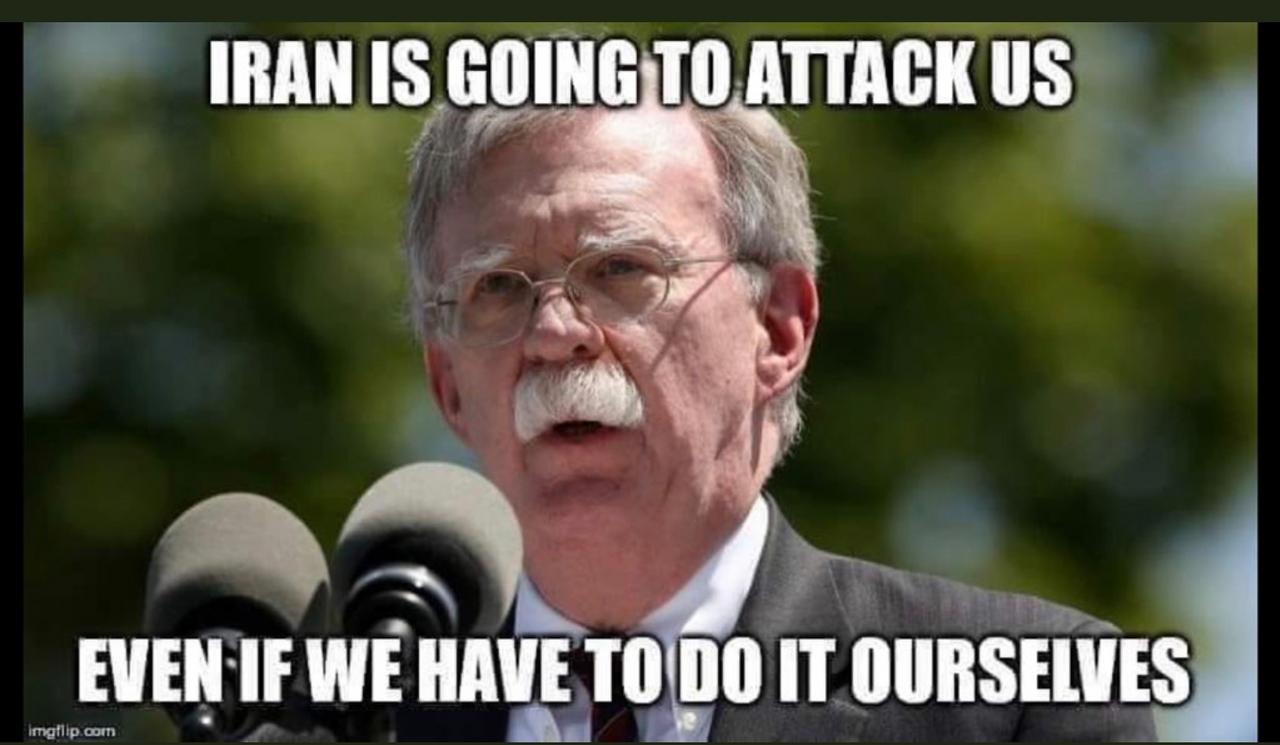 Hahaha I love this.

“Now that Obama’s poll numbers are in tailspin – watch for him to launch a strike in Libya or Iran. He is desperate."
2012

“Don't let Obama play the Iran card in order to start a war in order to get elected--be careful Republicans!"
2012

“I predict that President Obama will at some point attack Iran in order to save face!"
2013


“Remember what I previously said--Obama will someday attack Iran in order to show how tough he is."
2013

“Remember that I predicted a long time ago that President Obama will attack Iran because of his inability to negotiate properly-not skilled!"
2013


Talk about TDS. You Trump water carriers got some TEO (trump erotic obsession)
The guy is a #ing con man and you all got conned. Big time. #ing admit it and let's move on. Everyone gets tricked. #, us Obama voters didnt like a whole lot of # he did. The GOP has finally publicly distanced themselves from GWB. There's nothing wrong with admitting you #ed up.
Why are you all hanging on to this wild belief that Trump is some kind of victim here?
Them coal jobs aint coming back. Trump doesnt give a # about you. Even if someone told him how hard you argue for him on "abovetopsecret" - he would forget about you faster than he can say "China"
edit on 15-6-2019 by MrPlow because: (no reason given)

Yeah , the President has made some " Odd " Choices in his Administration , and Bolton is one of them . Did he Hire him as a " Compromise " to the Deep States Government Officials that will Remain Nameless here ? How about SOS Pompeo , I hear he is a " Deep State " Asset to . Seems President Trump COULD be " Cleaning " House for the Next 6 Years IF Reelected of All the Cockroaches Infesting the Government in Washington who are Fighting Tooth and Nail to Refuse to Obey his Duly Elected Authority as POTUS . He Needs MORE White Hat Allies to Cover his Back IMO , Hope they Respond to the Patriotic Call for the Sake of Our Continued Democratic Republic ..............

originally posted by: Gothmog
Perhaps you need to read this
From everyone's fake news site - CNN


Hmm... Smells to Me like Another Gulf of Tonkin Maneuver Perpetrated by the Neocons in the Presidents Administration for the Purpose of Creating yet Another Unwinnable Conflict around the Globe that will Cost Americans Dearly .......