CNN explains how to get away with foreign dirt.

On Wednesday, Cuomo blasted a pro-Trump panelist for invoking the dossier, which was complied by former British spy Christopher Steele. "Look, it's just not apples to apples," Cuomo told CNN commenator Rob Astorino. "We don't have any proof that Russia as a government came and said 'here's value for you on Donald Trump and you can pay us for it if you like.'" During his "closing argument" segment Thursday night, Cuomo made his case for why invoking the dossier in the discussion is invalid.


Here is the juicy part:


"So there needs to be a foreigner giving, for free, a thing of value in connection with an election," Cuomo explained. "That is pretty much exactly what [Donald Trump Jr.] did. He was excited by a meeting in which he would meet with Russians who, quote, 'offered to provide the Trump campaign with some official documents and information that would incriminate Hillary... that was part of Russia and its goverment's support for Mr. Trump.'"

If you watch the video in the tweet, you see Cuomo explain how different the Steele Dossier was, since a third party was involved and most importantly, they PAID for it.

So President Trump, please know that CNN has green lighted you getting any and all "opposition research" from pretty much any foreign nation, just as long as you give them a few bucks. And I think it would have to come from campaign finances to be totally legal.

And no, I'm not kidding, this is the logic used to justify Clinton doing the same thing. So rabid lefties, TDS sufferers, Trump haters, did I miss this point, or is this what he meant. I really do need clarification on this if it's wrong.


You're making it all too complicated.

HOW TO GET AWAY WITH FOREIGN DIRT:
STEP 1: Become a Liberal Democrat
STEP 2: Run for President
STEP 3: Repeat STEPS 1 & 2 as often as needed

In July 2016, the Obama administration accepted unsolicited information from Alexander Downer, an Australian diplomat who just happened to have helped arrange a $25 million government donation to the Clinton Foundation years before. Downer said that he had witnessed a Trump campaign aide, George Papadopoulos, bragging about some dirt that the Russians supposedly had on Democratic candidate Hillary Clinton.

Though Downer’s claim was reported two-plus months after the alleged event, and was only hearsay gathered at a London tavern, the Obama administration gave it to the FBI which, in turn, thought it was weighty enough to justify opening a counterintelligence case against the lawfully elected Republican nominee for president.

In other words, the Democratic administration accepted dirt from a foreign friendly and used it to justify investigating its GOP rival.

And then, OMG, they did it again just a few weeks later.

hearing the same names time and time again, with regard to all things shady and slimy. it's almost as if there is a small group of assholes who operate without borders or laws. Perhaps I'm looking at it wrong?

Andrew McCabe: Not Illegal For Americans To Contract Out Opposition Research To Foreign Individuals🤣🐔🤣

posted on Jun, 14 2019 @ 04:59 PM
link
I think there is a lot more to the Australia connection than we are being told. I read about some of this awhile ago and people in Oz were flipping out thinking someone down there was going to loose their job (a high profile politician - maybe PM?). I haven't seen anything about it since but when I read the OZ media, it sure seemed like a slam dunk and they had already considered their politician guilty.

I dont' have time to research this ATM, if anyone wants to dig into this I think it might be juicy - important. I know the media knows about it, there was brief mention of it by them in a news clip I saw, so they are hiding it for some reason.

Also, we should look back at the campaign finace donations by the Chinese back in the 90's to the Cintons and all that was covered up there. There is a book (King of Cons) written by a convicted criminal (like a $.50 book at a discount store) that was really close to the Clintons, set up fundraisers for them (one where the Chinese attended and donated) and scoops all kinds of dirt on them. It was written maybe around 2000-2002 when he thought they were out of power/politics so I think there may be more in the book than what is known. It's been a while since I read it and I wasn't interested in that aspect at the time (~2004 or so) b/c Hill hadn't done anything yet. I'd suggest anyone who wants to check out the book it was a decent read even when I didn't like or know about politics!

"So there needs to be a foreigner giving, for free, a thing of value in connection with an election," Cuomo explained. "That is pretty much exactly what [Donald Trump Jr.] did. He was excited by a meeting in which he would meet with Russians who, quote, 'offered to provide the Trump campaign with some official documents and information that would incriminate Hillary... that was part of Russia and its goverment's support for Mr. Trump.'"

Ok - I have to point out a few things about this - because this crap infuriates me.

1. This meeting was setup with a friend of Trump Jr. - not the RUSSIANS

2. This woman never declared she was working for the RUSSIAN government - in fact it is quite possible the Trump group did not even know her nationality.

3. At the time of this meeting - no one had ever heard of Russian collusion - there would not have even been a need to avoid a Russian because it would look bad, unless she made it clear in the meeting ill intentions.

4. She never gave them any actual info - the whole point was to get her into a room with the trump campaign to frame them for Russian collusion. Why do I think this - because - A. that is what the meeting has been used for. B. Because she met immediately before and after with Fusion GPS's Glenn Simpson.

5. How did the Russians support the Trump campaign with this meeting - when A. She did not identify herself as working with the Russian government and B. Provided no useful info

CUOMO and everyone that believes this meeting is nefarious one iota is not processing the facts at all. 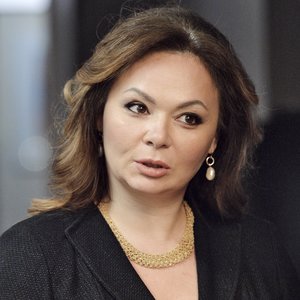 
I wonder if that was in the Mueller Report ? Hmmm 🚿

I was going to post about Schiff's grasp at nude Trump photos from Russians. Is Cuomo saying that is different as well? Schiff want paying for those either?

since none of the resident leftovers have had a say in this, their silence is noted. I think we have a winner here. Trump just needs a few "degrees of separation" and the MSM and haters will have to suck it up. Perhaps if Biden makes it all the way to the table, the Ukraine can offer some information to a US lawyer, who in turn could be hired by Trump campaign to pass along information. And I'm not sure how good Biden would look after hearing how he used his position to get his boy out of trouble, and into a big pile of cash.

The last time I saw this much stretching I was trying to put on yoga pants.