The ocean located on one of Jupiter's moons - Europa, contains table salt just like that found in Earth's seas.


Jupiter's close approach is definitely helping scientists discover new things about and on the planet itself, and in this case -- also it's satellites.

Europa is one of the intriguing water worlds in our solar system and potentially a place where life could exist in a subsurface ocean. The discovery of sodium chloride means Europa's ocean could look more like those on Earth and even possibly include salt. Now, astronomers may have to think differently about the composition of Europa's ocean.

The study was done by a visible-light spectral analysis of the yellow spots on Europa, finding the salt.


s]Previously, NASA's Voyager and Galileo spacecraft performed flybys of Europa, which led scientists to discover that the moon has a salty liquid water ocean beneath an icy shell. An infrared spectrometer aboard Galileo studied the shell and detected water ice and magnesium sulfate salts, which are similar to Epsom salts. It was believed that the shell was similar in composition to the same ingredients that made up the ocean.

"People have traditionally assumed that all of the interesting spectroscopy is in the infrared on planetary surfaces, because that's where most of the molecules that scientists are looking for have their fundamental features," said Mike Brown, study co-author and the Richard and Barbara Rosenberg Professor of Planetary Astronomy at the California Institute of Technology, in a statement.

But the W.M. Keck Observatory in Hawaii provided new data with higher spectral resolution to show that the salts weren't magnesium sulfates. 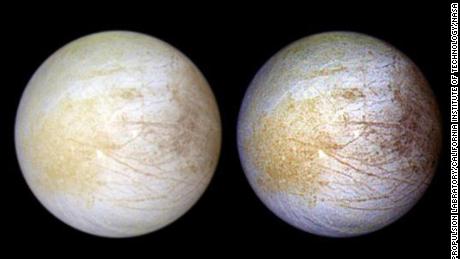 We thought that we might be seeing sodium chlorides, but they are essentially featureless in an infrared spectrum,

Scientist's at NASA's Jet Propulsion Laboratory, took ocean salt samples from Earth and hit them with radiation to simulate what it might be like on Europa. The sea salt changed color and could be identified in the visible light spectrum as yellow. The area on Europa called Tara Region, is where yellow is most prominent.

Follow-up observations with the Hubble Space Telescope confirmed that the yellow color of Tara Regio was due to irradiated table salt on Europa's surface.

"Magnesium sulfate would simply have leached into the ocean from rocks on the ocean floor, but sodium chloride may indicate the ocean floor is hydrothermally active," said Samantha Trumbo, lead study author and California Institute of Technology graduate student, in a statement. "That would mean Europa is a more geologically interesting planetary body than previously believed."

(If some crazy Europa x Earth war breaks out though, I want to abstain from taking sides, and declare allegiance to the planetoid object, formerly known as, the planet Pluto.)
edit on 14-6-2019 by Archivalist because: meh2

So while airless it could still be home to chemo-synthetic lifeforms if it has deep ocean hydro thermal vent's and it could of course have pockets of trapped gas beneath it's icy shell forming short lived atmospheric like regions on the surface of it's ocean, of course this also means' that if there is such life than chemo-synthetic life from Europa could potentially survive here and chemo-synthetic life from the earth could potentially survive there, while the potential for a probe to cause cross contamination to either biosphere is almost non existent it must still be factored into any future attempts to take samples form Europa to bring back to earth for study.

But excitingly it also makes the potential for life on Europa also higher as if there is also an active rocky body under the surface ocean that is geologically active then there is a source or potential nourishment for any life form that may have the potential to exist in the dark and mostly gas free environment below it's icy crust.

posted on Jun, 14 2019 @ 07:13 AM
link
Awesome!
And to add to the topic, if you take a gander at Jupiter with a telescope or what I used last night- binoculars, you can not only see the planet but I counted 4 visible moons.
They are just little pin pricks with binoculars, but still cool to see.

(If some crazy Europa x Earth war breaks out though, I want to abstain from taking sides, and declare allegiance to the planetoid object, formerly known as, the planet Pluto.)

I'm not taking sides either. Europeans are people too.

posted on Jun, 14 2019 @ 12:21 PM
link
I would like to try some of that Jupiter Sea salt and compare it to our sea salt here on earth. But by the time a ship gets to there and back to get it, I will be dead probably or maybe I would not even remember I said I would be a lab rat.

originally posted by: ArMaP
Interesting news, but I hate clickbait titles like this.

Well, DUH! How otherwise would the salt get there? It's not like we have salty asteroids in the Solar System that deposit salt with each hit. Of course it came from the ocean underneath.

originally posted by: wildespace
Of course it came from the ocean underneath.


It's interesting to see you so sure of that when the scientists studying the data are not.

Even if that is salt and if it came from the ocean underneath, is the ocean still salty or did all the salt go to the top?

Science, for all being great, is extrememly self-limiting and harsh on conjectures. Sometimes it's ok to let the human common sense take over.

posted on Jun, 16 2019 @ 06:36 PM
link
Enceladus has geysers of underground ocean spurting its stuff. I bet if they looked for salt there they'd also find it.

Science, for all being great, is extrememly self-limiting and harsh on conjectures.


Conjectures are OK, if presented as such and not as facts.