A major incident has been declared by police as firefighters battle a huge blaze at a block of flats in east London.

Fifteen engines and around 100 firefighters have been called to the fire on De Pass Gardens, Barking, London Fire Brigade said in a tweet.

The force added the sixth floor of the block is currently alight.

Pictures showed part of the building engulfed by flames with black smoke billowing into the air.


Barking fire: major incident declared as huge blaze breaks out at a block of flats in east London 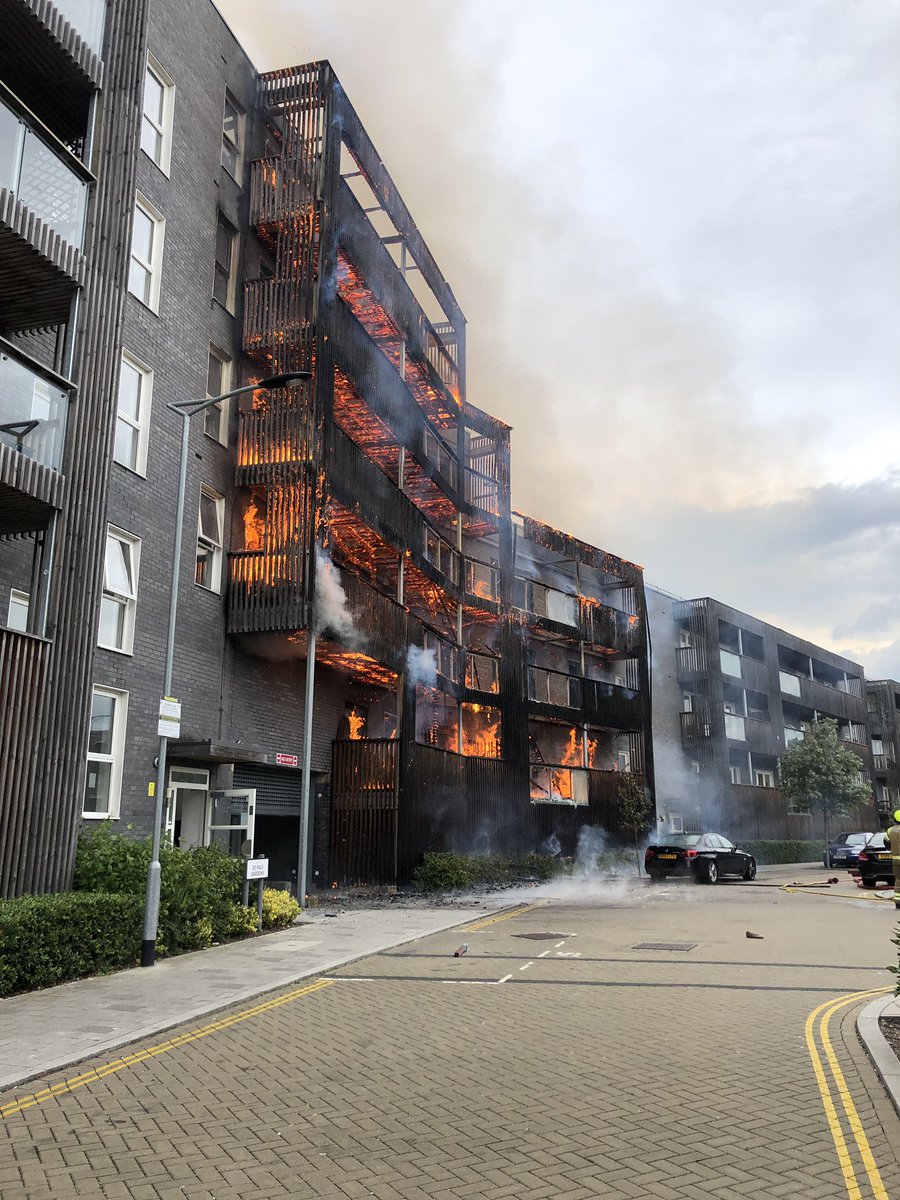 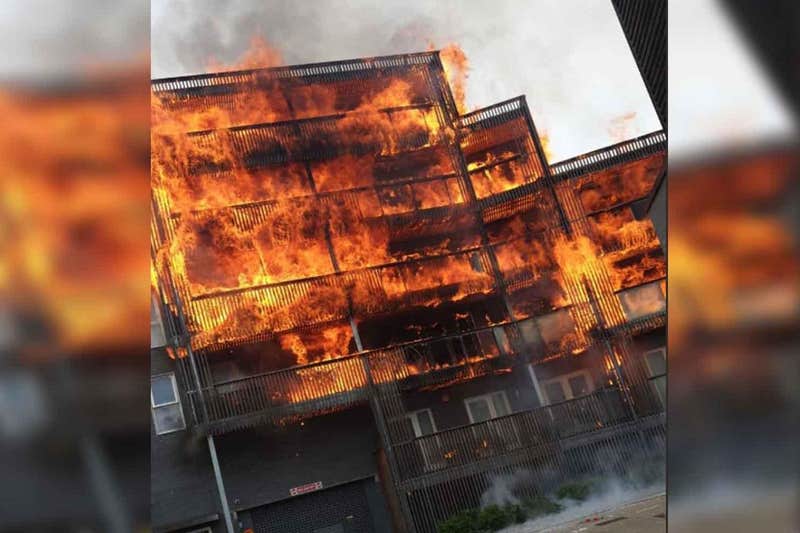 Oh dear, hope everyone is ok and Gods speed to the emergency services attending.

The cause of the fire is not known at this stage.

Edit: Looks like they have it under control now.
edit on 9-6-2019 by andy06shake because: (no reason given)

Whats up with the happy jazzy music in your video

I was thinking the same pal.

Not my video though, just what was current and available at the time.

posted on Jun, 9 2019 @ 02:56 PM
link
Somethings not right with this. The fire service do not hang around going to fires. The whole section ablaze when they got there? Fire propagation tends to go up from the start of the fire but this has spread sideways?
The fire was well ablaze by the time the fire service appeared. I'll wait for the "this block was built with flammable materials which was illegal" scenario. Followed by "we want compensation", followed by "we want houses not flats".
Am I being cynical meh.

I mean it has been known to happen, as unfortunate as the case may be.
edit on 9-6-2019 by andy06shake because: (no reason given)

originally posted by: crayzeed
Somethings not right with this. The fire service do not hang around going to fires. The whole section ablaze when they got there? Fire propagation tends to go up from the start of the fire but this has spread sideways?

That's what I thought when I saw the images.

Reading this confirmed my suspicions.

Resident Mihaela Gheorghe said she had "raised several issues" about the safety of wooden balconies on the blocks of flats.

She added: "I was in my fourth-floor flat when the fire started. We ran out. The fire brigade came but they found it hard to find a water supply at first."

"We said that one day a fire is going to happen.

"We raised several issues to the builder, the maintenance companies and the council about the safety of having all these wooden balconies."

Wooden balconies made that way are really a good way of spreading a fire sideways.

Edited to add that, apparently, only two persons needed medical attention because of the smoke.
edit on 10/6/2019 by ArMaP because: (no reason given)


Well, if the building method was not appropriate I suppose they are entitled some compensation, specially seeing that the builders had some problems of that kind in other buildings, according to this.

Peter Mason, chair of the Barking Reach residents’ association, told the Guardian that in early May he contacted the builder Bellway Homes to ask for the fire risk to be investigated after BBC Watchdog broadcast claims of fire safety problems at two other developments by the same builder.

The fire appeared to rip through the wooden cladding around the balconies of the building and may have been caused by a barbecue being lit on one of the balconies, Mason said.

On the video below we can see that balcony cladding was completely destroyed and the window frames were also of wood, so they probably spread the fire from the balconies to inside the apartments.

Somehow I'm thinking our construction techniques leaves a lot to be desired. Lowest bidder scenario probably also contributed to the materials used but you would think they would have learned there lesson by now, because if that was vertical they might not have been able to control the blaze.

I think that, sometimes, the architect's ideas are not really translated into real world situations.

If the image below is from one of those apartments (found here), then it shows that the balconies were all covered with wood. Yes, it does give a nice, cosy feeling to the balcony, as does the wooden window frames, but if the wood does not get a fire retarding treatment and, worse and likely to happen, gets a coat of varnish, either by the builder or the owner (highly likely), those balconies turn into a dangerous fire hazard. 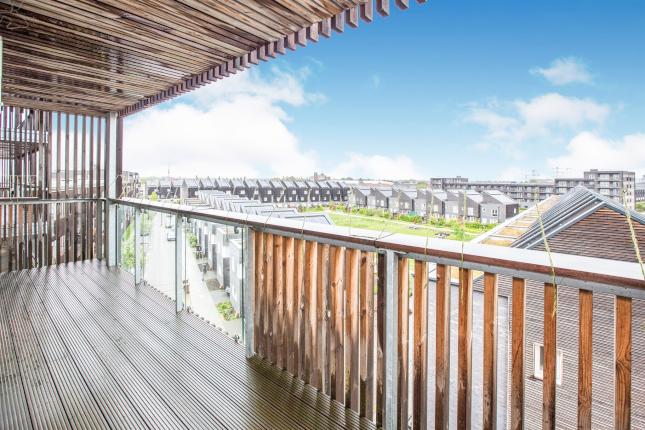 The BBC Watchdog Live article they talk about (here) states that they found that, in several cases, the fire protections were there but badly done, so it looks like there's a problem with the builders not supervising the construction and getting a final result that is not according to the law and could result in the death of the people on those homes.

It looks like the legislation exists but not the enforcement, so while a building is supposed to be built according to the law, nobody checks if that's true or not.

Today, in Portugal, anyone selling a home needs to present an "Energy certificate" showing the energy class of that home, similar to what we see on a refrigerator or other home appliance, but related to how much it will cost to keep the home at the right temperature. Those certificates have to be signed by a certified engineer. As far as I know we do not have the same regarding fire security, and I don't know if there is any thing like that in the UK, but I think an independent assessment and certificate of fire security before any sale would help avoid situations like this.

Well it's looking like they were already ""downplaying"" the resident safety fears and concerns.

I certainly agree where certificates certified by trained professionals is concerned but that will/would equate to more monies i imagine hence less profit in the end.

The problem is that when nobody checks we cannot know if things are OK or not.

I know a case of a building for which the builder contracted an electrician to do the whole electric work. The electrician was paid and things looked normal, but when the apartments were sold people complained that they didn't have electricity anywhere. When they looked at the problem they found that the electrician had only put some half metre of wire at the ends, so although there weren't any connections made it looked fine. The builder, as expected, never saw that electrician again and had to pay another one to do the job.

posted on Jun, 10 2019 @ 11:03 AM
link
Does nobody see the problem with this? I'm a carpenter, handled wood all my working life and I can tell you wood does not self combust. In fact to get a fire started on one of these balconies is no mean feat. Ok, when a fire takes hold it would spread quickly to the other balconies but to get it started to do that you would need excelerants and time, both of which are dodgy.

Don't you think an accident with "a barbecue being lit on one of the balconies" could do it?

Aye, there are indeed some dodgy spurious tradesmen about, but that's always been the nature of the building trade.

Some of the things people have not done, forgot to do, or just could not be arsed, is beyond contempt really.

Fact is if you don't check their homework, then the dogs apt to have eaten it, especially on a Friday afternoon. LoL

posted on Jun, 10 2019 @ 12:09 PM
link
a reply to: ArMaP
No I don't think so.Think about a barbecue, even if they tipped it over wood would not just set alight. There would have been enough time to throw a bucket of water over it.
You want me to come right out and say it? I think it was arson. For one reason or another one of the occupants started it.
Think of the other occupants, old, disabled and families, yet they all got out unharmed except one couple that were slightly injured. that's 30 flats say with 2 people per flat ,that's at least 60 people some not in good health. Just to raise the alarm to all those flats and to get everyone out takes time. ??????????

originally posted by: crayzeed
a reply to: ArMaP
No I don't think so.Think about a barbecue, even if they tipped it over wood would not just set alight. There would have been enough time to throw a bucket of water over it.


I was thinking about a barbecue and lighter fuel.

You want me to come right out and say it?

I think it was arson. For one reason or another one of the occupants started it.


I thought about that possibility too, and could even be someone from outside the building, although less likely, as that wood cladding starts close to the ground, as you can see on the photo below. 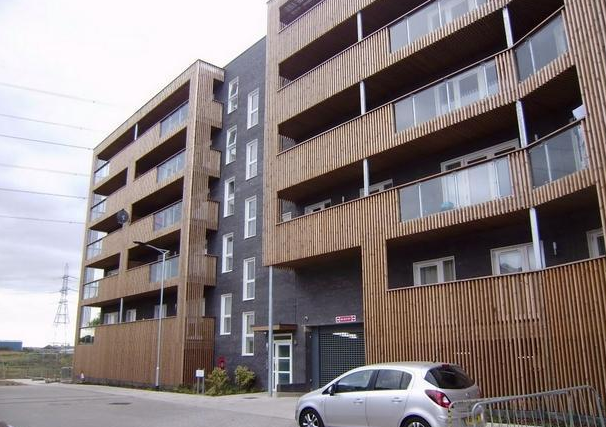 PS: I got that photo from this article, where they say the wood used on the cladding was more combustible than it should be.

here is a y-tube search for just the idiots that can trigger such fires :

Aye, there are indeed some dodgy spurious tradesmen about, but that's always been the nature of the building trade.
Some of the things people have not done, forgot to do, or just could not be arsed, is beyond contempt really.
Fact is if you don't check their homework, then the dogs apt to have eaten it, especially on a Friday afternoon. LoL

who was jailed for taking back handers from builders and suppliers, if I

had so many problems that they came down within five years or so.

Aye, they bastard councilors/politicians certainly have a finger in many a pie.

Backhanders are still the colour of the day, at so many a level, their accountants are simply somewhat better equipped to hide and disguise their assets these days.

Canny understand why anyone thought that multistorey highrise social oblivion nightmare monstrosities were ever going to be a good idea, and they got worse as they kept on building them ffs. LoL