The establishment finally went balls to the wall and decided to arrest him, based on..... Well, it appears nothing. Now the man the state HATED is somehow, unexplainable, miraculously ill. So I'll in fact, he can't TALK.

Let that sink in my conspiratorial friends. The man the state wanted dead is dying. Strange no?


Assange Is Reportedly Gravely Ill, And Hardly Anyone’s Talking About It

Does no one else find this..... peculiar?

posted on May, 29 2019 @ 03:37 PM
link
Someone may be having him poisoned so he does not release the best stuff he has. I think they are using this as a threat so he hands over everything he has left.

This isn't a shock.

I hope like hell he has a dead man switch.

Something like that should be given to the heads of Iran and Venezuela.

originally posted by: rickymouse
Someone may be having him poisoned so he does not release the best stuff he has. I think they are using this as a threat so he hands over everything he has left.

Maybe, they have the antidote/cure and could provide if ?????

If he miraculously, suddenly recovers it would be interesting.

I lost count on the number of times Julian was supposed to be dead so won't lose any sleep over this report.

I must admit I was shocked at his appearance when I saw the video of his removal from the embassy he had been holed up in. It physically was a shadow of his former self. Then again, 7 years or so alone in a room or maybe two, might do the same to a lot of people.
edit on 29/5/19 by LightSpeedDriver because: Typo

The 4th Reich always preferred use of slow poisoning with almost no detection of trace elements .

Newsflash: Man documented for being a fan of unprotected sex with relative strangers falls ill.

The only conspiracy here is how, in 2019, a man allegedly as wise and clever as Julian Assange apparently doesn't know about the HIV, Syphilis, Chlamydia, Gonorhea, Super AIDS, Hepatitis, or any of the other lovely diseases that go along with running around in acid rain without your rain jacket on.

Good job , you solved the case.

Following the arrest of WikiLeaks founder Julian Assange today, Breitbart News has decided to flash back to allegations from October 2016 in which Hillary Clinton suggested that the U.S. government drone strike Assange.

Did she actually suggest it. Well it certainly came up here on ATS. Well Hillary denies Jokingly making such a remark...
Not even Snopes ( a publication I've learned to distrust... ) can either prove or disprove. www.snopes.com... 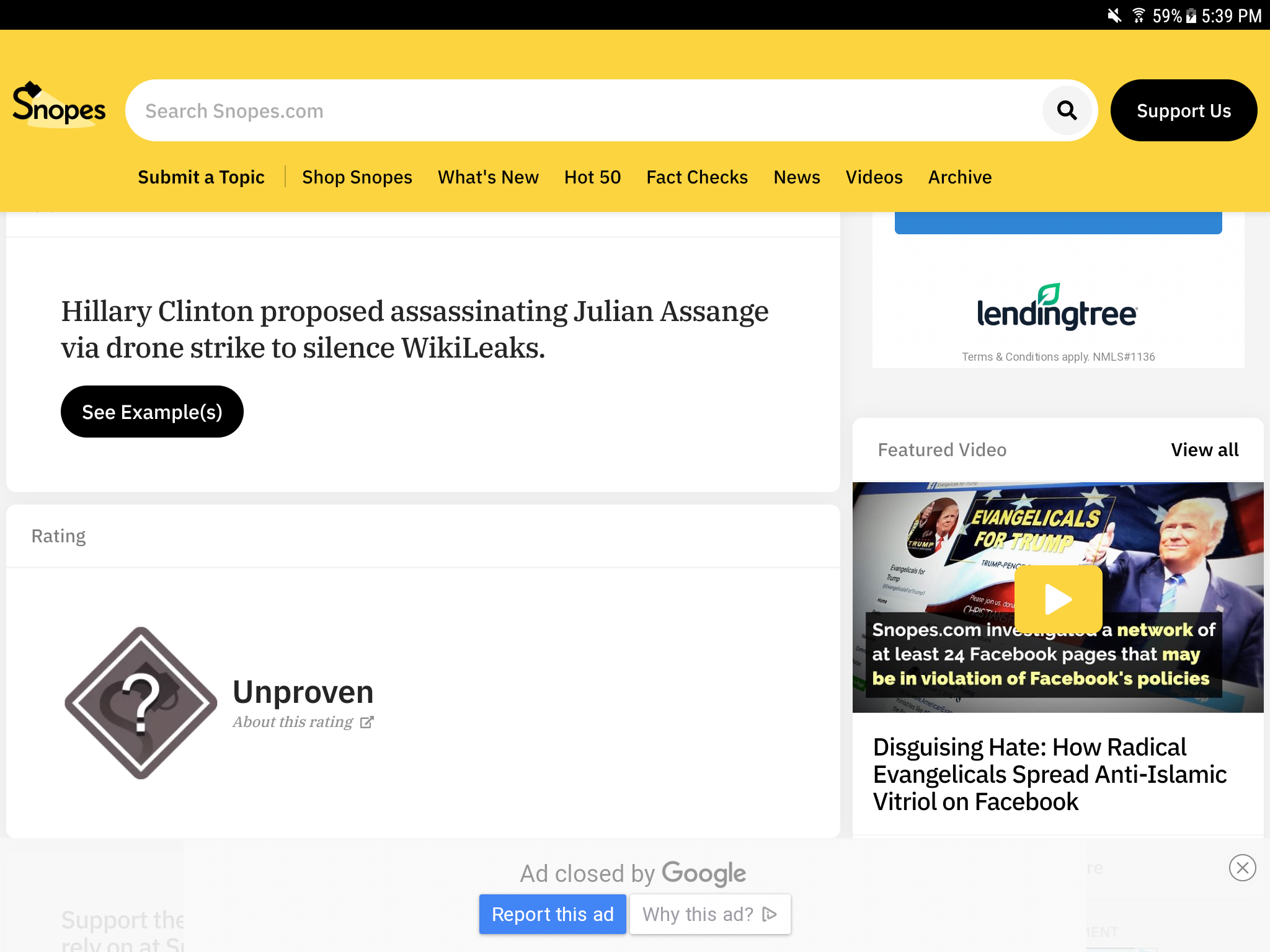 He's probably just severely depressed. It can be just as devastating to a person's wellbeing as any physical illness.

And let's face it, it wouldn't exactly come as a surprise... considering how he looked and was behaving when they pulled him out of that embassy.

posted on May, 29 2019 @ 04:50 PM
link
or its the fact that stress and improper nutrition has a way of taking a toll on the human body and that certainly fits his past few years.

Nah..its the man trying to kill him.

posted on May, 29 2019 @ 04:52 PM
link
Like Jack Ruby. Give him a shot in jail so he never spills any bad government beans again. The truth hurts and governments will kill to prevent it from spreading.

The reality is that he is to high profile for an obvious poisoning and why go to all of that bother and make a bigger martyr out of him. They will convict him and he will rot away in a Super Max like Florence . Its really the easier way to go and if they follow due process (even if the base charges are bogus) then the hue and cry will go away and he will be more or less forgot. You kill him and his message will develop a life of its own.

If he passes I hope I am proved wrong but not betting on it. If he is actually being eliminated it most likely means there is no risk via an insurance file.

originally posted by: FredT
a reply to: Joneselius

I'll go ahead and say once someone starts smearing their own poop on the walls of the room they're staying in rent free and takes steps to expose their host's offshore financial agreements purely to spite that host who are keeping you away from the authorities as a favor, there's no "could be" involved there. Assange is batcrap nuts.