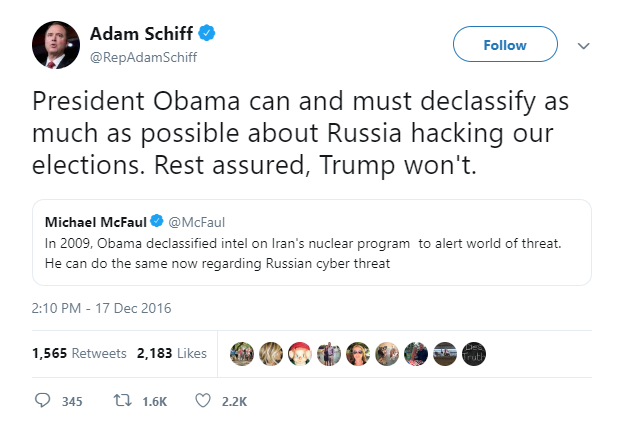 Sorry I have to post this again just to highlight the absurdity of the whole thing.

That is correct..I am pretty anti MSM on the whole, it's all agenda driven. However the liberal media has taken it to a level that is simply destructive. Deep State Pawns...but, that's what they want. Still pushing that dead 2020 plan. USA+Russia = the deep state lost.

Why won't that Pedo shut up already..

I want to see him and Adam Gase (NY jets coach) in a staring contest!
edit on 28-5-2019 by Sabrechucker because: edit

posted on May, 28 2019 @ 12:33 AM
link
a reply to: mtnshredder
When hate and fear take precedent over "intelligence", that person is dangerous. That's why they have to be served justice ASAP.

Care for the win

Damn, Grassley and Graham are on it!

4. Did anyone instruct, request, suggest, or imply that you should send yourself the aforementioned Inauguration Day email memorializing President Obama’s meeting with Mr. Comey about the Trump/Russia investigation? If so, who and why?

12. Did President Obama have any other meetings with Mr. Comey, Ms. Yates, or other government officials about the FBI’s investigation of allegations of collusion between Trump associates and Russia? If so, when did these occur, who participated, and what was discussed?

Public Laundromats and corporate cleaning services are getting memos of recommendation to switch over to Arm&Hammer Detergent (powder preferred) ......

The Senate Judiciary Committee has a constitutional duty to conduct oversight of the FBI and the broader Department of Justice. Part of that duty involves ensuring that law enforcement efforts are conducted without improper political influence. Accordingly, the Committee has been investigating the FBI’s relationship with Christopher Steele during the time his work was funded by Hillary for America and the Democratic National Committee, as well as the FBI’s reliance on his unverified third-hand allegations in the Bureau’s representations to courts.

As part of that effort, the Committee sent a request to the National Archives for records of meetings between President Obama and then-FBI Director Comey regarding the FBI’s investigation of allegations of collusion between associates of Mr. Trump and the Russian government. In response, the Committee received classified and unclassified versions of an email you sent to yourself on January 20, 2017 – President Trump’s inauguration day. If the timestamp is correct, you sent this email to yourself at 12:15pm, presumably a very short time before you departed the White House for the last time.

In this email to yourself, you purport to document a meeting that had taken place more than two weeks before, on January 5, 2017. You wrote:

On January 5, following a briefing by IC leadership on Russian hacking during the 2016 Presidential election, President Obama had a brief follow-on conversation with FBI Director Jim Comey and Deputy Attorney General Sally Yates in the Oval Office. Vice President Biden and I were also present.
That meeting reportedly included a discussion of the Steele dossier and the FBI’s investigation of its claims.[1] Your email continued:

President Obama began the conversation by stressing his continued commitment to ensuring that every aspect of this issue is handled by the Intelligence and law enforcement communities “by the book”. The President stressed that he is not asking about, initiating or instructing anything from a law enforcement perspective. He reiterated that our law enforcement team needs to proceed as it normally would by the book.

From a national security perspective, however, President Obama said he wants to be sure that, as we engage with the incoming team, we are mindful to ascertain if there is any reason that we cannot share information fully as it relates to Russia.

The next part of your email remains classified. After that, you wrote:

The President asked Comey to inform him if anything changes in the next few weeks that should affect how we share classified information with the incoming team. Comey said he would.

It strikes us as odd that, among your activities in the final moments on the final day of the Obama administration, you would feel the need to send yourself such an unusual email purporting to document a conversation involving President Obama and his interactions with the FBI regarding the Trump/Russia investigation. In addition, despite your claim that President Obama repeatedly told Mr. Comey to proceed “by the book,” substantial questions have arisen about whether officials at the FBI, as well as at the Justice Department and the State Department, actually did proceed “by the book.”

In order for the Committee to further assess the situation, please respond to the following by February 22, 2018:

Did you send the email attached to this letter to yourself? Do you have any reason to dispute the timestamp of the email?

When did you first become aware of the FBI’s investigation into allegations of collusion between Mr. Trump’s associates and Russia?

When did you become aware of any surveillance activities, including FISA applications, undertaken by the FBI in conducting that investigation? At the time you wrote this email to yourself, were you aware of either the October 2016 FISA application for surveillance of Carter Page or the January 2017 renewal?

Did anyone instruct, request, suggest, or imply that you should send yourself the aforementioned Inauguration Day email memorializing President Obama’s meeting with Mr. Comey about the Trump/Russia investigation? If so, who and why?

Is the account of the January 5, 2017 meeting presented in your email accurate? Did you omit any other portions of the conversation?

Other than that email, did you document the January 5, 2017 meeting in any way, such as contemporaneous notes or a formal memo? To the best of your knowledge, did anyone else at that meeting take notes or otherwise memorialize the meeting?

During the meeting, did Mr. Comey or Ms. Yates mention potential press coverage of the Steele dossier? If so, what did they say?

During the meeting, did Mr. Comey describe the status of the FBI’s relationship with Mr. Steele, or the basis for that status?

When and how did you first become aware of the allegations made by Christopher Steele?

When and how did you first become aware that the Clinton Campaign and the Democratic National Committee funded Mr. Steele’s efforts?

Did President Obama have any other meetings with Mr. Comey, Ms. Yates, or other government officials about the FBI’s investigation of allegations of collusion between Trump associates and Russia? If so, when did these occur, who participated, and what was discussed?

Thank-goodness for social media. If the citizens of this planet had to rely on their country's Mainstream Media for information, Hillary would be President, and Europe would be back in the dark ages.

I don't like Social Media or the MSM, although I understand what you mean. What a horrible day it would be if we all had to meet in person and...Dare I say..Talk in person. The millennial's would run out of pampers faster than a Miami day care!


Unmasking by U.S. intelligence agencies typically occurs after the United States conducts eavesdropping or other intelligence gathering aimed at foreigners or foreign agents, and the name of a U.S. citizen or entity is incidentally collected.

Intelligence reports are then disseminated within the U.S. government, with such names masked to protect those U.S. citizens from invasion of privacy. The names can subsequently be unmasked upon request by authorized U.S. government officials under certain circumstances.[1]

WHY would America's UN Ambassador do this?

Sadly, I still don't understand what he meant...or Susan Rice for that matter.
edit on 5/28/2019 by carewemust because: (no reason given)

I think Mueller was the only investigator who was NOT ignored by witnesses. They responded to all of his questions.

Congressional questions and requests seemed to be totally ignored when Republicans ran the House, just like they are now that Democrats run the House.

Hopefully Barr's prosecutors are having the same success with witnesses that Mueller had.

originally posted by: carewemust
a reply to: mtnshredder
When hate and fear take precedent over "intelligence", that person is dangerous. That's why they have to be served justice ASAP.


You have to be dead inside to do the things they do anyways don't ya?

Oh yeah, well you people and your Pedophile Derangement Syndrome will be triggered to high hell once Biden landslides teh POTUS seat in 2020.