posted on May, 22 2019 @ 07:11 PM
link
Alien conspiracy theorist Scott Waring made a YouTube clip on May 19 about this strange colored anomaly on Mars. He states that a man named Terry Franklin discovered it and sent him an email about it. I'm not going to post Waring's YouTube clip, because he's claiming this anomaly is an alien craft, that left scorch marks on the ground. Even though it's a peculiar looking object, I doubt it's a crashed UFO. 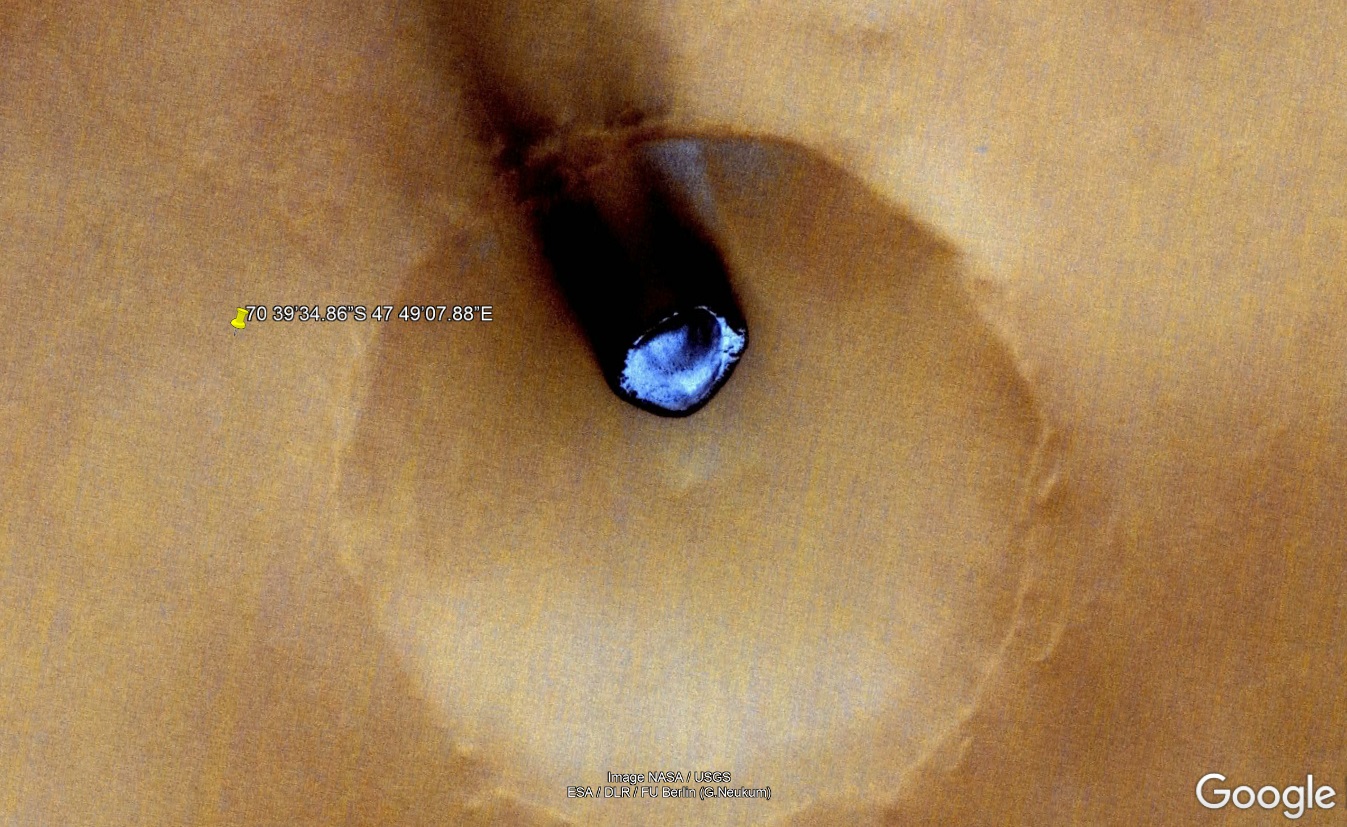 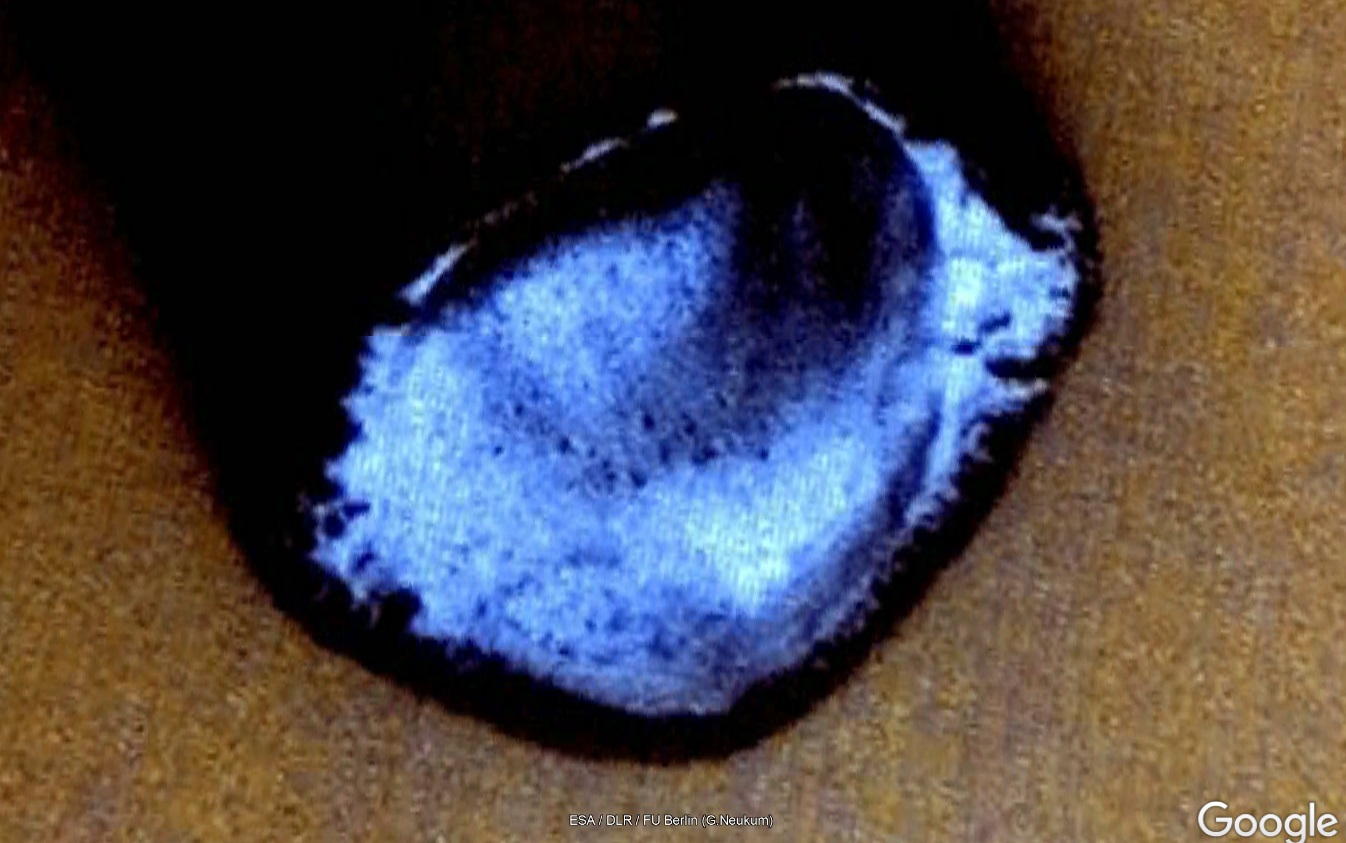 Waring calculated that this anomaly is over 1 mile in diameter. He also states that the darkened area might be burn marks, which he thinks are obvious signs that it's a crashed craft of some kind. The rough edges around the object, makes him think that it could be a “biologically-grown spaceship.” Then he speculates that the blue colored anomaly might be just a blue light radiating from an underground base. So, what is it going to be Scott? LOL

“This is a UFO that has crashed into a crater on Mars”, Waring pointed out, depicting the enigmatic blue object as a thick disc spacecraft. It is no less surprising, he said, that no one at Google has even edited it out, going on to express his bewilderment at the “burn and scorch marks” that the object features when the compass is rotated – the “sure signs” of something having “crashed here”.

Waring is meanwhile pinning hopes on an edge to this blue disc finally showing itself one day, enthusiastically suggesting that the unidentified object is a “biologically-grown spaceship” due to its rough edges resembling something organically grown.

“I could be wrong but to me the blue light area looks like light coming up from a huge hole of an underground base rather than a disc but I’d bet many UFOs go in and out of it. Looks awesome whatever it is”, one astonished viewer commented, while another butted in noting it could be “a traveling object in the Martian atmosphere caught in the satellite picture just at right time.”

Yeah Scott, I think you're wrong and I think your tin cap is overcharged. The dark area is probably a shadow, which means that this is might be a structure of some kind, perhaps a crashed asteroid. Then again, it could be a strange colored gas that is being emitted from this location. What it is, is anybody's guess. So, what are your guesses?

well, google mars is black and white or infra red from my house...so theres that

posted on May, 22 2019 @ 07:23 PM
link
It could be something incredible and exciting, however I think it's more going to be a mapping glitch... After all, Google does occasionally generate the odd error.

Like the famous giant pliers from space that attacked West Bromwich here in the UK...

posted on May, 22 2019 @ 07:29 PM
link
Well, the guesses by the presenter are idiotic, but that is very interesting if a legit pic ... the amount of seemingly legitimate anomalous features on Mars is too vast to retain, even forgetting the ones that are obvious reaches or b.s.

Strange as it seems, I've come to think the evidence for not just life but intelligent inhabitants on Mars sometime in the past is pretty solid, despite the hyperbole. Brandenburg's findings of artificial fission residue on Mars is fairly sound as far as this laymen can tell, and some of the features sure do look like ruins.

This instance may not be a sign of intelligence, but it sure is hard to guess what it might be. Meteorite? Volcanic? What gas burns blue? Methane? And methane on Earth is a sign of what?

Edit: Thinking about it, if film, an errant cigarette or burning cherry left on the negative might make the most sense, though the above mentioned stitching artifact is possible, too... though overused as the goto answer to any weird features found in the Sol system, imo.

And thinking harder, no actual film has been used to view Mars close up as nothing has been physically recovered from Mars orbit (to our knowledge!), but was any digital data moved to photographic film or presented on film?

I am pretty sure it is a defrosting dune. Great post. 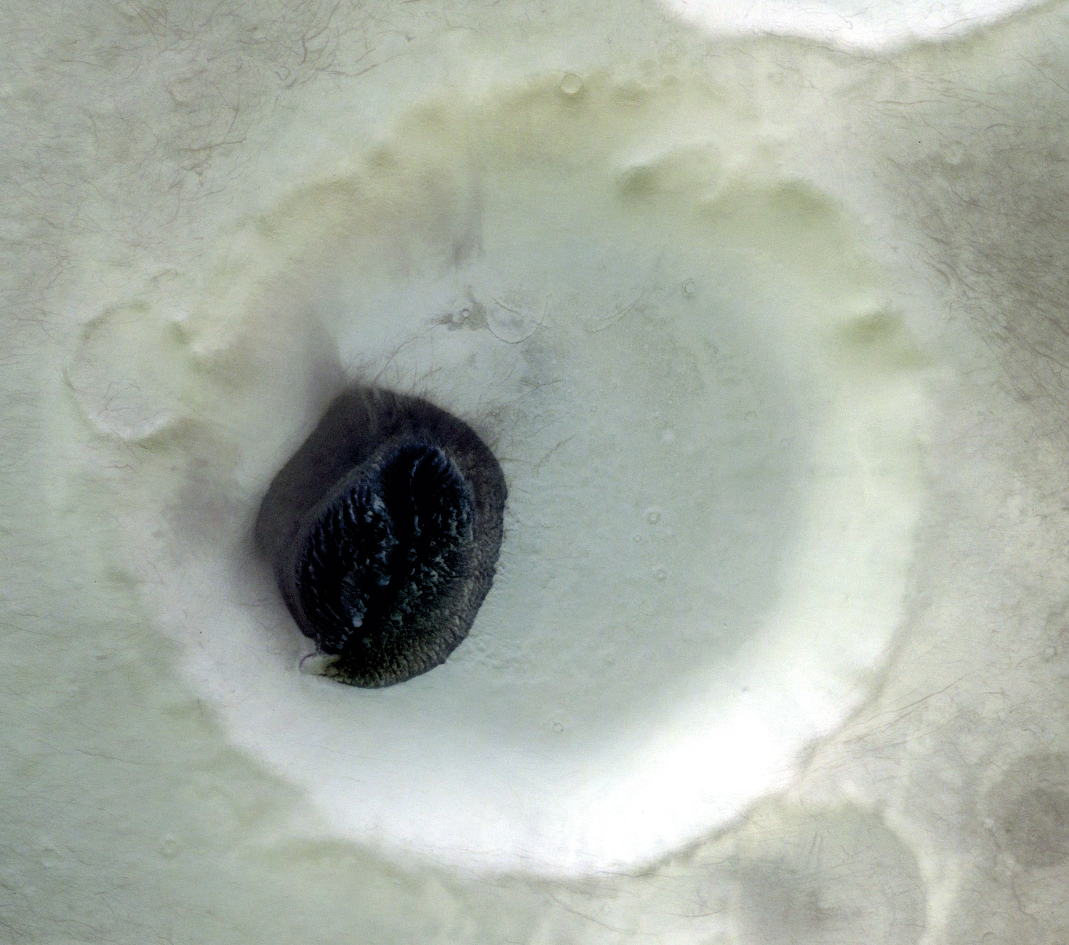 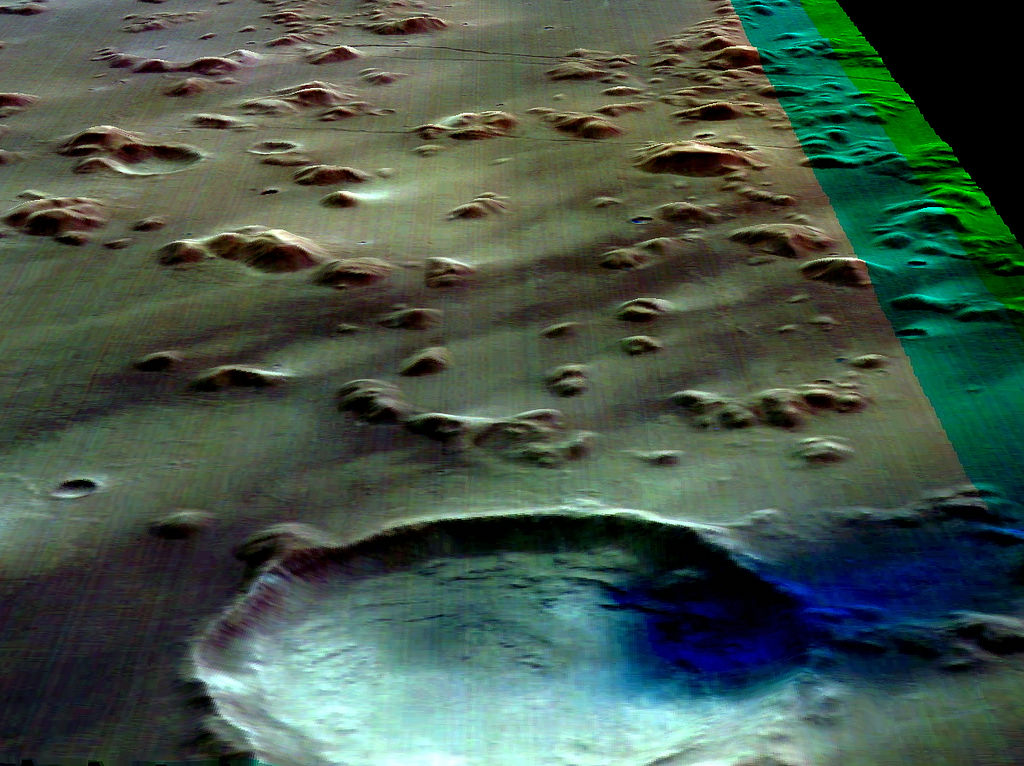 They often form in craters. 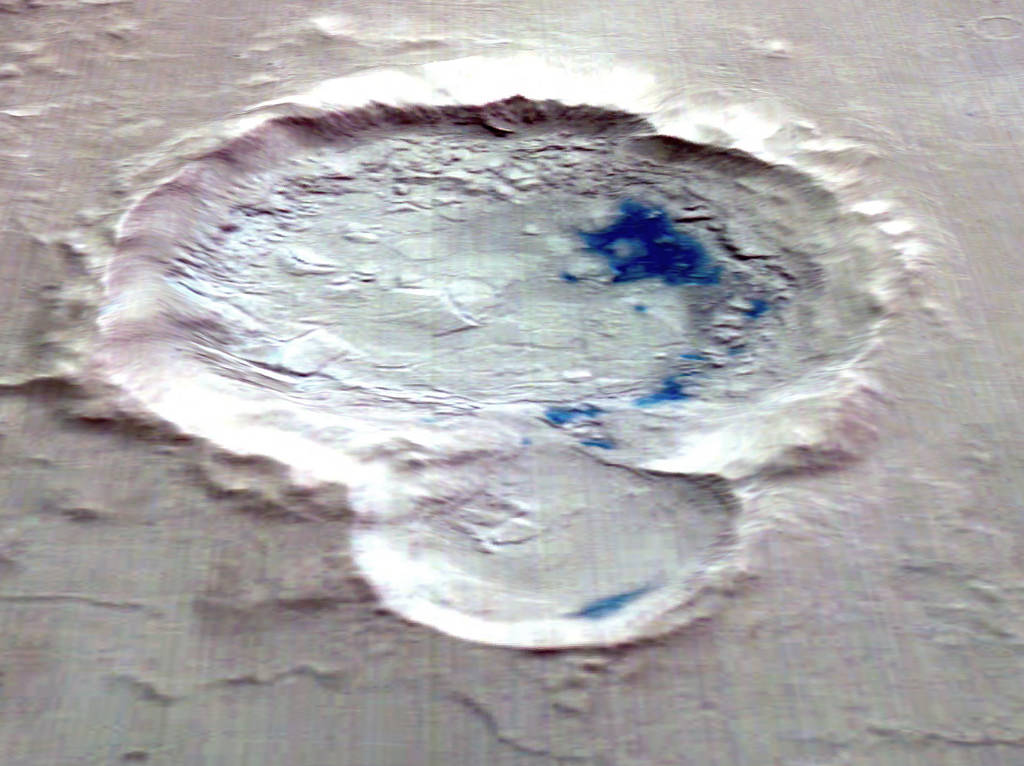 
It's a crashed ship that covers the hole that the martians come out of...

ETA: my wife just said it's a blue light special from Kmart
edit on 22-5-2019 by thedigirati because: cause the wife looks good in a mini skirt

A crashed spaceship in the door??

Eh, the thawing of a crater seems more likely...if not quite as cool.


If you notice, one of those pics above indicate alot of wind blowing. Imagine snowdrifts here on Earth in colder climates. Snow piles high then melts.

If he is saying its aliens then...I'm just sayin??

Regardless, someone else with photoshop can take out the “shadows” and adjust the color/contrast/hue/clarity. When they do, you’ll see that the crater definitely has something in it and that black streak is no shadow/charred earth. It’s just an overlay.

Pretty sure this is a recon photo that displays some ruins they don’t want you to see. Again, don’t mess with filters - actually adjust the image colors and then you can modify the clarity/shadows/etc. a bunch to get a much better look.

I can tell you this - the lip of the crater under the black steak is very un-disturbed for a mile wide object... as is the wall of the crater...

Maybe the blue is ice and the dark is moisture?

But interesting symbolism, Blue anomaly in the Red planet.

posted on May, 23 2019 @ 03:44 AM
link
My first question would have to be is this image real color or somebodies interpretation/modelling? Does Google have satellites around Mars? The only color images I remember seeing have come from NASA rovers, which is questionable all by itself. It does resemble a meteor in the middle of a crater, but it's also not centered so Idk.

The only way I could upload pictures was to covert them to .gif

Martians writing their names in the snow?

posted on May, 23 2019 @ 12:03 PM
link
So TPTB still haven't learned to screen these images before they get released to the public?