I Can't Quote the Gods


A few days ago a thread was posted inviting members to compare the relative merits of the gods. One of the verses seemed quite unbeatable. So I ran through a list of gods and goddesses looking for a quote that could compare.

I was shocked to realize that I couldn't remember a single instance of a god or goddess actually speaking words to me. Just a very slight change in facial expression, a slight nod, a little extra glow.

Other than that, looking very carefully at certain memories, was like looking at still life portraits, or even like being part of a diorama; no movement, no action, no dialog. A frozen moment.

It may seem sad to realize that the gods can't be quoted in words. Well maybe someone can; not me anyway.

So when you catch me quoting the gods, I'm probably quoting another person or just making it up myself.


I would have been born within sight of the Pacific Ocean if that mountain wasn't blocking the view from that house. It was only 6 miles as the California Condor flies.

Something that I always felt like throwing in to a thread: When I was in 3rd grade, a girl came out West from Wisconsin with her family in a covered wagon pulled by two great draft horses, and lived in the house next door. That makes me sound really old.

But in 5th grade we skated together holding hands in a roller rink to the music of:

But since that song came out in 1966, that blows the whole really old guy mystique away.

But anyway, she said to me "Your hand is really wet and slippery."

Well you know how when a guy reaches a certain age, holding a girl's hand isn't quite as nonchalant and casual as it used to be.

So on to the main story:

As I was searching through the motionless still lifes and dioramas of my memories I came across this memory full of live action.

It was October 17, 1989, a couple of hours before the Loma Prieta Earthquake, sometimes referred to as the World Series Earthquake on account of the Oakland Athletics and the San Francisco Giants were playing in the first cross-town World Series since 1956.

I was at Carpinteria State Beach with a church group. I looked out to sea and saw 2 1/2 foot waves, breaking not too far out. There were some kids who didn't know how to body surf, so I say, "let's go, I'll teach you how."

Four of the kids went out with me and I showed them the best time in the cycle of the wave to kick off and catch a wave. "It's easiest if you're able to get a good kick off the sand. Move a little bit in or out depending on where it looks like the wave will break."

The kids didn't enjoy it as much as I did so they went out to hang with the grownups. The waves were all mine then!

Or so I thought.

I'm riding a wave and glance to my right, and four feet away, I see what looks like a dog. Sometimes when you get really startled it's almost like fear. So after coughing up the salty water that I inhaled I looked again and saw it was a sealion sharing the wave with me. 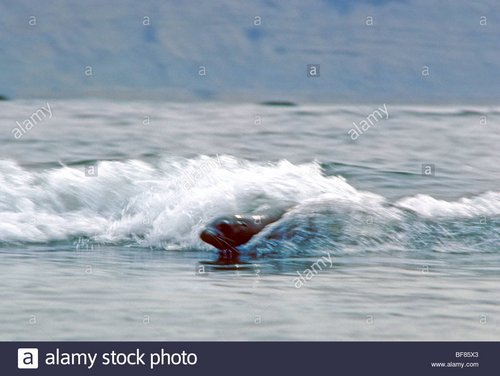 The waves were higher than in this picture, but this one better captured how much of the sealion was visible from my point of view.

A delightful read! I really do enjoy reading your creative and thoughtful posts.

And count me in as someone who did a horrified double take at a dog/seal (in this case I saw one swimming waaay out in San Francisco Bay and was sure the poor thing was about to drown! lol.)

I really enjoyed this quote


So when you catch me quoting the gods, I'm probably quoting another person or just making it up myself.

But were you horrified enough to cough up salt water?

I remember someone selling salt water taffy in San Francisco.

I shouldn't laugh. Milk might come out my nose

I was body surfing off Kaanapali Beach on Maui, and I realized I was way too close for comfort to a humpback whale! I almost had a heart attack! My heart was pounding out of my chest as my arms and legs were taking me to shore on their own accord. That was the time my arms and legs had a mind of their own! 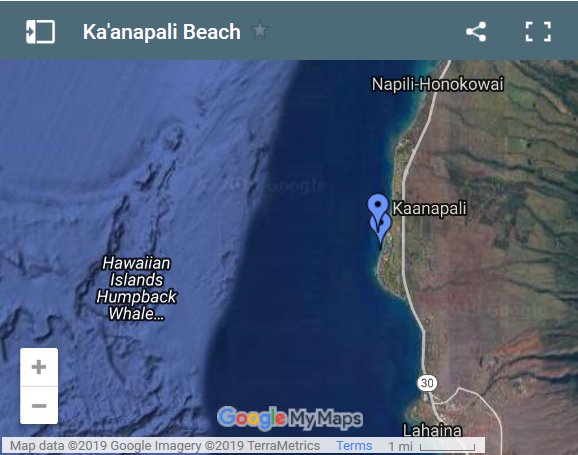 According to this map, it seems that the whale is still out there...


Almost two-thirds of North Pacific humpback whales (estimates range from 4,000 to 10,000 whales) migrates to Hawaiian waters each winter to bear and nurse their calves and to mate, although not to eat. Their throats are only the size of a large dinner plate or a volleyball. While in Alaska they spend a majority of their time eating, feeding mainly on krill. They can cover nearly 3,000 miles (4,800 km) of open ocean in less than two months' time. This population is growing an estimated 7% per year, but is still greatly diminished from the estimated 15,000 to 20,000 in the days before the whaling ban.


To increase public support, the sanctuary essentially incorporated existing protections without additional measures. Those restrictions primarily dealt with approach and harassment, waste discharge, and alteration of the sea bed. The prohibition on waste discharge had a significant exception: boaters could obtain permits to discharge waste inside the sanctuary, as most have continued to do.