It's a practical canned meat product though. It had its origins as a war-time ration. Very practical. I can just imagine the troops getting air-dropped some Spam crates, and that would be a good day for everyone.

Canned water sounds very bizarre and amusing at first. It just sounds like one of those things that shouldn't come in can form. But again, very practical.

Anyone who grew up in the 90's may remember the canned bread joke on Spongebob. But now we're entering the less-than-practical territory. Because canned bread is actually a thing and I just can't even imagine why this is worth keeping around the house. Is this another depression era/ wartime treat? 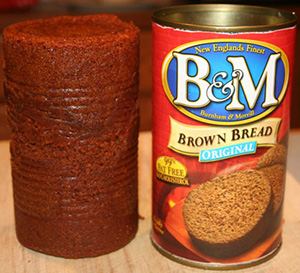 Then my friend told me about how his grocery store used to stock a canned--ready for this?--canned, whole chicken.

I had to look it up for myself.

Isn't that the most horrifying thing you've ever seen?! Like why? WHY?! WHYYYY 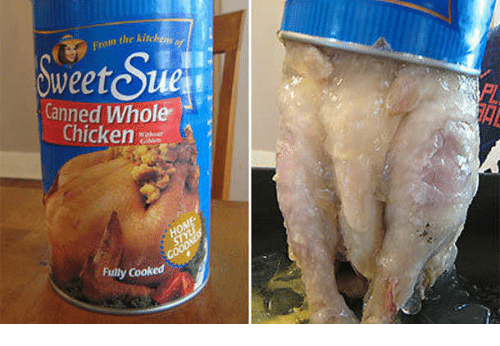 posted on May, 21 2019 @ 10:44 PM
link
I’ve been hungry before, any of these fine caned goods would be welcomed. Maybe it’s not what comes out of the can, but how you season and prepare it. I think we’re a bit spoiled in the first world. Good post

Too true. I am definitely showing my first-world snobbery here.

I have it pretty good compared to a lot of the world.

For example, in Soviet Russia, canned fish eats you! 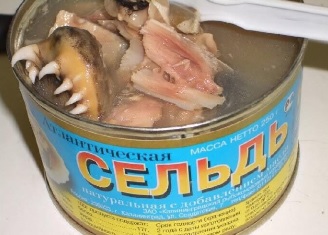 That chicken's not for eating. 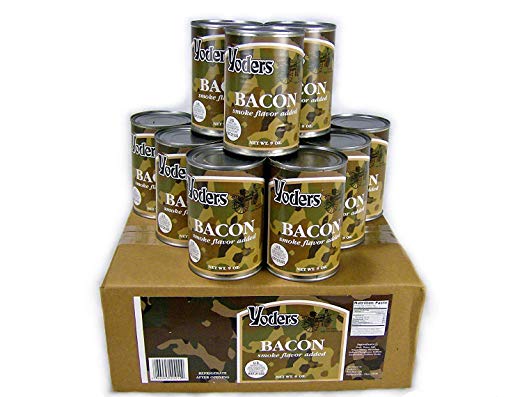 posted on May, 21 2019 @ 11:36 PM
link
Actually, those canned chickens made good soup. We were stocking and rotating the canned whole chickens back many years ago, but now we buy the grabill canned chickens, they are good. The beef is good too, haven't tried the pork at all. They are great for camping. grabillmeats.com...

I buy them by the case of twelve right from the company, the shipping brings up the price to over eight bucks for the twenty seven oz cans. I have to reorder, the daughters and granddaughter usually get some when they are over, down to three cans of chicken. I do not know how much they have gone up in the last year and a half either.

originally posted by: NarcolepticBuddha
Anyone wanna talk about the 'prepper' section of Amazon?

I should order a case of that canned bacon for our blind cat. He has eaten all of our bacon up, we had ten pounds in the freezer a month ago. He eats over half of the pound when we take it out, in fact, I only got two slices off the half pound I made yesterday morning, and it is all gone. His fur is nice and soft though when he eats bacon.

this is the current useage in the UK

in applications where - store and forget durability and longevity is required

My wife likes this canned delicacy. 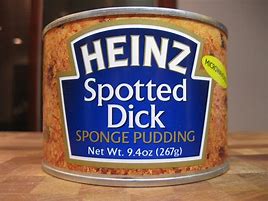 (Note - I just crack up at this video, too funny).

And NO...I have not tried it (or smelled it). It's gotta' be rough though!

My dad used to get some of that Norwegian rotted fish years ago when I was a kid. I did eat it, so did he and my uncles. It taught me to appreciate good food that was fresh.

posted on May, 22 2019 @ 01:28 PM
link
Twighlight zone, season 3 episode one.
An episode with Elizabeth Montgomery and Charles
Bronson. Titled “two”.

That was the first time a saw chicken in a can.

Bronson searching for food found it on a shelf.

I don't think beer should come in can form but it does.


Oh and try browning the spam in a frying pan. The caramelization adds to the flavor.
edit on 5222019 by Sillyolme because: (no reason given)

I have never even seen that in the grocery store and I am from NY where they sell everything.
It sounds like something you go to the clinic for.

Aint nobody making that chicken into a palatable meal.
Maybe pet food.

Calcium.
I leave the bones in when I make salmon cakes from canned salmon.

As long as he's got his bacon a country boy can survive.

I'm thinking it would need crisping up.

I'd set up surveillance. The cat obviously has an accomplice.