My reason to walk away

It's a believe it when we see it debate then, isn't it?

Based on patterns of history and my inabilities to forget such trivial things so easily, it's my opinion that the walked/walking away is much like the common New Year's Resolution... heavily viewed by the scope for action to change, yet come mid January we'll be right back to being told what others are doing wrong for us.

Change and action is self initiated, which is why a proposed plan of action for personal concerns while ranting is not only warranted... it's imperative.

Marx's criticism of capitalist economics and social / political life is quite clear, and well known. What is your actual rebuttal beyond the fact it was an economic and political tool used by dictators.
edit on 20-5-2019 by strongfp because: (no reason given)


What is your actual rebuttal beyond the fact it was an economic and political tool used by dictators.

Read that outloud to yourself and then get back to me.

I know you have a hardon for Karl Marx and communism. So I'm just going to assume you don't get the irony of your own posts.

Walk away - this is an act of abandonment. This is the plan.
Any questions?

This has been explained to him many times.

But he wants to fill the pages with his own rants.

I admire Marx for his criticism of capitalism. His visions of communism are something that is rather futuristic, and at times unreal. But since you are just playing the assuming, finger pointing, and name calling game you have no idea what to even say. Maybe you should understand critics before dismissing it.

Also, the amount of exploitation that happens within capitalism is exactly what Marx was about, what difference does it make if it's a dictator or hundreds of dictators under the guise of corporations and venture capitalists?
edit on 20-5-2019 by strongfp because: (no reason given)

I haven't called you any names.

I have challenged you to read your own posts to maybe see the irony in your asinine statements.

You ignored the question and just called me a communist.

I asked a simple question:

Marx's criticism of capitalist economics and social / political life is quite clear, and well known. What is your actual rebuttal beyond the fact it was an economic and political tool used by dictators.

Let me elaborate. What is your rebuttal against Marx's critic of capitalism?

Which part in particular?

And no I didn't ignore the question.

The question itself is an ironic example of a communist failing.

I also did not call you a communist. I said you have a hardon for Karl Marx and communism. Your posting history is replete with examples of the use of communist ideology to make your points.

If you aren't a communist, then you sure are fooling everyone.

So you've labeled me as a communist?

Oh boy this is why political discussion on this website is dead.

I see you're still ignoring the question. And I'm not going to spoon feed you what Marx's works were so you can just get an easy way out. Clearly you don't understand his criticism of capitalism, and why it has lasted for this long in the hearts and minds of millions of people around the world.

Here's a hint, it's not as political as you think and it's mostly about social economics. Hence why I keep saying it's a critics point of view. People make it political because capitalism is an oppressive system.

There is nothing wrong with holding leftist (i.e. more socially liberal) views. The problem becomes when a person becomes so convinced those views are the only way that they go on a religious crusade over them. It shuts down dialogue.


I was also very liberal, till a few years ago (2014 to be precise) when I figured out that the new age movement is actually a Luciferian one. Its New Age of Aquarius movement that is at the heart of the current leftist movement. I promise you that this is so because I was within it and i saw what was going on. You know who else wanted to bring the new age of Aquarius? Adolf hitler and his brownshirts, and it seems like that mans ideologies has creeped into the minds of many people on the left, but thats largely thanks to MK Ultra and Social Engineering.


In their minds, they are always right, and they justify their actions as "The ends justifies the means" which is also what the jesuits from the catholic church teaches. Makes you wonder where the real crusades come from, considering Hitler was inspired by the Jesuits and modeled his SS army according to that organization. The Jesuits were the masters of Subversion.

Until people learn to recognize whats really at the heart of madness, nothing will change.

Unfortunately, the left are not the only ones with problems, the right has problems too. Being in the "Center" position ive been insulted by both sides of the coin.

So basically we aren't allowed to criticize especially when wrongs are being done by either of these two sides? What about those who dont subscribe to politics but do in fact believe in the U.S constitution?

Both sides are equally being manipulated by the same powers that be into fighting one another like chess pieces.

I sure hope people wake up and walk away from the hegelian dialectic. It's a soul trap. There is no solution within politics. There is solutions if we stick by the U.S Constitution and Natural law, the way it was taught by the founding fathers. 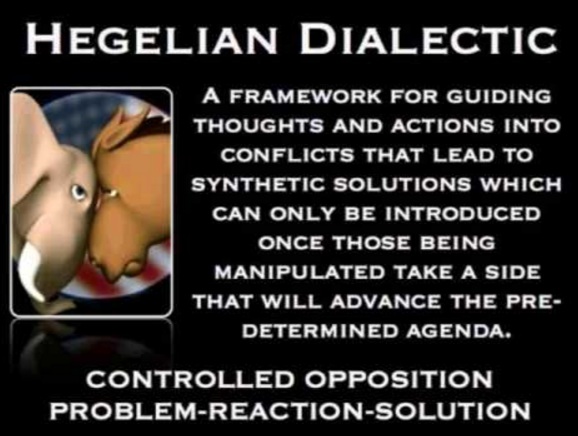 If you really want to walk away from the beast system, you have to first realize that both sides of the coin have been compromised by the real rulers and principalities of this world.

Time to come out of Babylon, or sink with her.

If one planned to walk away by way of rant, some readers would expect a Mic drop kind of rant. If you plan on taking the OP's word for it, then so be it... that's your opinion on the matter.

The OP isn't going anywhere... this rant is nothing but a makeshift failed New Year's resolution in the making. It was actually a great rant to begin with if you ask me... it's just missing a key ingredient. Big friggin deal... the OP walked from one side of the line to the other. The tactics on each side don't change because someone moved their pawn.

The patterns that my take on another's rant holding such relevancy to the woes of others is only feeding my concepts to be more and more accurate. Why are people getting so upset with how OP's are woe'd by onlookers anyway?

Notice that it's not only my questioning that's being ignored, but there's a pattern of other posters asking why their questions are ignored?

If you choose to judge a book by its cover and feel that one day the OP will focus on action over opinion, then that's for you to process... not others.

Judging a book by its cover?

If you do bad things to another person, you will be judged as a bad person. If you try to push a narrative and force it into people's minds like the brownshirts did, you deserve to be judged as an authoritarian. Its ultimately about actions, not words. Both sides needs to apply the Golden Rule. Otherwise, the future is a dark future.

We usually earn respect when we do what is morally right through SELF awareness. But not many people have that.


These idiots have themselves convinced that the #walkaway movement is 90% Russian bots stirring trouble. Boy are they gonna be surprised come election day. Same people telling them it's not real are the same people who told them Hillary had a 98% chance of winning.

originally posted by: ttobban
The common link with all of these ATS rants:

Never in these rants do we get to read what the OP plans to do about it themselves.


Well because the title never implies the OP had a solution. It clearly states it's their reason to walk away and not once included a statement saying they have a solution to it. Why does someone who is stating their view HAVE to have a personal action of any kind? Why do you feel they are obligated to cater to your needs?

I mean, you're practically already doing it here. And as long-winded as it may be, you've yet to include any personal plan of action yourself.

So what will you do?

Put forth a plan of action to combat the woes of the rant forum, or just continue to mindlessly rant here like the rest of us?

Getting rid of farting cows will do absolutely nothing with regards to climate change.


I posted this to some lefty eco nut and they responded it's not the farts, it's the burps(not kidding)...their thought patterns have completely shorted out and now they want to make the laws for everybody!

posted on May, 20 2019 @ 06:26 PM
link
What to do? Start with the people closest to you. Friends and family. That old saying that "charity begins at home" is true enough. Try to take care of the people you know, and don't throw your support into political corporations like the current political parties. The only real thing you can do there is give money to those organizations, and believe me, you have no idea where your money is going.

The trick, though, is you shouldn't expect to be thanked for trying to help family and friends. People sometimes get embarrassed that they need help, and will actually even resent you trying to help. Also, try not to give ("loan") them money, but instead give them your time, which is even more valuable. And be selective. Help the people who want and need help, but not those who just want to take advantage of you for selfish reasons. Just because they're your friends or family doesn't mean they're not freeloaders who think the world owes them something for nothing.

But at least you'll know where your money is going. Join up with a political party and everything becomes far to impersonal and abstract. Bring it back home.

Karl Marx and others like Engels, made many "refutations" of capitalism.

You just asked me to write a book if you wish me to provide a proper rebuttal. If you'd prefer, we can do this piecemeal, section by section, or you can whine some more.