posted on May, 18 2019 @ 07:38 AM
link
Incredibly rare because the coin depicts an Emperor who ruled a breakaway Empire that is now Germany and France for just two months before he was killed , probably by his own soldiers. 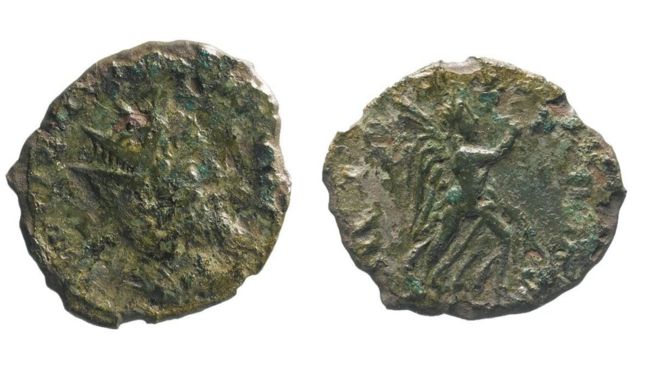 The coin is from the reign of Ulpius Cornelius Laelianus who's two month reign was in AD269 , it's only the second of its kind found in Britain .

"The fact that one of these coins ever reached the shores of Britain demonstrates remarkable efficiency and there's every chance that Laelianus had been killed by the time this coin arrived in Cambridgeshire."
The ill-fated emperor usurped the throne and ruled a breakaway empire in what is now Germany and France before being killed, probably by his own soldiers.

Dr Sherlock, who is the lead archaeologist for the A14 project, said "discoveries of this kind are incredibly rare".
www.bbc.co.uk...


I wonder the value of this coin.

I think its value is probably more historical than monetary but as it was discovered during building works it will likely be given to the archaeologists by the company in charge of the works.


What's going on, in that image on the coin?

On the heads side is the Emperor wearing his crown perhaps giving an offering to a God , on the tails side it's hard to tell but they look like trees to me .

Priceless, until someone really wants it and puts a price on it, and then the value goes up. Like art.

posted on May, 18 2019 @ 08:41 AM
link
a reply to: gortex
The episode gets a couple of sentences in the Cambridge Ancient History;


For although it was not until some four or five months later that [the rebel Emperor Postumus] was able to finally dispose of his rivel, Ulpius Cornelius Laelianus, the revolt of the latter may well have begun earlier. Some idea of this clash of foces is given by the fact that the mint of Cologne was still striking a plentiful issue for Postumus for the New Year of 269 while the legion XXX Ulpia of Vetera (Xanten) went over to Laelianus, and both Mainz and the capital Treves, where his coins were struck, also joined him. Laelianus was shut up in Mainz and died when the city was taken...
Vol XII p191

""The fact that one of these coins ever reached the shores of Britain demonstrates remarkable efficiency ..."
Not necessarily his efficiency. Cross-channel trade would have done it.

Thanks for the historical addition DISRAELI.

Another case solved by Sherlock.

originally posted by: Rewey
a reply to: gortex

Moreso, that it was once held in the hands of someone long ago, and used to purchase items of necessity...

I wish I could hold it, to feel the memories of that person. The emotions, the daily moments when they merely pondered things. The life..

Even a stone has meaning when held by someone.. but a coin. That holds so much more.

originally posted by: Fallingdown
The history of civilization in Europe fascinates me .


We have a lot of what we consider our language, to thank the Vikings for, as they raided and settled in England..

I also find this history, fascinating.

Short of a lengthy video of the Norse language by the brilliant Dr Jackson Crawford, this says a lot.

posted on May, 18 2019 @ 11:50 AM
link
Most people wouldn't even notice coins like that when they are shoveling out their garden spot. or planting a tree, there were lots of coins buried by people in the past to keep them safe, apple orchards were a good place to bury them, so were spots where there was a distinguishing feature so the owner could find them. But people died and their money was lost, others got dementia and could not remember where they buried things. Sometimes they are buried deeper than a metal detector can go, and if they were in pottery jars, sometimes the metal detector signal does not show much.

originally posted by: DISRAELI
Not necessarily his efficiency. Cross-channel trade would have done it.

Could even be the remnants of an attempted bribe to a Legion in Britain, something that was commonplace in this period of the Empire.

posted on May, 18 2019 @ 01:37 PM
link
a reply to: Flavian
I get the impression from the CAH extract that his area of influence was very local, the loyalty to "our boy" of some garrisons in the Rhineland.
Once a coin was in circulation, it couid travel quite some distance in small stages. I don't suppose the name on the coin would matter much in trade, as long as it felt like the right quantity of precious metal.
My first thought was that the coin had been carried across the Channel by a trader before buying something in a British market (or after selling something British in a Continental market).
Alternatively it could have been spent or dropped by soldiers heading north to join the forces on Hadrian's Wall. The discovery can't be far away from the course of the great north road.
"We will camp here for the night, sergeant. Take five men to the nearest settlement and procure one hundred portions of that local fish delicacy. And tell them we don't want any of those nasty soggy chips."

Wow, amazing find! I would imagine that there are people who would be willing to pay a fortune to own that coin.