posted on May, 17 2019 @ 07:29 PM
link
The all of a sudden death of the species issue is now a new theme of the Progressive power grab. I put this here because it is Political and facts tend to get dismissed by power grabbers. Lets avoid the selective memory of the people who want us to believe every word from mouths that have a bad track record as publicly reliable to provide information. We have to be realistically speaking and not emotionally speaking. 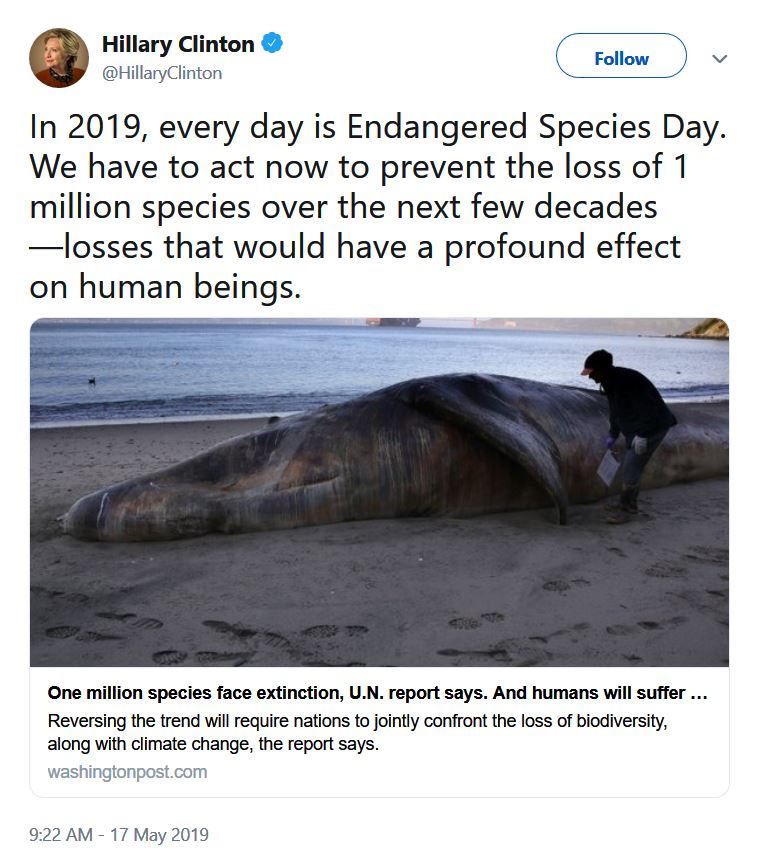 
In my presentation of this thread I would be remiss to not point out:

Even Google believes in ATS, I typed gorbachev environmentalism and right there was this at #2
www.abovetopsecret.com...

So, I see it as the roots of what amounts to Communist plans to use Environmental issues to take over the world. IMO the US and Europeans like all of Britannia are in their way and as we had the power to keep them from their own Blitzkrieg of Europe and the Iron wall around Europe came down. We can defend ourselves unlike say a Taiwan or even Nepal from the Chinese for example. We mean to stay free when they mean to enslave the world. Islam will be their natural enemy but for now understand they have been practicing what you are reading in Sun Tzu's Art of War that teaches about the enemy of my enemy is my friend.

To tie this into the Soviets one wonders where China fits in on Global environmentalism compared to the Soviets?:

Here is a primer on Gorby wanting to use this against the Western gov's. "At the center of the scheme for global totalitarianism is the increasingly discredited anthropogenic (man-made) global-warming theory, the film and experts interviewed for it point out.


Here we see Gorby lays out it is Consumers and Capitalists are to blame for destroying the world. Think how China and the other Communist run Factory's that look like the Pink Floyd Wall movie and Animals Album depict, spew things that would shutter the plant in the West when you read this one.
www.latimes.com...


My conclusion as professional environmentalist is, I don't see it as this is some kind of abnormal happening on Earth because we have had many events that leveled the field that were deemed near total extinction of life on Earth by the data.

Adapt or Die was the phrase of Darwin. We see fishes and insects that take advantage of moving to a new place and having no natural predators. Now that is sad to see what you and I are use to seeing be bumped out, but it is a natural part of living on Earth. Things change on this Planet and you better change with it. I am Christian by faith and would keep religion out of the Darwinian discussion here please. This isn't about religion unless you would say Communism is a religion. It is a metaphor for one I suppose in China and NK.

Because I see it as the create a problem 1st BS discussed in the dialectic.

posted on May, 17 2019 @ 08:33 PM
link
Since when did she care about life, where was she when Christopher Stevens and the others were endangered and ultimately killed?

originally posted by: Metallicus
Can we have mosquitoes go extinct?

Hillary's Foundation only distributes 9% of the funds in takes in, to needy causes. She's just feeling bad because she and Bill are already as good as "extinct".

She DOES have a point.

The way Barr is going, HRC (Halfhuman Repugnant Crap) is an endangered species, soon to be found at a jail near you....

Well , I Guess the LEFT Will Only Consider the Human Race a Threat to Planet Earth Now If Abortion Becomes Somehow Illegal in All 50 States , and at the Expense of that Will Somehow Increase the National Debt which they obviously Care Nothing About ......Hmm......


originally posted by: Metallicus
Can we have mosquitoes go extinct?


Neither are bedbugs, but I note the urban reclamation project to preserve them seems to be proceeding apace.

posted on May, 17 2019 @ 10:34 PM
link
ha ha, the urban reclamation project. I haven't had the misfortune of knowing about that personally, thank goodness. I have a few times a a youth inthe military of getting chiggers inside the belt line. Permission to scratch sir?
edit on 17-5-2019 by Justoneman because: (no reason given)

Don't even talk to me about chiggers. The little sh1ts like me and will come from miles around to drink my blood. As a consequence, I'm so allergic to them that if I get them on the back of my knee, just one will swell up to the size of a lime. We're not even into the other, more sensitive areas.

Yeah, slightly paranoid about walking through long grass in the summer.

I thought the image on the Animals album cover was Battersea power generation station? Keeping the lights and heat and heat on isn't quit consumerism in my mind.

You are right about keeping the lights on is not consumerism. I wasn't sure about what facility that was on Animals album. They cartoon movies of the Wall went after the filth of those type of Facilities. Ok to go after Western companies but not Ok to challenge the Eastern Bloc Countries on it.

If you check out Africa, the UN won't let them have electricity from best i can tell. The concern is Pollution. Yet no concern from them on China, India and other 3rd World dictatorships. They can ignore them not having sanctions but the Black people of Africa are sitting on land the Elites want to stay uninhabited, IMO.
edit on 18-5-2019 by Justoneman because: (no reason given)