Joy comes from within, that’s an important thing to know.
Find joy

Others can bring you happiness, joy is around when you are on your own.
Happiness is great but you need others to make you happy, joy can be found sitting, bathing in the sun light without anyone around

I can’t sing or rhyme but have a very dry sense of humour that makes people think then laugh, I dance lots and really good.

Maybe you can do a poem about Joy and happiness, finding them both, maybe in the sun, a little sun, like a light globe sun.
I like light, stops me bumping into things, flags, nah, happy to flag threads that teach me something, teach others to be better, kinder and less self centred

Okay, you caught me.

I'm actually night blind. So I really have to turn the lights on to walk around without stepping on and/or kicking invisible (to me) things.

So I'm sitting on the couch watching TV, which I can see OK because it is color lights moving around after all. My Granddaughter says, "Grampa, is this supposed to go this way or that way?"

Then I'm like, "You know the routine. Turn the light on, hand me my magnifying glass, then ask me."

Yesterday was a day for flights of fancy. Today is overcast. Feet on the ground and all that.

Maybe you can do a poem about Joy and happiness, finding them both, maybe in the sun, a little sun, like a light globe sun.

This one: Under a Christmas Tree was a three dayer.

Co-worker told me about her property. Next day I rode a bus to visit my 1st wife. Morning after sleeping on the floor in her kids' room, the phrase "Salmon spawning under a Christmas tree" came to mind, then built from there.
edit on 17-5-2019 by pthena because: (no reason given)

I should quote the original question:


originally posted by: Lightsurgeon
Man is the most insane species. He worships an invisible God and destroys a visible nature. Unaware that the nature he is destroying is this God that he is worshipping - discuss


The strandings have occurred up and down the West Coast, on major public beaches and in sheltered coves. What they have in common is the heart-wrenching image of these giants of the sea dying as they try to reach their feeding grounds, but not making it.

Gray whales make one of the Earth's most epic migrations each year. Filter feeders, they spend late spring through fall off the Alaska coast, eating and building up a thick layer of blubber. They forage for their food of choice, small sea animals called amphipods, scooping up sediment from the sea floor and filtering out the tiny shrimp-like creatures.

Then, in October, they begin their 6,000-mile annual journey south toward sheltered warm water lagoons in Mexico’s Baja California Peninsula and the Gulf of California, where the females give birth. During the three to four months they are traveling or in the waters off Mexico, they eat almost nothing, living off the fat they’ve stored up, said Calambokidis.

But they may not have found enough food last year to make it through their fasting months. In recent years, whales observed making the journey north were "emaciated and thin,” he said.

Younger whales seem to be especially at risk, with dead juvenile whales turning up on beaches emaciated, said Justin Viezbicke, the California stranding network coordinator for the National Oceanic and Atmospheric Administration. He is based in Long Beach, California. 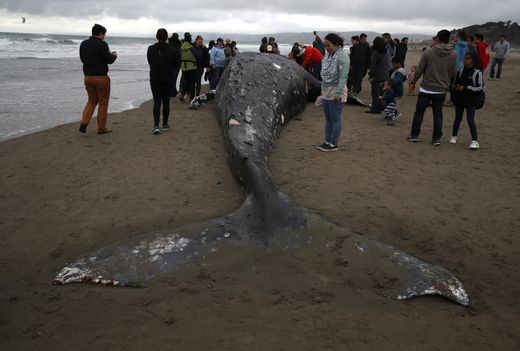 This hit me pretty hard this morning. I take it kind of personal.

My number one fiancé and I took a road trip to Neah Bay, on the mouth of the Strait of Juan Fuca, in October of 1995. We got out of the car and ran down to the beach to watch children playing in the surf and sand.

Then the Gray Whales came by to say hi. Some of the smaller juveniles even body surfed. It was way cool to see. The people who lived around there and frequented the bay commented that they had never seen the whales get so close before.

Of course my fiancé and I thought the same thing, "It's because we are here, and we have the magic aura that makes them want to check out what's what." Well, you know how people in love in their own little bubble think, not exactly rational like.

So the whales saw what they wanted to see and went on South, just a break on their journey.

We decided then to spend the night nearby, rented a cabin. When darkness fell and there was a fire to go to with beer and such, we headed down to the beach by Cape Flattery.

I mentioned above that I have night blindness. Well she had it before I did. So as we walked down the rough path from cabin to beach, heading for the fire and beer, I held the flashlight in one hand lighting her way and her hand in the other.