Alabama: Hey, y'all, watch this! Missouri: Hold my beer.

No one is risking any lives. Are you seriously unable to understand there is an exception for risk to the mother's life?

In Alabama, and I believe in Missouri, a doctor can legally perform any abortion at any time under this new law as long as there is risk to the mother's life or serious risk to her physical health.

Do I need to type slower or something?

Laws like this are not the reason for Rowe vs. wade... abortion started off illegal in America.


The reason for RVW is because of the logistics on the ground..

Countless teens afraid to tell their parents they fooled around , so they Iliad coat hangers..


Victims of rape and incest being forced to deal with their rapists actions for life..


All the reasons people point to not to make abortion illegal used to be the facts on the ground..

People forget how hard it is to get broad sweeping change in America.. and how bad an issue must be for them to have broad change.

If abortion isn’t illegal there is no threat to the lives of the boys potentially falsely accused do to the new abortion law..


Why should someone falsely accuse their lover of rape to have an abortion, if abortion was legal either way???


The abortion law creates that particular problem, then Creates a worse problem for women who now can be prosecuted because their rapist got off..


This seems like a carbon copy of the snopes /evolution trial..


A bunch of fundamentalist Christian politicians in Tennessee stage a publicity stunt trial for political clout and tourism dollars, only to have it blow up in their face and remove Christianity completely from the school system.
edit on 18-5-2019 by JustJohnny because: (no reason given)


The only problem with abortion is it has been used as a catttle prod to hype up the sheeple ..


Laws like this are not the reason for Rowe vs. wade... abortion started off illegal in America.

Abortion has been performed for thousands of years, and in every society that has been studied. It was legal in the United States from the time the earliest settlers arrived. At the time the Constitution was adopted, abortions before “quickening” were openly advertised and commonly performed.

Drugs to induce abortions were a booming business. They were advertised in newspapers and could be bought from pharmacists, from physicians and even through the mail. If drugs didn't work, women could visit practitioners for instrumental procedures.

The earliest efforts to govern abortions centered on concerns about poisoning, not morality, religion or politics. It was the mid-19th century, long before abortion became the hot-button issue it is now.

The American debate over whether a woman should have the right to end her pregnancy is a relatively new phenomenon. Indeed, for America’s first century, abortion wasn’t even banned in a single US state.

Advertisement for Beecham’s pills, late 19th century
Even the definition of abortion was different. In early America, as in Europe, “What we would now identify as an early induced abortion was not called an ‘abortion’ at all,” writes Leslie Reagan in When Abortion Was a Crime: Women, Medicine, and Law in the United States, 1867-1973. “If an early pregnancy ended, it had ‘slipped away', or the menses had been ‘restored.’ At conception and the earliest stage of pregnancy before quickening, no one believed that a human life existed; not even the Catholic Church took this view.” Abortion was permissible until a woman felt a fetus move, or “quicken.” Back then, Reagan notes, “the popular ethic regarding abortion and common law were grounded in the female experience of their own bodies.” 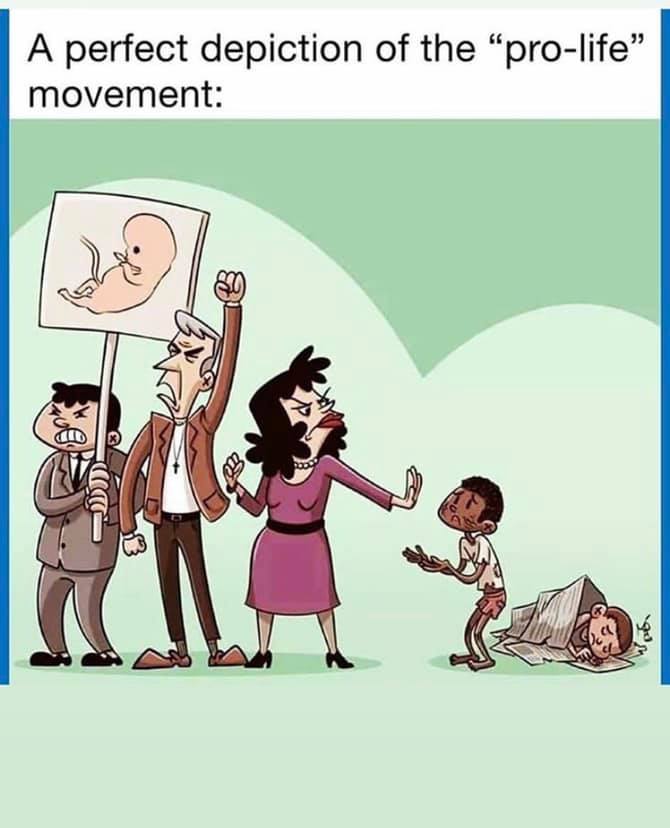 The right - abortions are done out of inconvenience (the minority)

So create a law regarding guns that is so outrageous like the right is doing in order to try and change the law.

Guns are a right but that is not set in stone, the founders made it so that it could be challenged and changed if need be.

The abortion law creates that particular problem, then Creates a worse problem for women who now can be prosecuted because their rapist got off..


What part of "women receiving an abortion cannot be prosecuted under this stature" are you having trouble with?

I'm typing as slow as I can, dammit! Do you need pictures?


I don't think we should be subsidizing Israel.

The military is necessary, mainly because of the liberals in government who think they can stick their noses in everyone's business and can't figure out any better way to protect a border.

The war on drugs is a disaster that I was calling out before you likely even know what it was.

I don't think we subsidize "yada, yada, yada"... I could be wrong though. In the end, just another wanna be Casanova who wants easy sex with no consequences, but you could at least try to know what you are talking about.

posted on May, 18 2019 @ 09:12 PM
link
If the reason there isn't an exception for rape in the bill because "you got to protect the boys." Then I don't see that going over well with the public.

Well, I am just glad it isn't my state that will waisting millions in court over it.

One would think if these bills pass into law then it would be natural for two things to occur:

So with this most basic logic let's see how many "democratic votes" there are in 2020. Hence my point will simply be that it will be anecdotal evidence of election fraud such as what we saw during the mid-terms.

Something is not adding up here folks.

Watch for massive election fraud from the left in 2020.

I actually believe murder should be against the law,

That sentence is odd. Murder is a legal term. It means the unlawful killing of another person. So your sentence could be rewritten as I believe unlawful acts should be against the law.

Abortion is not murder in the States where abortion is legal for that very reason. I assume what you really mean to say then is that you believe all States should change their legal position to make it murder because you find it immoral.

Fair enough. I oppose that notion myself, but it makes more sense if it's stated that way instead of misusing a legal term by conflating it with other arguments.


Sounds good to me. We have enough people who are afraid to fight for their beliefs... don't need no more.


That's because you seem to think everything revolves around political party. It does not.

Doug Jones ran with a promise that he would "not be Schumer's lapdog." Now, there is some debate on whether he has kept that promise, but he has shown himself as one of the bluer of the blue dog Democrats. Roy Moore was besieged with lies about his sexual propriety, something that is decidedly anti-conservative. In addition, the last three days before the election saw Moore silent while Jones was running ads on top of ads. Roy Moore essentially let that one slip through his fingers by giving up in adversity.

Next year, Doug Jones will have to run for re-election. If his record shows conservative values and honesty, moreso than his opponent, he will get re-elected. If not, he won't. No one cares much down here what colors he flies... we care about who he is and what he does. Strange concept, I know, but that's the way it is.

As long as you continue to think that the only thing that matters is the letter next to the name, you will never understand the South. Not that it seems you want to anyway, just sayin'...

Woman wants no child, it gets aborted. That is how it works in the real world of survival.


In nature, we call that "extinction," not "survival."

Certain segments are. The birth rate is lower than the death rate.

Whats to stop new mothers who don't want their babies from killing the child after it's born?

19 Moms who killed their kids

Post partum depression being factored in or even malicious wanton killing of unwanted children will continue.

Either way, from abortion to post birth, these women will find a way.

Ya, thats some basic logic alright, are you 13? you must be if you think people move in or out of a state based on availability of abortion.


Well AOC says were going to be extinct soon..who knew her and Alabamians had so much in common.

posted on May, 19 2019 @ 01:59 PM
link
Apparently children born of rape and incest are subhuman given the way people are talking about them.

Apparently children born of rape and incest are subhuman given the way people are talking about them.

Forcing rape victims to let the fetus develop to the point of birthing treats the pregnant girls/women as subhuman.

We all have our perspectives