posted on May, 13 2019 @ 10:51 PM
link
Leave it to whitey to invent the most RACIST vegetable in the history of the known universe.

And that's the punchline in this most glorious piece of shotgun journalism! 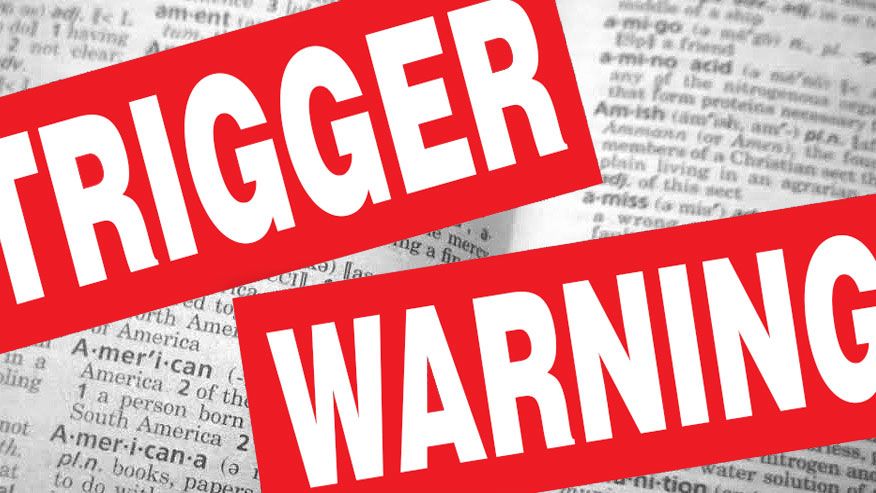 Cover your eyes, because what I'm about to show you is 3.293 times more offensive than a white couple at a pro-diversity rally... 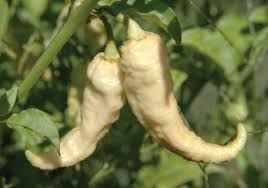 Okay first of all hot peppers are plants of the New World, meaning, if White People cook and eat them that's Cultural Appropriation (that's RACIST).

Therefore, concerning hot peppers, and White People, what we have here is the most in your face realm of Cultural Appropriationology the world over. You see it wasnt enough to steal them from Mexican's, nope these greedy White Devil's had to go over the top with their Mad White Devil Science (dont forget Science is RACIST too) breeding programs in their unending attempts to mutate these poor, poor vegetables into looking nothing like Mexican peppers. This Neo-eugenicist front last time I checked had literally hundreds of new cultivars per year emerging, none of which being announced by their breeders with a forward note praising Mexican's. No fealty pledged. No hymns being sung. No letter of intent towards using the peppers to make pepper spray to wash the white skin of those "Border Vigilante" heathen White Devil's trying to deny Mexican's their Right of Migration across the border.

Which is typical of their kind. I mean just look at the poor, poor tomato. Italian's act like they invented it. Yet they didnt have it until maybe a couple hundred years ago. And the tomato is a proper kindred spirit of the hot pepper, not to mention a very close relative in the Plant Kingdom, but the hot pepper cultists have them trumped.

They even have a big Internet forum where they scheme and plot the next big cultivar and the garden plots to grow it in. Yet no manifesto to loving Mexicans is to be found anywhere. I'd report the spot to the FBI, if only the FBI wasn't predominantly White People. Since "America" is predominantly White you can count your chickens its mostly White People in that haven of white supremacy, so that right there alone makes the forum RACIST, as evidenced by the flame wars those hotheads get into which you wouldn't expect since it isnt like its a political site. Only White Devils would ever do that. 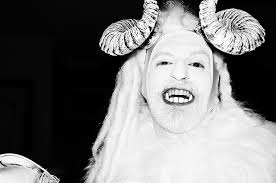 So now I could go on an explosive tirade about the history of White Devils, but honestly I've already puked three times just getting this far into this piece. We all know who they are and what they look like. That's not news.

Anyways, so the general order of affairs regarding new hot pepper cultivars / varieties is each is initially red. Then yellow tends to come next. Then orange. And then brown, but nope it cant be called brown it has to be called "chocolate", which that right there itself is Cultural Appropriation, especially since there's no chocolate flavor involved. Then comes the coup de grâce, the WHITE form, which as an added insult to Mexican's tends to be milder than the other colors of the same variety. 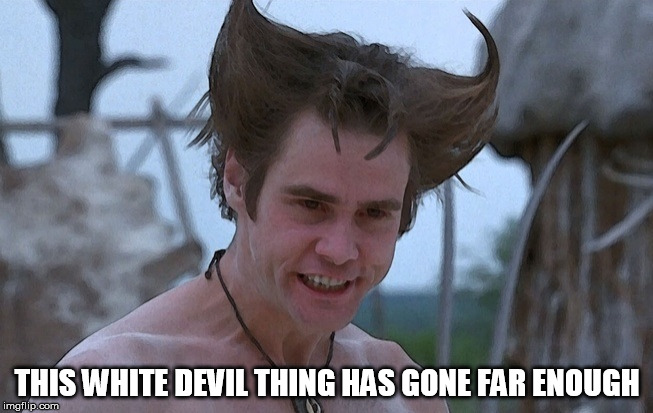 And now, to add insult to injury, I give you proof that peppers are SEXIST: 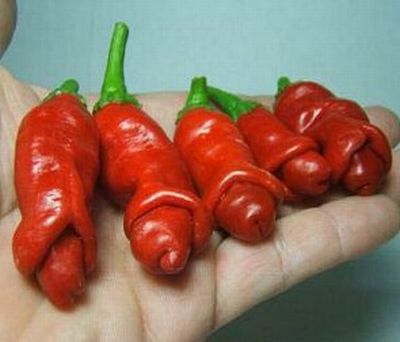 I always make sure to keep a bottle in my purse.

I'm a Cherokee in Montana that grows... 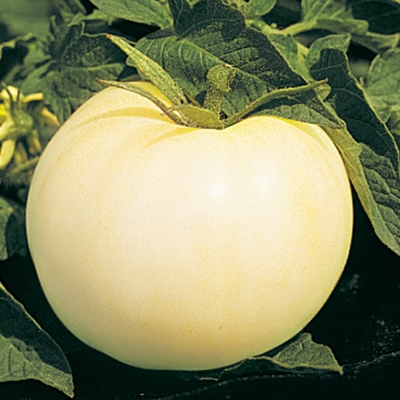 So I guess I'm now going to have to go out and reappropriate some of that white pepper business. 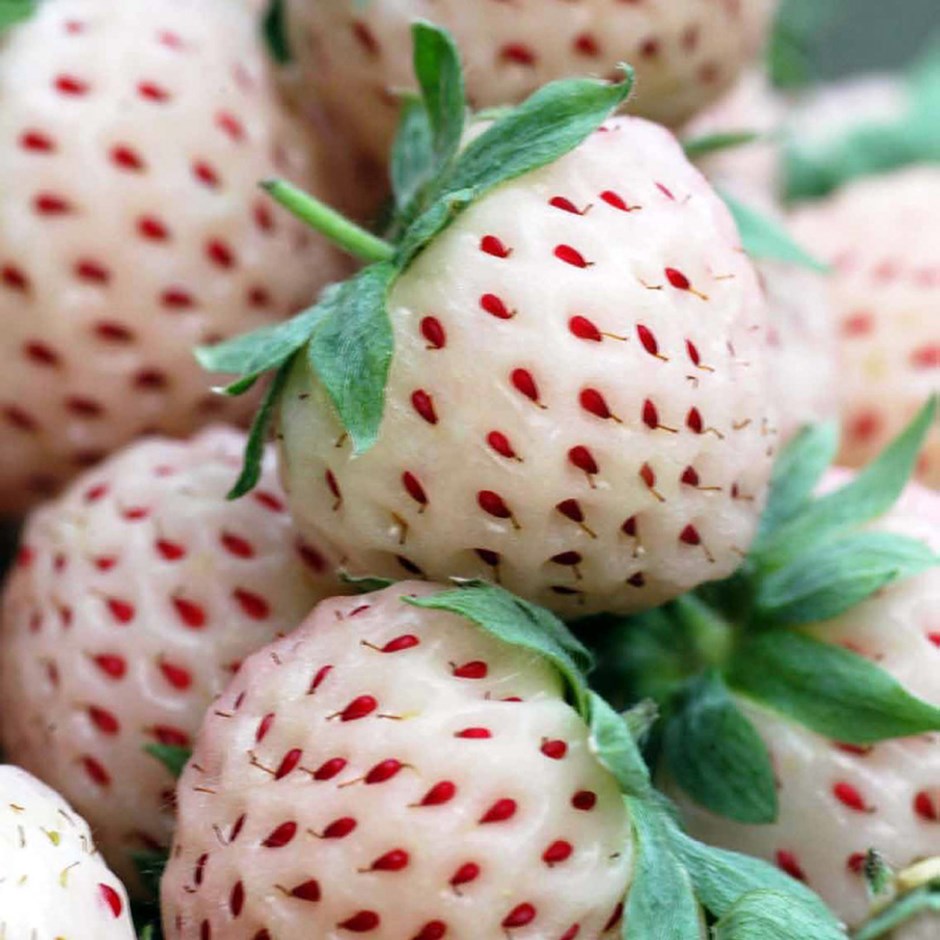 Spicy tossed salad and scrambled eggs they're calling again. Scrambled eggs all over my face. What is a boy to do?

One of last weeks new inventions was this new concept of hot sauce / mixed drink.

The concept being you drop a scoop of the ooze into a shot glass of tequila and whamo it becomes a mini super hot margarita, the shot becomes The Margarita Lava Bomb.

Which is no joke, because hot peppers are scientifically psychoactive.

I went up to this new "CBD hookah bud lounge" nearby with Reaper, Moruga, Ghost, 7 Pot Bubblegum, some others, not to mention oodles of WHITE Devil's Tongue peppers, pureed them all, then mixed into a custom blend Margarita concentrate, all goopy with the salt already in there...

I served it with Tums sitting right there. The one dude that had the balls to try it promptly ate 4 of them LOL.

So there I was utilizing hot peppers, tequila, limes, etc not to mention the margarita name. So that's multiple counts of Cultural Appropriation, meaning I have to excuse myself now go to the mirror and punch myself 3 or is it 4 times...

I've seen the strawberries before but have not grown them yet.

My favorite different color thing that I grow in my orchard and am currently trying to spread around the world are these apples... 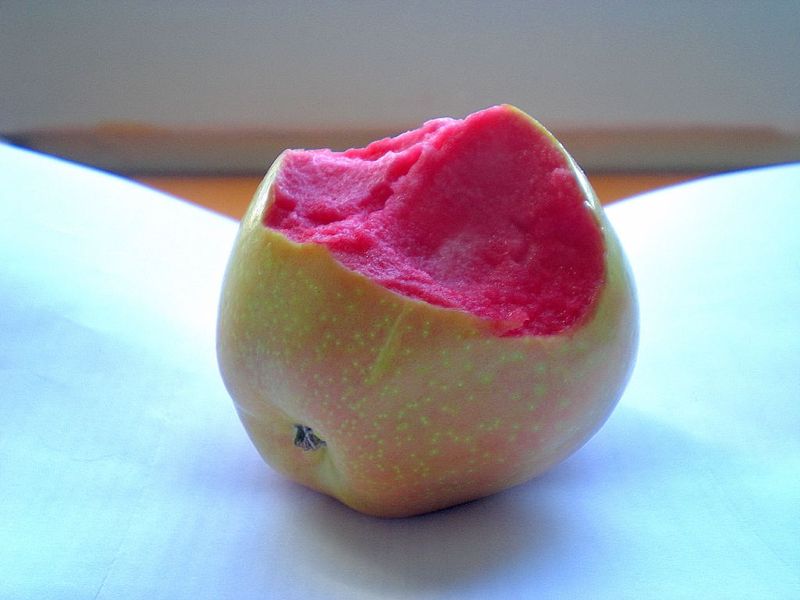 They call them blood apples... they are going to be the next big thing in supermarkets in the US in about 8 years... Europe got a jump on it and is already selling them in stores.

There is a fascinating backstory behind the red-fleshed apple breed that comes from a crazy horticulturalist in California in the 1930's that made them.

I have an original tree from seeds bought from a 1938 seed catalog and planted on a property.

They have since been bought up by big companies, patented and all that jazz.

They taste like a honey-crisp, are excellent for making cider and are self-pollinating.

I'll stop before I talk about the topic forever... but yes, they are quite real.

That's awesome. I can't wait to try one.

I've known and loved blood oranges for years. Didn't know they had an apple variety too. So cool. 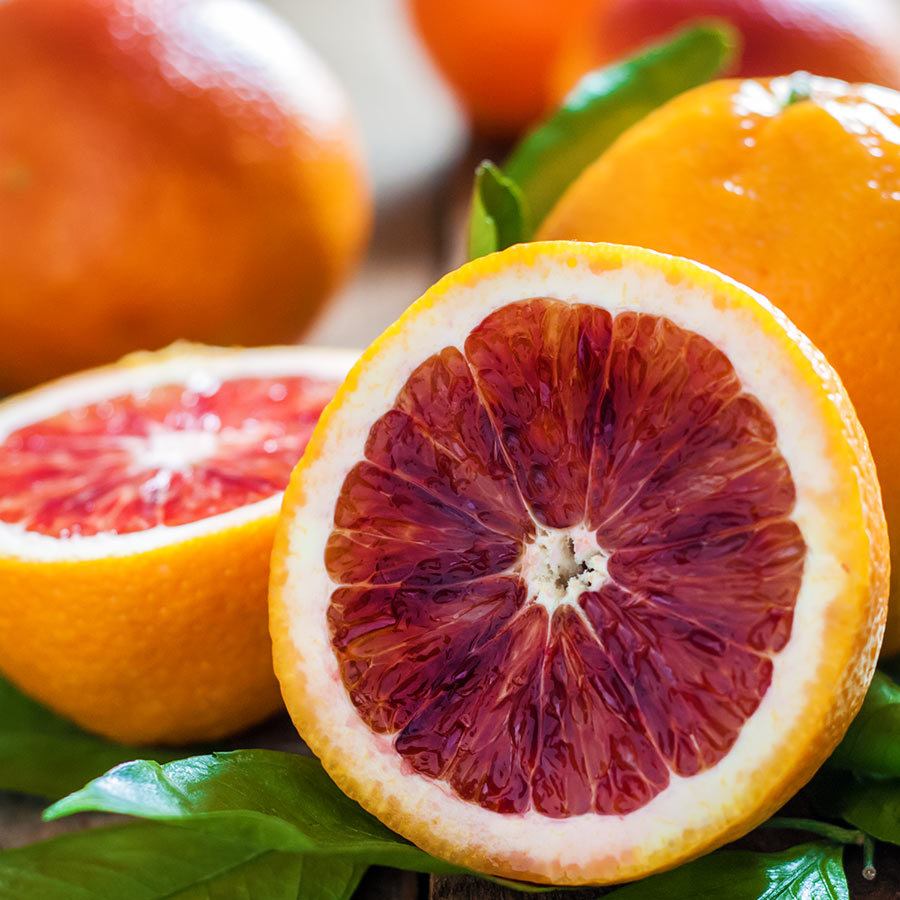 originally posted by: dubiousatworst
a reply to: Lumenari
... trying not to run this off topic...
but would you sell some "heirloom seeds"? Since most apple trees take 6-10 years to produce apples, seems like the ground floor to get into it is now.

I give the seeds away every fall.

PM me an address and I'll save it till the fall... I pay the postage.

posted on May, 13 2019 @ 11:49 PM
link
a reply to: IgnoranceIsntBlisss
I live in an area that has a lot of apple orchards, grafting would certainly reduce the grow time to 2 years though.

It goes further than just speeding up the flowering window.

What's funny is I have a pre-patented tree.

So I'm spreading the seeds around as a really big middle finger to the companies that think they can patent....

This is an odd issue that I have taken as a sort of crusade... I've no idea why.

originally posted by: dubiousatworst
a reply to: IgnoranceIsntBlisss
I live in an area that has a lot of apple orchards, grafting would certainly reduce the grow time to 2 years though.


Cross-pollination makes the apples a mottled white/red flesh.. they call it a pink parfait.

It's easy to tell the difference in the fall...

The peel is red.