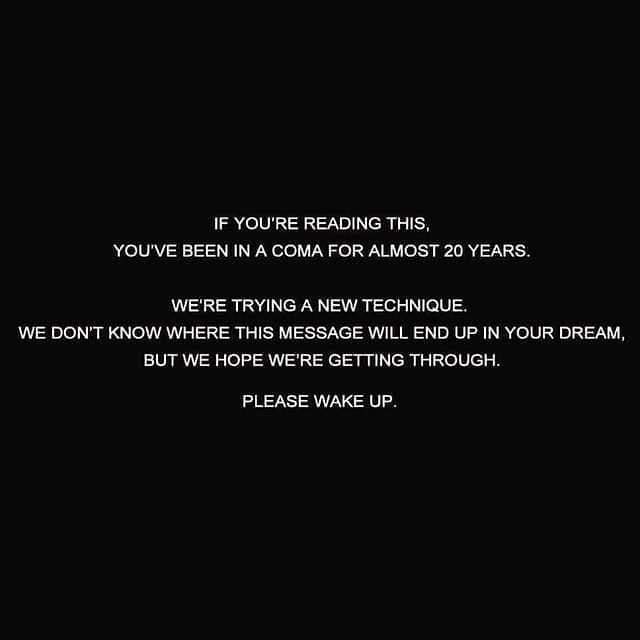 I wake up at 02:40 everyday. I feel sleepy the rest of it. Shouldn't quit coffee.

You can see this?

I like simple things that make me question reality.

That's pretty cool, I wonder if there is any truth to that. I would like to wake up in the future with technology like that exists.

Sataurday Was so long ago, that is so “yesterday” already
Live like it’s sunday

Come on Werks, what's it mean huh? It suggests that the sleeper was once awake because of the time suggested that the sleeping has been going on. Does that mean that we, or us, or maybe just me were once awake and should wake up from the dream we are in?

Have we all fallen asleep? Was it 9/11 that put us to sleep? Or is it just a cryptic existential jab so stir and disturb all the folk who are not ready to ''wake up''. I mean, maybe some of us should not wake up yet because we will only wake up to guess what, another dream.

For that matter who is to say that all of those or us who think they or we might have woken up have in reality only slipped from one dream to another, one which is a dream that we have woken up . It's bee ess.

I mean, in the dream I am having now our species which has steadfastly gravitated from the past to what we now see as the present but used to be seen as the future have found ourselves in a situation that all those previous eons of heading to this point in time seem not to have prepared us. It's like a pot on to boil. simmer simmer simmer bubble bubble and now all of a sudden in the last twenty years or hundred years the pot is boiling over. HOW could we have known.

Or a bee's nest. Just doing i'ts thing when all of a sudden environmental changes, rapid technological developments, indeed the entire scope of human consciousness in the face of instant access to information totally foreign to the memes one was brought up with make this all seem as if our quiet little bee's nest is being stirred by a big stick. Ya know?

I mean if you want to get existential, let's get existential. And then there are those who believe that Donald Trump will solve all these things. Talk about dreaming. And what about all those who dream that by stopping him in his tracks all of this will stop and the nightmare will end. Hell no. We are stuck waking up time after time after time only to find that the person sleeping next to ourselves is guess who, ourselves.

You know those dreams,

Where you have friends and family, and have memories of them, and its all fine and dandy.

Then you wake up and it all falls like sand between your fingers. And those people do not exist here...

My last existential nightmare was around mowing my lawn This time of year it grows so fast, the ground is still so wet from rain and the sun shines and it just grows and grows. My lawn, or lawns are large taking me a whole day just to do the mowing and even then with a riding mower. Yeah, large place.

My neighbor has a larger place as well. So I was standing with my neighbors wife looking at my lawn and then we turned to look at her lawn and when we turned back to look at my lawn seconds later it was three inches higher. So in the dream, my place was larger still then it really is and his place was likewise. He was off somewhere on a month long chore so I was up to me to mow it all and I was freaking.

But then in my dream I came up with the solution. I would get in my helicopter with a gyro compass seat that would rotate with the helicopter when I flipped it over and tilted it forward using the blades as a giant weed wacker to do the job on the grass.

I was greatly relieved to have come up with this solution until I realized I couldn't find the keys. Existential abyss.

Ha.. Really? i thought everyone had them, like alternate realities..


But back to the topic, i think there is a very strong chance that we are living in a simulation, that is not even made by advanced humans, but something entirely different, like a cube, everything might just be a cube, or a sphere, maybe even forms are not real,

maybe just concepts are real, everything else is just simulated.


I think i just gave myself an existential crisis.

Mood music to wake too

I'm toying with this ''simulate'' reality as well. Using that as a beginning template for our speculations on reality appear to be offering a much wider variety of avenues of approach then what we have become used to in the past where basically everybody believed what everybody else believed within any given culture. I'm leaning heavily towards the notion that the availability of conceptual models might be a large part of the existential crisis we may be facing. Stating that more succinctly, the fields of ''IF'' may be expanding beyond our ability as a viable nation or world society agree upon.