Confirmed - Bob Mueller and his Team Were Corrupt and Dirty... Went After Family Members.

Source please, but who am I fooling? We all know TDS doesn't come with a source.[/quote

posted on Apr, 24 2019 @ 04:21 PM
link
The failure of the Mueller Team (mostly angry and jealous Democrats) resulted in a "Report" chock full of red herrings and innuendo and inconclusive assumptions 😎

Speaking of mobsters, fails and utter corruption, did you check out Ol Dodgys tweet from a few hours ago? 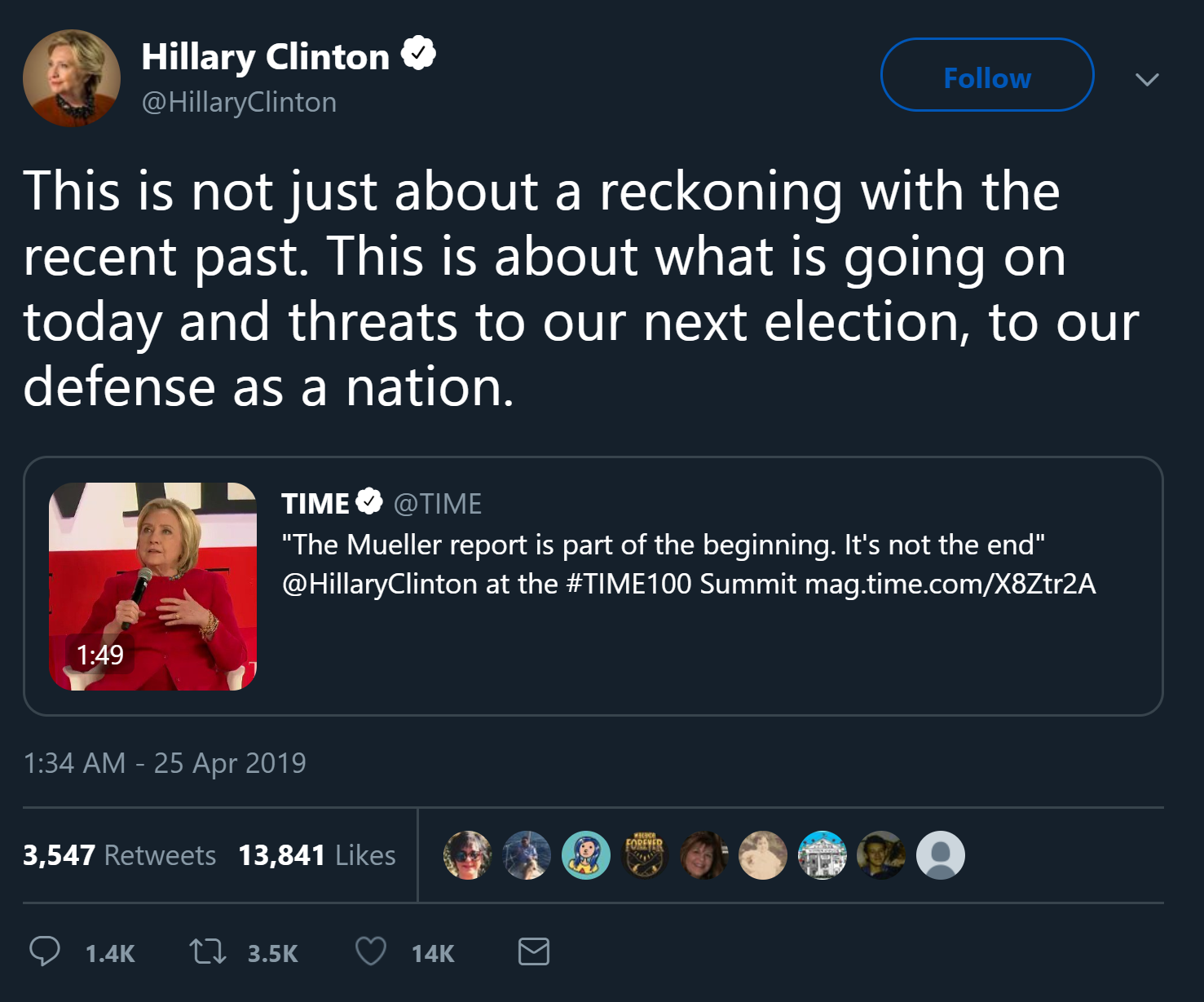 The 2 year-long Special Counsel investigation was conceived by traitors, whose primary purpose was to find, or invent a crime that would result in President Trump being removed from office.

While over here in reality it was because a shady global businessman with ties to Russian money launderers who was also complicit in a scheme to launder money for the Iranian Revolutionary Guard became President. And he lies about it all at every given chance. If Americas intelligence agencies weren't already watching him, someone was asleep at the wheel.

But that doesn't get the dopamine receptors firing like screw the Democrats for you guys, huh?

Seems like Mueller would have found that and mentioned it..
edit on 24-4-2019 by Wardaddy454 because: (no reason given)

Then now we're about to see the left acting as deranged liars again.

Source please, but who am I fooling? We all know TDS doesn't come with a source.

Here is a link for you. Not sure why I am doing this because all you will do is scream "Fake News". Even after the Mueller report proved that 90% of the news articles that this site claimed as "Fake News" turned out to be true.

To be fair, it was Vanity Fair which broke the story that Bruce Jenner was actually a woman. They couldn't even get that right. Talk about fake news...

well that proves it. case closed. all charges against Cohen will be dropped

Then now we're about to see the left acting as deranged liars again.

They defended Cohen when he lied about Trump because it fitted the narrative. Now they're going after him because his claims hurts the Democrats, as they did with pretty much everybody else that did the same.

Good observation. Democrats loved Rod Rosenstein until he showed them he was law abiding. Now, they will not care one bit when he departs.

originally posted by: DBCowboy
a reply to: carewemust
It was an insurance policy to stage a coup d'état.

From the various text messages and testimonies disclosed, the people at the top of the Obama Administration seemed to be well-practiced and experienced at "scheming". No conscience whatsoever.

originally posted by: Waterglass
a reply to: carewemust
Jail time is nuttin. Free sex, drugs and rock and roll. Some need to be shot via a firing squad or hung. The only thing these people fear is death. But hay he along with Brennan and Comey get their allocation of virgins.


Attorney General Barr confirmed during his confirmation hearing that execution is on the table for traitors. Especially so after President Trump's 2017 Executive Order.

originally posted by: AugustusMasonicus
a reply to: carewemust
I'm confused, you feel bad for this guy but Giuliani thinks he's a scumbag and Giuliani represents Trump. It's hard to keep track of who and what I need to be outraged over these days.


I don't feel bad at all for Michael Cohen. The crux of this thread is to further point out how horrible Mueller's team behaved.

Source please, but who am I fooling? We all know TDS doesn't come with a source.


Here is a link for you. Not sure why I am doing this because all you will do is scream "Fake News". Even after the Mueller report proved that 90% of the news articles that this site claimed as "Fake News" turned out to be true.
www.vanityfair.com...


You do realize the same people that put a chart together on MSM bias and put CNN as neutral labeled Vanity Fair as a hyper-partisan liberal source, right? No wonder you are so misinformed.

A lot of people are in a rut, when it comes where they get their news and information from. They don't look at and learn from a variety of sources.

originally posted by: chr0naut
a reply to: carewemust
Are you seriously suggesting that in the investigation of criminal activity (and remember Cohen was guilty) that associated potential witnesses should not be interviewed?
What sort of toy story world are you living in.

Based on your post, we are both entitled to ask each other that question, LOL!

While I wouldn't put it passed them, Cohen has no credibility and would probably turn on his mother if it might get him out of trouble.

I agree. And if Cohen was the only witness/suspect to say this about Mueller's team, I wouldn't have bothered to do this thread at all. But as it stands, he's just one of several who have described Mueller's tactics as Mafia-like.

That's not what happened. He threatened families and said he wouldn't hurt them if Cohen did what he wanted. Cohen in that tape says he didn't even do anything wrong and the loan was fine, but Mueller was still going to screw his family over it.

Judge Ellis openly stated his disgust at how Mueller was treating Manafort. Solitary Confinement for white-collar financial crimes was way over-the-top. Mass murderers are treated better within our system.
edit on 4/24/2019 by carewemust because: (no reason given)

Since you've obviously followed the Cohen case closely, taking the time to explain what he did wrong regarding the "HELOC" loan (whatever that is), is appreciated.

originally posted by: xuenchen
The failure of the Mueller Team (mostly angry and jealous Democrats) resulted in a "Report" chock full of red herrings and innuendo and inconclusive assumptions 😎

It's interesting that many Republican Congressmen who have now seen the significantly less-redacted report shrug their shoulders and say that Barr/Rosenstein/Mueller redacted classified (source/method) information, just like he was supposed to. There was nothing redacted at all, designed to protect President Trump.

Democrats know this, which is why none of them have gone to the secure room to view the almost fully unredacted report this week.

Butt-hurt Democrats want the millions of pages of underlying documents...wiretaps...testimonies, etc., so they can double-check every decision made by the Mueller team, as well as read all the notes entered by the Anti-Trump Democrats on Mueller's team.

Of course, azzholes Schiff, Nadler, Cummings, and Waters, will then LEAK tidbits that show the President, or anyone in his family, in a less than perfect light.

The latest (as of yesterday) was the fact that Obama was storing thousands of Hillary e-mails in his White House office, to keep them hidden, in case an honest rogue FBI Investigator went looking for them.