As with any proper investigation, I feel it is critical to always get a second, third, sometimes even a fourth, opinion on the matter at hand.
I'm currently conducting an investigation on an image that was sent in.

I can't go into too much detail,
But recently a photographer sent the below image in, which was taken in June of 2015.
He didn't see the anomaly in the sky when he took the photo.
And only recently did he notice it, when he was going through some old images.

I brought the photo into foto-forensics and there definitely seems to be something there.
But as with all my investigations, I always provide a "Why" in my reports.
As in, Why this isn't a UFO.

If you zoom into the photo, you can see the object is 9 pixels high X 26 pixels long,
On the bottom left of the object, there is a small part that appears to be hanging.
Both above and below the object, when zoomed, shows 2 distinctive areas of white pixels. (Wings?)

My first diagnoses of this photo is that it is probably an insect - most likely a bee, given all the clovers in the image.
And that when bee's fly, their legs hang.

Also, the lens aperture used was f2.8, which doesn't give much depth of field, and the focus is more on the clovers in the foreground, so the whole background of the scene is a bit out of focus.

As I said, I'm leaning towards it being a bee flying from clover to clover.

Another investigator I asked, said it might be a reflection of the boat in the distance.
The sizes of the black void in the inverted colour, image below match up.
The part that I think looks like legs, could be the ships mast's reflection.

Or perhaps we are both wrong!

So I wanted to get your opinions.

Is it an insect? a reflection? a small bird flying by?

If you want to download the image to analyze, I provided a link to my dropbox.

If you just want to see the image, here is the original (It was shot in landscape)

Zoomed in on the object:

posted on Apr, 23 2019 @ 08:48 AM
link
Many insects do fly with their legs hanging down unless doing a high speed pass. I would vote for an insect based on what I see.. Just an opinion...

posted on Apr, 23 2019 @ 08:56 AM
link
Probably the energy from all those windmills across the shore line opened up a stargate where an extraterrestrial aircraft passed through.
edit on 23-4-2019 by drewlander because: (no reason given)

Obviously.
Thats what those windmills are for.
haha jk.

A man on a glider possibly.

originally posted by: Dr UAE
I just think its an insect


Field of clover? Probably a bee. 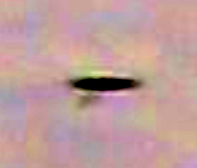 Too bad it wasn't a clearer photo.

posted on Apr, 23 2019 @ 12:45 PM
link
I agree with the 2nd investigator it’s a Fata Morgana ( superior mirage) . The boat appears to have some type of mast. Inverted it would look like what’s hanging down from the object . 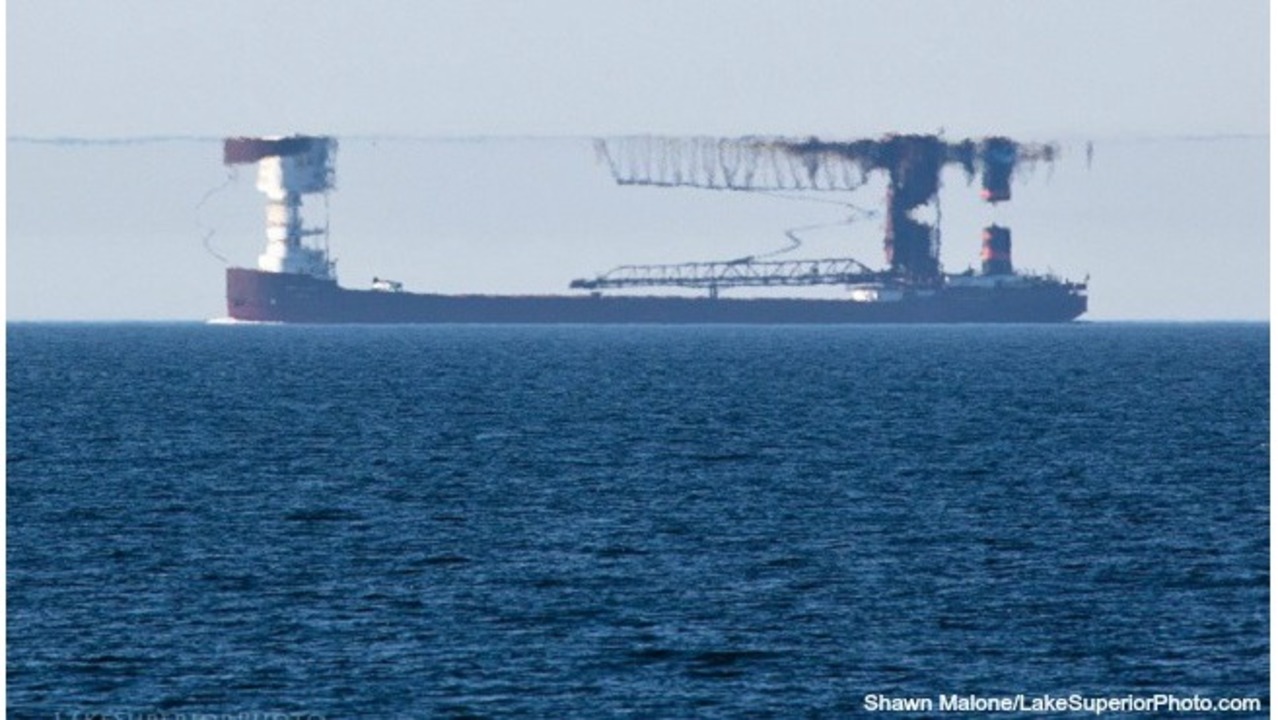 Also, the lens aperture used was f2.8, which doesn't give much depth of field,


No way to judge distance except by focus. The very close clover is in focus.
By size, if it were a bee, it would be have to be in a most in focus distance, mid foreground.

So given the lack of focus and size, it is probably as far off as the windmills,
Typical modern wind turbines have diameters of 40 to 90 metres (130 to 300 ft)

therefore it's a flying saucer with a length of about 130 ft.
The "hanging part" is the dumping of sewage tanks. So biological pilots are inside.

It's a poop shoot?

Man! what a find! 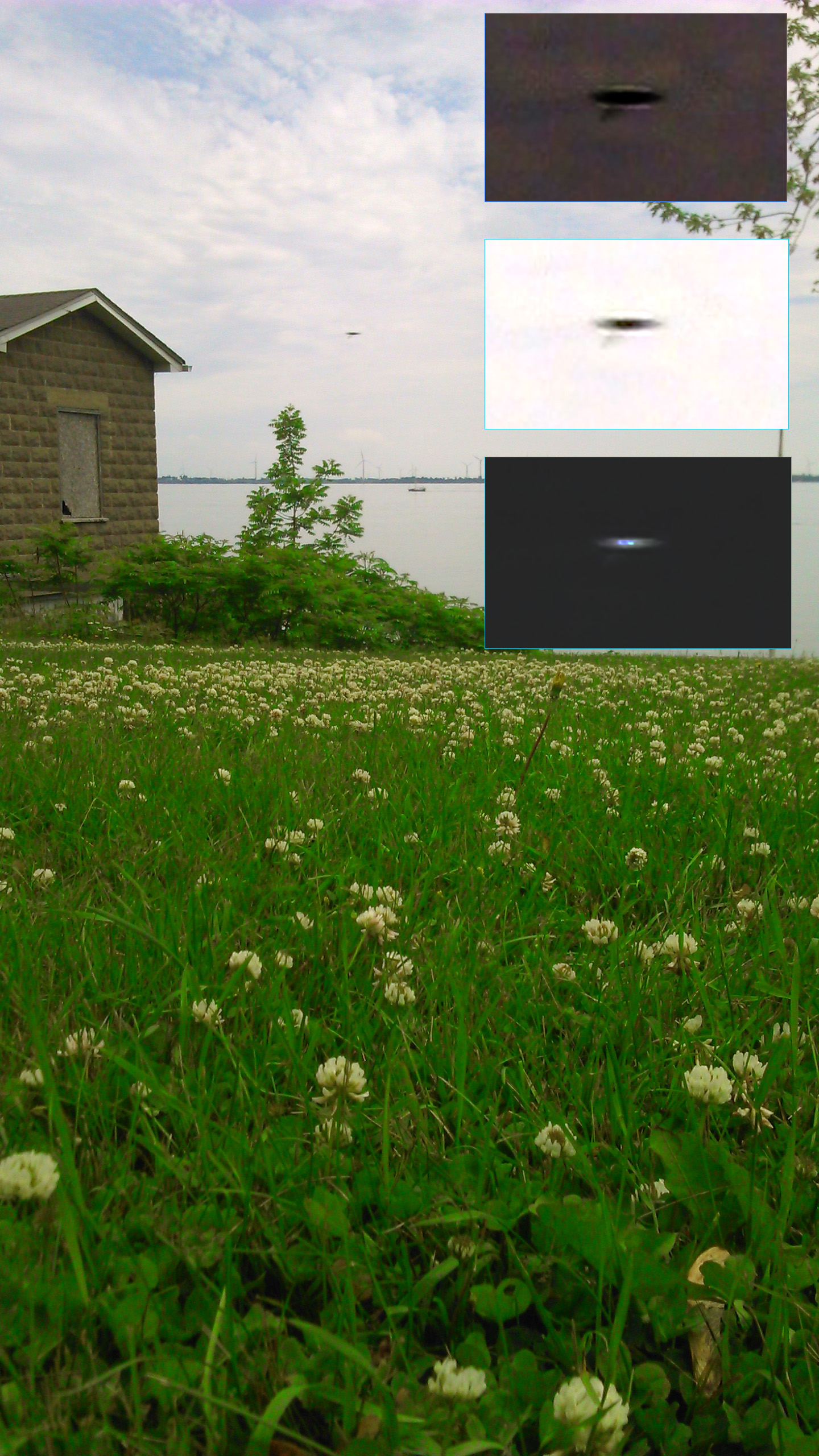 I don't know, tried different lighting. At some point, I could surface some squares. Don't think it's pixelization but I could never be 100% sure about it.

The two white bars on top as the bottom are also remarkable? The distance is hard to measure and would be better if there would be some shadow or mirroring on the water.
Difficult to say.

Exactly,
that's the issue I'm having with it.
Trying to decipher if its small and up close, or larger and mid-distance.

Just gonna leave this picture of a flying saucer that i saw and photographed years ago,

Phone shot so most likely an insect.