Naturally the topic was the Mueller Report.

Schiff was brave to go on FoxNews.

And true to form, Schiff made an idiot of himself again !!!!

During a segment of "Fox News Sunday," Wallace played Schiff a series of TV interview clips in which he made that and similar claims before the anchor reminded the lawmaker that special counsel Robert Mueller failed to find "the kind of coordination" he claims took place.

"Chris, as you know, and I wish you had played the rest of some of those clips, I went on to say that whether that collusion, that evidence of collusion rises to prove beyond reasonable doubt of the crime of conspiracy was a different question," Schiff said. "And on that issue, Bob Mueller says something else that I've been saying frequently, which is the fact that you may not be able to prove beyond a reasonable doubt a criminal conspiracy doesn't mean there is an absence of evidence of crime."

ausername
+9 more
posted on Apr, 21 2019 @ 06:56 PM
link
"the fact that you may not be able to prove beyond a reasonable doubt a criminal conspiracy doesn't mean there is an absence of evidence of crime."

Schiff must have got scared by:...

posted on Apr, 21 2019 @ 07:07 PM
link
They went all in to the Progressive Liberal Democratic Socialist voters .
They failed .
But , they cant say they failed.
They got to keep the rhetoric going.
And the insanity flowing
Matthew 13:49 - "There shall be wailing and gnashing of teeth"

The establishment elite in this country have rarely been so threatened by a president they can't control. Whether it's the media, or politicians and unelected officials on the left or right, most of them that are in "established" positions of power are in some ways beholden to or under the control of the establishment elite. Except for Trump, they can't seem to control him, or destroy him. They're not giving up!

Sure, the "overlords" are all about power, they never have enough and will stop at nothing to get it. By any means necessary!

I agree with most of your post, just not so certain these overlords are even mostly from the USA.

His Doctor needs to "standardize" the scripts 😎

Grambler
+9 more
posted on Apr, 21 2019 @ 07:58 PM
link
Schiff was one of the worst in claiming with certainty that trump or people close to him conspired with Russians in an illegal way.

Now he is claiming he never intended to say he knew it was illegal. Garbage. He allowed people to think this was illegal because it benefitted him and his party to do so.

Now that he is found out to be a liar, he is backtracking.

Meanwhile in this video he goes back to the old dem talking point.

Don Jr said he would be happy to get dirt from Russians against Hillary. And Schiff says this is collusion and even if not a crime, terribly immoral.

And as usual, the interviewer doesn't have the intelligence to ask

"But wait, your dnc paid for and received dirt from Kremlin agents? Isnt that also collusion?"


In addition, Schiff was contacted personally by two people claiming to be Russians that had dirt on Trump, and was more than happy to receive that dirt including sending his staffers to retrive the dirt, and only didn't succeed because they were comedians trolling him. Thus he personally (by his own definition of don jr colluding) colluded with Russians.

It's just like when Schiff got called out for leaking information to the "select" media, but covered his butt by saying he "exposed" it. He weirdly likes to go in front of the media and state something, then days later clam that he was doing something else. I guess that's how he can sleep at night. 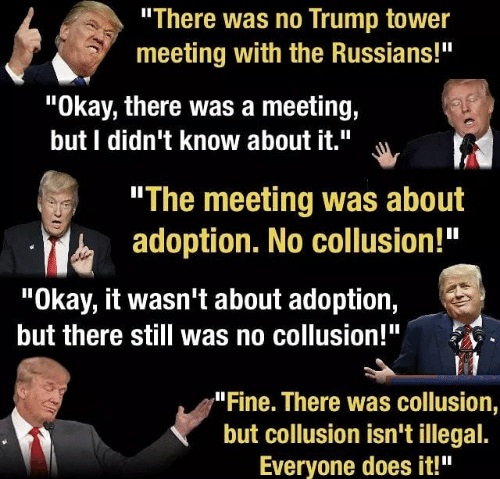 Hey your back with more memes!

Its ok, if I was a fool that bought the Russian collusion lie for two years, I would be afraid to post my own words as well!

posted on Apr, 21 2019 @ 09:01 PM
link
I watch the interview. Chris Wallace was way to nice on him. He was a lot harder on Rudy Giuliani in the interview before that .

But if you watch the Adam Schiff interview. There were at least three “deer in the headlights moments” on Schiff’s face.

I loved the panicked look it’s befitting a weasel .

Here he is after Wallace asked him where the evidence was that he has been claiming to have for two years . His shock was apparent. I guess he was expecting a softball CNN interview ?

It's not illegal to rip the tags off your mattress. Those warnings are for the sellers of mattresses, not your own that you buy for your home.
edit on 21-4-2019 by curme because: (no reason given)

originally posted by: curme
a reply to: ausername

It's not illegal to rip the tags off your mattress. Those warnings are for the sellers of mattresses, not your own that you buy for your home.

It's OK, we don't need some pundits to argue the case.

Trump said that the investigation was the end of his presidency and that he was f***ked.