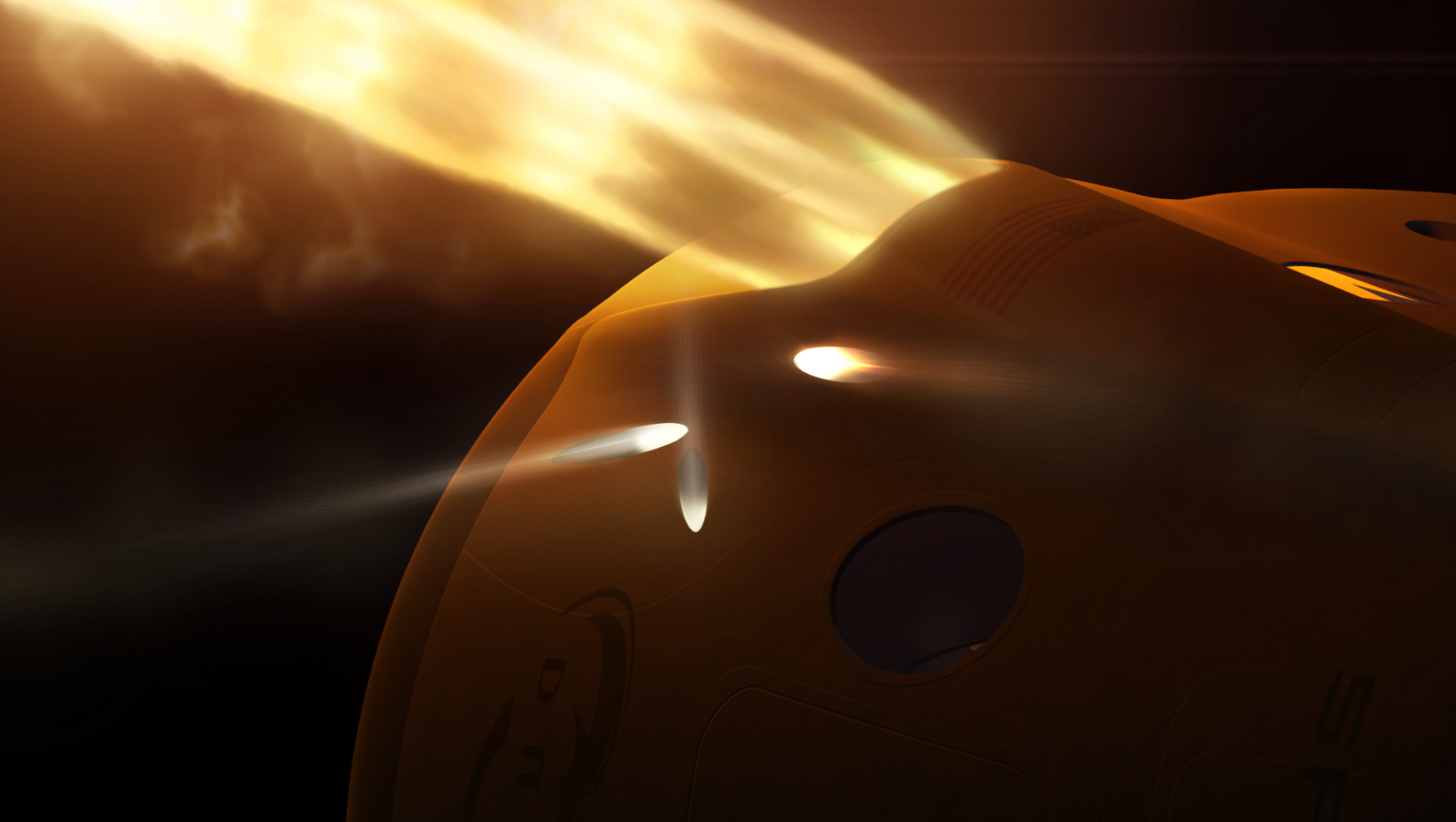 Draco and SuperDraco Thrusters being tested

On Saturday April 20, 2019, SpaceX conducted a ground test fire of the thrusters on the new Crew Dragon capsule. The tests were in preparation for the upcoming abort test. The abort test is to demonstrate the capability to allow astronauts in the capsule to escape from the rocket should there be a problem with the rocket. The Crew Dragon would detach from the main rocket and the very powerful smaller rockets, called SuperDraco Thrusters, would push it up and away from the main rocket to get the capsule away from danger.

The test conducted was a ground test fire with the capsule bolted down (to put it mildly) to a test stand. The Super Draco engines were fired as were the even smaller maneuvering thrusters, called Draco. This allows the engineers to be sure the capsule's engines will work prior to strapped it onto a $50+ million rocket. In the sense that NASA and SpaceX's ground test prevented a loss of a very expensive rocket, the test was wildly successful. 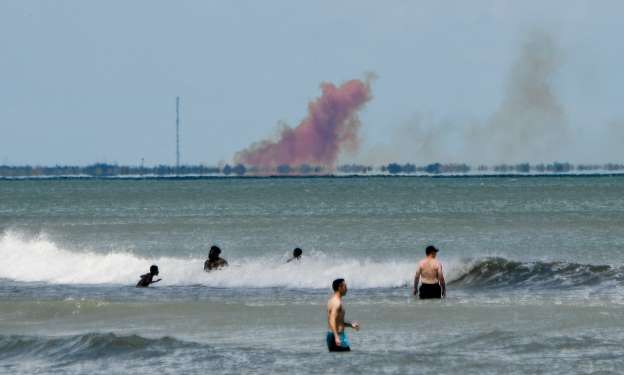 There was a problem. In aerospace speak, they call something, anything, that is out of the ordinary an 'anomaly.' They had an anomaly. In spades. There was an explosion and the cloud from the explosion could be seen for miles. NASA and SpaceX have not been very forthcoming about the nature of the anomaly. Given the cloud, it couldn't be good.

Now, we know just how bad it was. Not officially. But! There was a video of the explosion posted to twitter:

Rocket science is really plumbing dialed up to difficulty ten thousand. Knowing that, it would mean the probable cause is a valve that failed to properly close. SpaceX had a recent problem with a stuck valve, so that would strike me as the likely cause.

I have serious doubts the Crew Dragon will be providing astronaut flights to the space station by year's end given the 'anomaly.' We shall see what NASA and SpaceX say and do. No one wants another Challenger or Columbia though and, as we have learned over and over, space is hard.

posted on Apr, 21 2019 @ 03:38 PM
link
Scott Manley posted this vid about the incident. He seems very knowledgeable about space stuff.

@ 35 seconds in mentions the orange smoke seen is very dangerous dinitrogen tetroxide, whatever that means.

Well.. the test provided results, so its a good test.. and hopefully prevented loss of lives.

And do not tell me they only build one of these.. build two, one for testing and one for upgrading.
They cannot be that stupid they play it all on red, I hope.

They have built multiple. However, SpaceX always ground tests the one they plan on using next. This was the capsule intended for the abort test. The one that recently flew to the ISS will require months of refurbishment.

hydrazine? so that would be a mushroom cloud then.

God I used to hate that crap. Want to ruin a day, put out over the radio an F-16 is coming in with an active EPU. You get about 15 minutes to tow and secure it, then get the hell away from it.


No, it's the oxydizer for the rocket fuel. dinitrogen tetroxide. Hydrazine doesn't create red smoke.

BTW, it was the recovered capsule, not a new one. You can see the reentry burn marks on the hull. 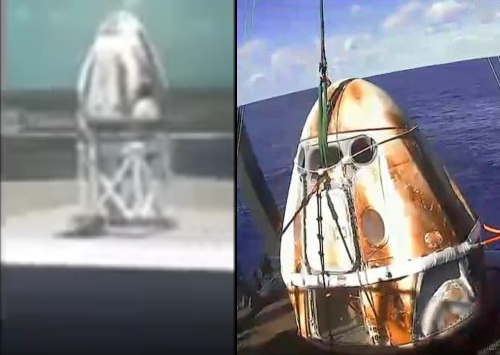 Perhaps the rockets were damaged while the capsule was in the water after landing?
edit on 21-4-2019 by wildespace because: (no reason given)

Was supposed to fly again with live crew in May

This was a test of the SUPER DRACO thrusters

Most LES system used a separate solid fuel rocket mounted on the nose of the capsule . The LES is used to take capsuke off a malfunctioning booster at launch time

The SUPER DRACO uses a mixture of Di Nitrogen Tetra oxide (N2O4( and Mono Methyl Hydrazine (MMH)- this mixture is hypergolic which means ignite on contact . This eliminates need for separate ignition system and allows multiple restarts with a fast reaction time

SPACE X had a rough week

Now this disaster with the Dragon capsule

I still can’t believe the former president ended the Constellation program and put the shuttle into mothballs...

And for all the deluded Space X apologists; man-rate a rocket and land it back on the ground (not splash like we did in the Gemini program 60 years ago)

Where have you gone Werner?

I remember watching an interview where it was said it costs just as much to build a new one as it does to refurbish one and it doesn't look like it was refurbished before the test. At least not on the outside so I just hope they got the data they needed to advance the program.

Was that the launch just the other day? I happened to be browsing youtube and caught the launch live. Hard to describe how impressive it was to watch both side boosters
land and the main booster land on a ship at sea. Stopped after that, didn't know about the booster falling over after landing but I don't think that takes away from SpaceX's capabilities.

Yes from the recent Falcon Heavy launch of ARABSAT

Supposedly SPACE X working to modify it for future launches

originally posted by: wildespace
BTW, it was the recovered capsule, not a new one. You can see the reentry burn marks on the hull.

Perhaps the rockets were damaged while the capsule was in the water after landing?

IF it did blow up, and IF the explosion was caused by the recovered Dragon capsule, then that would strike a blow to SpaceX's plans for used Dragon Capsules to be re-used again for human flight -- unless they can pinpoint the cause of the failure and fix it so it can't happen again on future capsules.

The reusability is promoted a major benefit of the Dragon Capsule.

Interestingly, there was an article earlier this month discussing the need to protect the Capsule's SuperDraco engines (both its maneuvering thrusters and SuperDraco abort engines) from damage caused by launch, reentry, landing, and water recovery. The effects of the thrusters being vulnerable to the elements and protecting them from water is mentioned.

However, sealing the spacecraft from the elements – both before and after launch – is just one of many challenges for safe operations and efficient reusability. Up next, as Musk notes, is protecting Crew Dragon’s 16 Draco maneuvering thrusters and 8 SuperDraco abort thrusters from water damage, as well as sealing off vulnerable avionics for reuse. With respect to avionics, Musk is very likely referring to the electronics and sensing equipment housed under Dragon 2’s retractable nose cone, a new feature for SpaceX.

That is, is there something wrong with the design that might lead to a similar explosion on a totally different and new capsule? I'm guessing SpaceX and NASA would need to know that before the manned test could happen. The answer could conceivably lead to a redesign of the system that failed, which would mean a delay.

Anyway, here is an updated article on the incident and how it might affect SpaceX's schedule:

SpaceX commercial crew vehicle appears to blow up during a test, could delay crewed flight