ONE OF THREE women allegedly involved in a foiled plot in 2016 to blow up a car packed with gas canisters near the Notre Dame cathedral in Paris was today sentenced to eight years in prison by a French court for earlier offenses. www.thejournal.ie...
Ines Madani, 22, was sentenced following a three-day trial during which she was accused of encouraging would-be jihadists to go to Syria and participate in attacks against France between March 2015 and June 2016.
There were 1063 churches desecrated in France in 2018. Its become epidemic while the media & Govt are determined to keep us in the dark. The name of the 2nd oldest church in France set afire last month is Eglise Saint Sulpice.﻿ Last month, at the St. Nicholas Catholic Church in Houilles, in north-central France, a statue of the Virgin Mary was found smashed, and the altar cross had been thrown on the ground, according to La Croix International, a Catholic publication. Last February, at Saint-Alain Cathedral in Lavaur, in south-central France, an altar cloth was burned and crosses and statues of saints were smashed.
israelunwired.com...
Was this a final muslim attempt, to burn down Notre Dame?

Additionally, could be a tourist taking holiday snaps, and the footage may not even be from the same day. 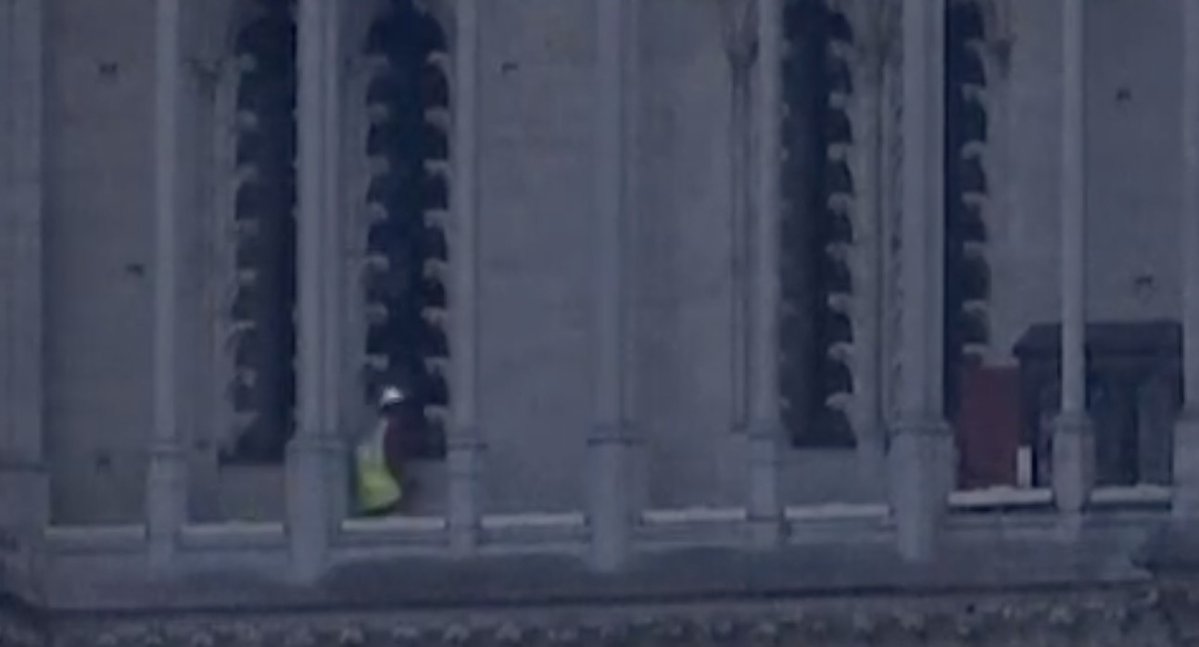 originally posted by: Spacespider
a reply to: Violater1

So then why is he wearing a hard hat like a construction worker? I really don't think so. This is in my opinion a webcam video from a different time period.

posted on Apr, 21 2019 @ 05:04 PM
link
its from the same day
i have the videos saved
it takes the guy an hour to get to where he is in that clip
two people on the roof at that time
after the construction workers leave

Sadly the "agenda" sits not with the public, but is already being carried out, by not telling about the connection.
The powers know a even more heated conflict and pointing fingers will be bad for business.

That's what I said the other day. Macron can't take much more. If he admits it's muslims, the yellow vest and muslims will go insane and kill each other, there'd be civil war. The yellow vests already macron gone, dead, whatever. The rest of France wants him removed. It should be an interesting couple of weeks :-)

posted on Apr, 21 2019 @ 05:33 PM
link
the question we should ask is where is the missing footage from that camera feed.
the footage in the video is a time lapse in one hour clips
the clip before the fire has no smoke or flames
the next clip had the fire already established
so there is missing footage
why aren't we asking about that?

Agenda?
How about just connecting the dots with the other recent arson attacks on churches in France, why does there need to be an agenda?

The French are being a bit bigotted to be fair, they should understand Muslims are offended by Churches and get rid of them all. Problem solved, cant get offended and burn a church thats not there


I see a lot of these events involve actions to trigger an Islam Christian confrontation. Will France be the next Gates of Vienna as I suggested in another thread?

It may already be too late - how do you minimize the threat when all the MSM and Governments are complicit in hiding the perpetrators Jihad intent?

originally posted by: djz3ro
a reply to: Violater1

I can't tell, but why are there 2 flashes of light when the person in the video was on the roof?

posted on Apr, 21 2019 @ 08:57 PM
link
As far as the flashes in the video I think they could be reflections from something like a plastic clipboard or maybe a laminated ID (hung on a lanyard "necklace"). I'd think construction workers might carry both of these, especially a supervisor going over a checklist and the ID - well, that's obvious that an ID might be used for workers on this project.

I'm thinking it might also be the reflection from something like an Ipad or tablet PC. It looks like the sun is behind the camera so it would be pointing towards the person on the roof, giving that type of reflection. Also the speed and height/placement of the flash also makes me thing of a reflection.

As for the cause of the fire being a "short", I 100% think that is BS for many reasons and I don't think a short would light the large timber as easily as what is being reported and it wouldn't burn nearly as easily as what happened. It is very difficult to catch a large beam like that on fire, even with a sustained fire source.

The electrical reason is total coverup IMHO. Even if it was some device like a plastic coffee maker melting from the short and catching fire, it would still take much longer for the fire to spread.


Then we have the delay of the fire company ignoring the first fire alarm at the cathedral, then they get another one and they leave 30+ minutes after the first alarm was received and then they are stuck in traffic while going to the scene. I think they realized that there was time needed for the fire to sufficiently spread and that extra 40-50 mins allowed the size of the origin of the fire to be hidden b/c had they seen the fire 15 minutes after it started and it was already out of hand, they would know it wasn't a short and that it was arson b/c the fire was set in multiple places and/or accelerants were used.

There are so many mistakes and "coincidences" that support the arson case that this is another 9/11 where there is a lot of coverup.

I wouldn't be surprised if extreme leftists (communists) are behind these church attacks and they might be instigating moslems to do some attacks as well - there's also the possibility that both are doing it together, giving cover to one another which allows for plausible deniability as to who is really committing these desecration. It is the goal of both to destroy Christianity so IDK who else would be doing these.
edit on 4 21 2019 by DigginFoTroof because: (no reason given)

Macron has made his bed far before this. He has enough enemies that bureaucracy would most likely expose the truth. As they say with 9/11, a conspiracy with too many players is improbable.

My guess is, while they said no construction workers were on scene, that may not necessarily omit the general contractor super intended, a sub contractor super, or architect (assuming it works similarly there as it does here). The person looks like they're wearing a high vis vest.

My self professed inclination aside, if I was a bad actor, I'd look like I belonged there.... A high vis vest would be a good start.

Take from that what you all want.