posted on Apr, 15 2019 @ 05:52 PM
link
Why don't yall do a simple search and see how many ARE celebrating this on social media with smiley face emoji's and such you'd be surprised......im just letting you all know it's not just all sad faces out there.....

If that was the case then it would be the Pedos in the Vatican burning and not priceless art treasures and irreplaceable stain glass windows being destroyed.

Then again if that did happen all the evidence nevermind the greater part of hidden history and arcane knowledge would probably go up with them.

This is not really about religion per-say, more so a tragic accident and loss for all the people of Paris, and the rest of the world ta boot.
edit on 15-4-2019 by andy06shake because: (no reason given)

Agree fully with you, perhaps I did not write what I meant to get across well enough. I will say it is heartbreaking regardless of anything but its rich and colorful history, artifacts which could never be replaced.

Anything bad that happens to a group or ideology will have some asshats on Twitter saying horrible things.

If radical Islamics did this, my guess is a group would take credit for it, because what would anyone do about it? They haven't shyed away from taking credit in the past, and typically they goad us into reacting the way they want.
edit on 15-4-2019 by CriticalStinker because: (no reason given)

posted on Apr, 15 2019 @ 06:19 PM
link
always amuses me the people who group the entirety of "X" when it is convenient for them, but when it goes against them they yell, "Not all people"

Works fine for me, thats strange.

The pictures doesn't mean anything.

Stop over thinking otherwise you have an agenda you paranoid soccer football batsheet plunker.
edit on 15-4-2019 by mekhanics because: (no reason given)

And there not white so the must be Muslim instigators i suppose? LoL

Two guys noticing they are being filmed would be my bet.

I am against ancient superstitions as much as the next guy, but this is shameful.
edit on 4/15/2019 by staple because: (no reason given)

It strangely sounds like this sound bite, which would render it as fake.

I could have have included the Tweet it was attached to, but that tweet was full of profanity.

originally posted by: BoscoMoney
And all those that were cheering the 911 attacks. All those were faked as well.

originally posted by: TonyS
a reply to: MALBOSIA

I strongly suspect the audio is dubbed in.

But, then again, I'm quite certain we'll never know the truth of how the fire got started. If it was radicals that set the fire.............the French Government would naturally suppress that information..........and if they don't, the US MSM will.

Welcome to the "Post-Truth" world.

macron and every other French globalist are seemingly racking up
mega brownie nationalist points oozing their sympathy and pledges to support
rebuilding the Cathedral. I would listen carefully, and watch his face, those steely, lifeless and scheming sanpaku
eyeballs, as he draws out the restoration plans, which will doubtless include lots of eu support, funding.
Keep watch for other globalist heads of state from other regions of the world creeping into the frame for a good photo op.

I will say it now, mainly because I surmise this as accurate, secondly because I still can
say it and others will read it. This too shall pass, if we let them take it.

The fire could have been carefully planned. It will seem a result of the renovation work,
as these projects do often result in fires, especially amidst the rafter areas. The insurer will have no choice but to keep out of it, work the books, seem to pay out huge amounts, but funds will trickle in from everywhere so long as the friendly local globalist power brokers
emerge to bask in a positive light.

The bottom line is globalism is a dying beast, but still has a deadly venomous pulse, and a catastrophe such as this would be a perfect vehicle for the slimy and loathed macron and his boudoir buddies to dash forward to garner and grab as much perceived French pro-nationalist publicity as possible.

I could be wrong, but this idea is far from being an impossibility. 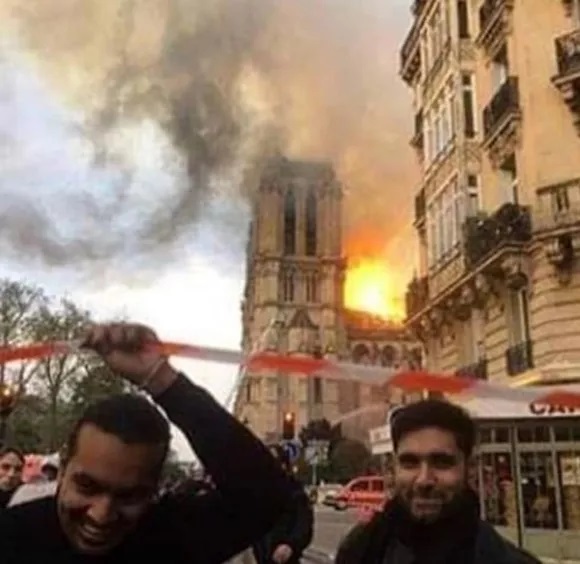