A Blockbuster Trump Report will Be Released With the Mueller Report.

posted on Apr, 16 2019 @ 02:45 PM
link
Each copy of the Mueller report handed out to Democrats will be color coded, crayons, cookies and milk included. Even a free puppy with direction to a safe space. Cant wait for Thursday to come.

NBC News has been talkin with angry Democrats who were on Mueller's team. The best they can do is say that the president gets very emotional with his staff.

MSNBC is making that out to be a negative, but that is a defining trait of really good leaders down through history.

The bottom line is no matter how much the media Or democrats complain or scream, they are powerless to take any type of action.

Since the investigation is OVER, and there was NO COLLUSION, and he was not charged, nor was anyone else with obstruction.....yes, he does got to do just that.


originally posted by: underwerks
Why would someone need a counter report for something that totally exonerates them?

So I guess you don't watch the news and what they do with any information relating to Trump.

If the Mueller report totally exonerates him, what's up for interpretation?

Unless it doesn't really exonerate him..

Fella - you may not realise it yet, but your leftists tactics don't work at all anymore. The entire world is now fully aware that the liberal media and Democrats will take legal acts and politics and skew them into the greatest crime of the century. It's really more of a reflection on your own stupidity if you think that normal people are not going to be prepared for leftist bullsh*t.

So why do they need a counter report for something that completely clears and exonerates Trump?

Maybe you should address the argument and not throw your perceived biases at people.

I already did, and you just repeated the same left wing BS.
We ALL know that the deceitful left will take normal politcial process and try to criminalise it or sensationalise it. Being prepared to call out the BS is sensible.
None of your nonsense is going to work. Trump has been cleared. The left should be more concerned with wiping the egg from their faces after their mass Russian collusion delusion.

You seem to prefer doubling down on stupid.

For the record I never said he wasnt cleared on collusion, one can still question things while accepting truth. And you seem hell bent on no one asking anymore questions.

So you have no response to why the president needs a counter report?
What did the president and his legal team think was going to be dug up by Mueller that they needed a 140 page rebuttal?

Once again - I already told you why a formal response to the report is smart.
Defusing leftist lies and propaganda is necessary, unfortunately, because you guys can'ty help yourselves. You're too invested in your delusions and can't eat the mountains of humble pie getting cold in front of you. You haven't figured out that normal people are on to your BS.

By the way, Trump was also 100% exonorated on obstruction, not only collusion.

My stance is quite clear and grounded in reality - Trump and his campaign team were exonorated of collusion with Russia and Trump was exonorated of obstruction.

The leftist lies and propaganda which we all know is coming will be based on sensationalising the square root of nothing with the help of their media arm.
We're all prepared for the leftist BS. In other words, you lost.

By the way, the special counsel was demanded by Democrats, was carried out by partisan Democrats and the entire preceeding spying and investigation was initiated by Hillary Clinton's campaign with the aid of the Russian FSB and other foreign agents.
edit on 16/4/2019 by UKTruth because: (no reason given) 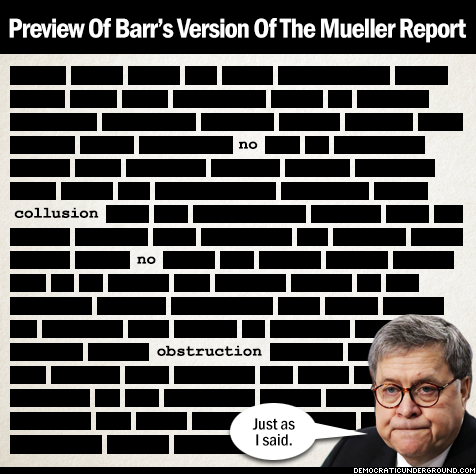 posted on Apr, 16 2019 @ 07:26 PM
link
Watching this unfold reminds me of my football playing days, because I could almost always hear the other team's QB in the huddle calling the plays. We always won those games.

The left is like that except with much worse foresight. They know that we know, the play they are using, but they keep using it anyways hoping it will work. Believing their own falsehoods is the reason why.

It's far beyond pathetic.
edit on 16-4-2019 by NoCorruptionAllowed because: (no reason given)

Protecting all the "innocent" Democrat names 😆🍊🍭

Why are you guys scared of an unredacted Mueller Report?

How is getting the time line and facts straight ruffling feathers?

People are conflating the investigations that came before and the Mueller investigation. I see deliberate acts to make them one and the same which screams of a propaganda move to get ahead of something.


You again are falsely claiming these people are republicans.

Comey, Rosenstein, and Mueller according to you are all on team Trump......

They are not leftists or democrats... They may not be on the Trump bandwagon but they are GOP members.

originally posted by: Pyle
They are not leftists or democrats... They may not be on the Trump bandwagon but they are GOP members.

The GOP rules the South and MidWest.

John Bel Edwards promised when he ran for governor that he would make sure that, under his watch, Louisiana would no longer hold the dubious distinction as the world's most prolific incarcerator of human beings. "We will be number two in the nation in incarceration rates when I'm finished," Edwards, a Democrat, said in Sept. 22, 2015, speech at Southern University, adding that being number two in the country - and thereby the world - would "requite us to take 5,500 inmates out of our prisons. We will get to number two behind Mississippi."

Parts of the US are the most facist because no one cares.

posted on Apr, 16 2019 @ 10:58 PM
link
I hope a unified Barr/Rosenstein/Mueller take to the podium to announce the report's release, and to take all the wind out the sails of Democrat and MSM haters, before leaving the stage.

What's even more pathetic is that a 6th grade football team has more "plays" than the Democrats.

originally posted by: EchoChamber
Trump hiring Barr to control the narrative and redact is the Trump report!!!

carewemust
You didn't know that Mueller/Rosenstein/Barr were working together on making the report legal for public consumption?

You didn't know that Barr has a history of misleading Congress?

originally posted by: xuenchen
The Wrath of Satan is Thursday at Noon 😎

What is the obsession with Satan?

Two threads I had to ask this.


originally posted by: EchoChamber
Trump hiring Barr to control the narrative and redact is the Trump report!!!


They can't talk about that man.
It reveals that they are fools.