posted on Apr, 13 2019 @ 04:18 PM
link
Tucker: People are mad at Assange instead of Obama. This is so true all Assange did was publish info, just like other journalist have. 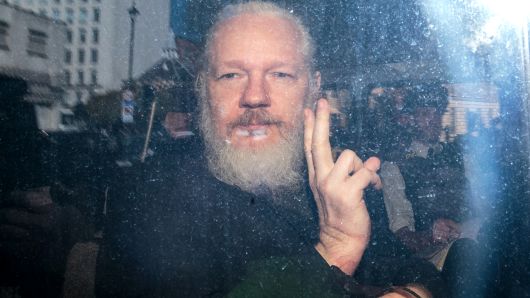 What's the bet many of the 70 "lawmakers" have done things much worse than anything Assange is accused of doing. Not saying he's innocent, just stinks of hypocrisy in politicians when they pretend at some kind of moral authority.


It's extradition to the US which was his great fear and rightly so. It's possible the US will add charges once he is stateside if extradition is allowed. He could face life in prison or even death if they add in the espionage act.

His lawyer is trying to pressure the Australian Government to ask the US to back off.

Now that is funny, The Aussies asking the US to back off.

However the way she explains her comments to defend her client does make some sense, His collaboration with Chelsea Manning to leak those files a few years back is basically what journalists have been doing for decades and if extradited and charged would be a crushing blow to any of the freedoms of information that are left if any at all.


The kind where he might be forced to trade secrets for his freedom or maybe even his life.

I think this is why The US wants him so bad

They must either know or have a strong belief that he or Wikileaks is in possession of information that could really give the US Gov. a kick in the guts, so strong that when they stumble from the blow it could make others rise up and try throwing a few punches themselves while the government tries to catch their breath.

however if anything there will be whole lot of disinfo and misinfo in the coming months and years that will get may of us in the conspiracy circles going mad, many you tubers will see the opportunity to make a buck here and there by creating more videos that many can parrot.

Its just another event tat many should be able to capitalize from.

If they wiki has something and release it, it will be flooded by nonsense mixed with truths from numerous other sources with or without ties to intelligence agencies.

Why would he irk his hosts in this way which ultimatley led them to kick him out, something stinks

Good heavens sir, the Swedish charges have been dropped twice. Once early in the fiasco, then revived by another prosecutor on behalf of the US, then eventually again while he was in the embassy.
edit on 14-4-2019 by Salander because: (no reason given)

Having him gagged for a year unable to defend himself while every outlet has smeared his character is purposeful.

It tends to make an illegal arrest a bit more smooth when lots of people think he is a bad , dirty, Russian asset.

originally posted by: gortex
a reply to: LookingAtMars

Agreed...there's a file dump out there...and when it happens, we'll all know about it.

The so called insurance file is a bluff on his part. The key will never released but if it is somehow, the file will be meaningless or unable to be decrypted. People will then blame the CIA for a cover up or file tampering and the conspiracy will continue.

posted on Apr, 14 2019 @ 11:41 AM
link
Assange looked like a little twat getting dragged out of that Embassy kicking and screaming like a girl . Unshaved and trampish .

Not like nobody knew they were coming , He should have been suited and booted and playing the white man

Pure bread and circus and all distraction

All the faecal smearing narrative reads like classic projectionism to me. TPTB who want Assange silenced are smearing him.

One thing really stands out though. It is clear public opinion still matters to governments. Probably just so they can continue with the freedom and democracy charade. Does it give them the veneer of decency and righteousness, lend a legitimacy to their disgusting life destroying actions?

Who knows but the opinions of the little people and of the intelligentsia still matters.

I have no idea if the charges are still active, upheld or whatever the lawyer-speak for that is. I was merely stating that the crime he has been alleged to have committed first, would be the first trial he would have to appear at. At least, that would seem the most logical way to proceed.

ETA There was an article in British media stating that he could be held in the UK for a year first for skipping bail/failing to appear.
edit on 14/4/19 by LightSpeedDriver because: ETA 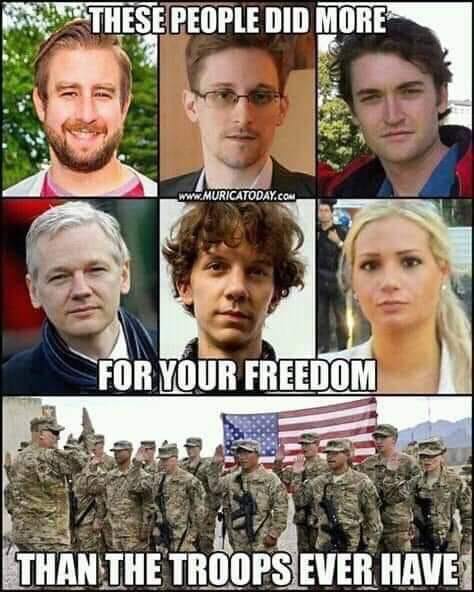 He was found guilty of bail jumping, labelled a narcissist and sent down for a year.

Seriously though, what has Assange actually ever achieved?

You know, apart from winning Trump the 2016 election by acting as a middle man between Russian hackers and Trump, whose sole intention was to produce dirt on Hillary.

Apart from that, all he ever did was release footage that proved collateral damage occurs during war... which wasn't exactly an earth shattering 'blow your mind' kind of revelation anyway!
edit on 14-4-2019 by Subaeruginosa because: (no reason given)

posted on Apr, 14 2019 @ 06:30 PM
link
Julian's charge in the US is just a throw. I know a guy who caught the same charge for hacking into the mayor's email, no joke. He was nervous about it, but copped a plea and got just probation. He's a cool guy but his story makes him seem even cooler. No joke, it's not a big deal.

Assange will be in US protective custody with good accommodations, and plenty of time to work on his other cases in a secure location. Nobody thinks he could just walk the streets, do they?

originally posted by: UpIsNowDown
What a great title as Mr Assange has apparently 'dumped' in the embassy and smeared it on the walls

Why would he irk his hosts in this way which ultimatley led them to kick him out, something stinks

dammit, that was the cypher key for the dig dump!

wait till the rozzers go for pies, sneak in with some luminol and get selfies.

Apparently I have been following the story for a longer period of time than you have.