Ky. Lawmaker Urges AOC To Apologize To Rep. Crenshaw Before A Visit To His State

page: 1
31
log in
join
share:
shawmanfromny
+13 more
posted on Apr, 13 2019 @ 05:19 AM
link
I'm trying hard to avoid articles on Alexandria Ocasio-Cortez, because I can't stand her narcissistic, ignorant attitude. However, I was pleasantly surprised that someone is holding her accountable (yet again), for another one of her mean spirited, ill-thought-out gaffes. People on the left wonder why there's so much negativity, from the right, directed at this freshman congresswoman. The reason is simply that she continues to put her foot in her mouth while grandstanding to the media and no one from the left seems to care.

In the past week, she has gained attention for her cringe-worthy phony accent, which she defended as "authentic," she upset Jews, by using a Holocaust poem in defense of her "pal," Rep. Ilhan Omar and then chastised U.S. Rep. Dan Crenshaw, for not doing anything about home terrorism. Crenshaw is a Navy veteran who served three tours of duty in Afghanistan. Oh, by the way, Crenshaw earned two Bronze Star Medals, the Purple Heart, and the Navy and Marine Corps Commendation Medal with valor.

Ocasio-Cortez had a planned visit to Kentucky, to visit an underground coal mine and coal miners face-to-face:

During a House Committee on Financial Services meeting Tuesday in Washington, GOP Rep. Andy Barr suggested Ocasio-Cortez come to his state and meet some coal miners face-to-face and learn how the Green New Deal would affect them. Ocasio-Cortez responded that she'd "be happy" to oblige, according to multiple accounts of the episode.

Well, now it seems that Rep. Barr is urging AOC to apologize for her comments directed at Rep. Crenshaw. He sent her a letter, stating that her remarks is an example of a "lack of civility that is becoming far too common in the U.S. House of Representatives." 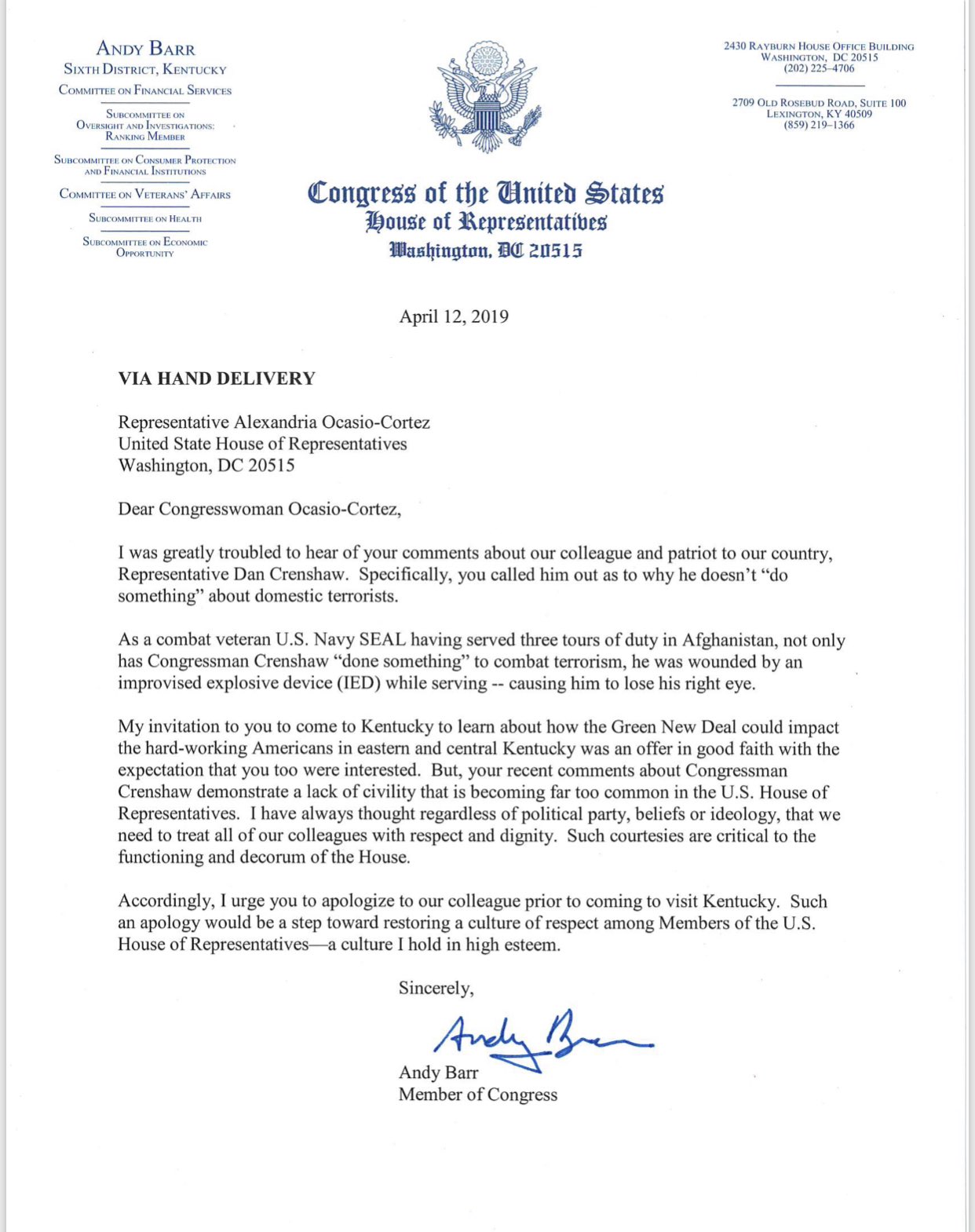 I still can't get over the number of people who support this foolish woman and I'm glad that she's being held accountable for her ignorant remarks made to a decorated combat vet. What are the odds that she doesn't apologize and passes on the Kentucky visit?
edit on 4/13/2019 by shawmanfromny because: (no reason given)

This video was first posted by Mandroid7 in a different thread. AOC is not who people think she is and I think many would be surprised by the info in this 20 minute video.

TLR She was one of 10,000 applicants who applied to a casting call.

Yeah, I saw that video. Not surprising in the least. What is surprising, is how MSM doesn't investigate this and how she's able to acquire close to 4 million Twitter followers. Just proves how many impressionable and ignorant people there are in this country.

To be fair, politics seems to identity and media driven these days. Too many people believe what they see on MSM, be it a paper or a talking-head op-ed TV show. People believe the news, which is sad.

posted on Apr, 13 2019 @ 06:52 AM
link
From what I have read she has done nothing in her home district, and refuses to meet people and doesn't have anyone they can talk to. They miss their old rep they voted out.

originally posted by: musicismagic
She'll fall, just like all popular people that went against the grain.

Omar, Cortez and Thalib are all ran by the same people.....

Their objective is to do exactly what they're doing and make this extremism main stream..... Identify the moderates then primary them out, and fill the empty seats w people just as extreme.....


Go easy on AOC . It is a very tough challenge to remain that ignorant in the US today.

I'd say accept no apology. No second chance. No mercy.

She has no respect for our country, our laws, our Constitution.

Why would she have any respect for our vets?

originally posted by: Tarzan the apeman.
a reply to: shawmanfromny

From what really goes on national TV that is if people really watch it in sober state of mind, people do not care.

Its either people do not care or they are easily manipulated. Or both.


Really? Lack of civility in the house?

Less we forget what the sitting president is...

Aoc is a narcissist , arrogant twit who like to hear her own voice... reminds us of someone who is vehemently defended on ats and the internet troll time and time again...

posted on Apr, 13 2019 @ 02:19 PM
link
AOC has not got any common sense at all. She is one hundred percent chaos. If a person wanted to destroy their government completely they would elect that kind of person into office to accomplish it. There are a half dozen such people that have now been elected into office that can cause people to decide to destroy this system and go back to a fully conservative society. I do not want to see that happening, I enjoy my freedoms which would be crushed if either side gets off balance too far. The far left is not even rational, they are out to destroy this countries sovereignty and peacefullness. They will cause people to fear anything other than a police state by protecting those who break the laws.

posted on Apr, 13 2019 @ 02:23 PM
link
She got elected by 16k in a district of almost 200k. The woman is a sham and in no way representative of the major. Just the voice for a small minority of ingorant bigots.


Agreed. She is not a functioning representative, she is an actor.

posted on Apr, 15 2019 @ 01:52 AM
link
I disagree with 90% of what AOC is blabbering about ,but political groups have always tried to put the sexiest , youthful and sexy or handsome as the lead dog !

posted on Apr, 15 2019 @ 02:09 AM
link
WHY would Alexandria Ocasio-Cortez visit Kentucky? Her home district in New York City is in shambles.