The MPAA, record publishers, cable networks and Twitter all took their hacks at the pro-life film “Unplanned.”


In recent weeks the Motion Picture Association of America slapped an “R” rating on the indie feature. That’s despite “Unplanned” having no adult language, violence, nudity or sexual situations. The film’s abortion scenes are a little challenging, visually. They’re still a far cry from what PG:13 horror films evoke.

Next, a crush of music publishers denied the film’s producers rights to their songs citing vague reasons.

Twitter briefly suspended the film’s official account during its opening weekend run. Hours later, some people tried to follow the page once it came back online … but couldn’t. Some posted video of their attempts to prove their point.

Is Google joining the culture war fight against “Unplanned?” One key piece of evidence suggests that’s the case. Type the word “Unplanned” into the mighty Google.com search engine. Here’s what you find on the very first page, a critical search criteria (Hat Tip: T Becket Adams) 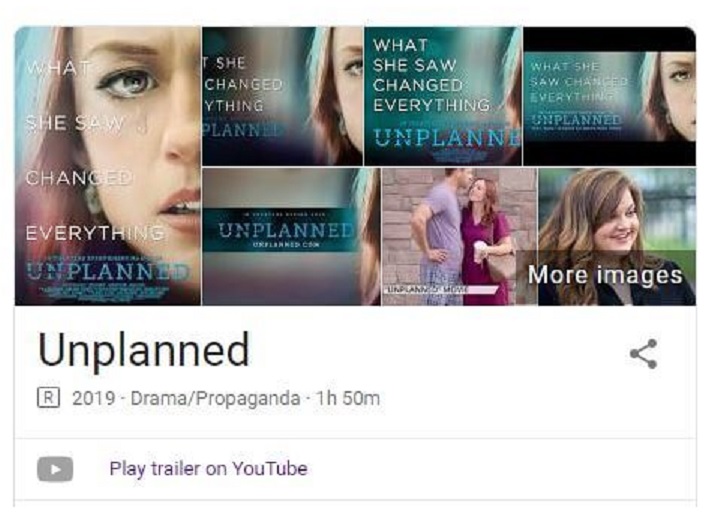 Once again the left tries to suppress free speech, this time by attacking the movie "Unplanned," and now even Twitter has labeled the movie as propaganda.

Despite the fact that "pro-abortion" films, and other left-wing movies are not even rated "R" or labeled as propaganda, such as those by Michael Moore, being full of lies such as his claims about Cuba's healthcare (I am from Cuba and Moore is a lying sack of potatoes), a film which attempts to give the view of the "pro-life" movement is labeled as propaganda simply because the left can't have any dissenting views.

To me, who was born under a far left-wing (communist) dictatorship which also suppresses freedom of speech, what has been happening in the U.S. is almost exactly the same what happens under authoritarian far left-wing regimes.

What the heck is wrong with the left? Seriously. Even if you disagree with the "pro-life" crowd you should at least respect different opinions. IT isn't just Twitter who has unabashedly decided to attack the belief/views of the "pro-life" movement. All the major left-wing/liberal channels, tv channels, and liberal/left-wing social media platforms have been partaking in these attacks at diverging views/opinions.

What's more, there won't be ANY major left-wing/far left-wing voices, nor from the large majority of the left in general, denouncing these sort of attacks on freedom of speech, and that is a troubling sign. Not only the far left, but even the left in general has decided that none of you want any different opinions from your own. This is what happens in dictatorships people.

This is not the only topic/subject in which we see such blatant attacks on freedom of speech by the left and far left. Even when many of these same left-wing/liberal platforms are attacking freedom of speech in the U.S., they are also helping far left-wing regimes, such as China, suppress their own people.

This should be a worrying sign even to the left, but for what I have seen even in these forums, the majority of the left will not raise your voices condemning this sort of callous attacks on freedom of speech.

You know what is strange? Well maybe not, I googled this and the only news about it is from Fox and other smaller sites like Breitbart and thegatewaypundit.

Why are no MSM outlets like CNN, MSDNC, and ABC news reporting this???

Google has joined other tech companies in trying to explain its bias against the pro-life film, Unplanned.

The Daily Signal’s Kelsey Bolar on Thursday announced via tweet that Google had classified the film as “propaganda.” Bolar tweeted a screenshot while asking “Who knew that ‘propaganda’ was a movie genre? Google once again exposing its gross political bias.”

This is not the first obstacle the film has faced, including, according to LifeNews, “ad rejections by most major TV outlets and a temporary suspension on Twitter.”


LifeNews later noted the fact that “Interestingly, a few weeks ago, Planned Parenthood CEO Leana Wen posted a photo of herself on Twitter hobnobbing with Google executives at its headquarters in California.” Also observing how “The abortion giant has blasted the film as propaganda to a number of mainstream and liberal news sites.”
edit on 12-4-2019 by infolurker because: (no reason given)

The left is doing everything they can to attack and suppress any, and all dissenting opinions from theirs.

When the left talks about "large corporation influencing politics, etc" none of them claim this about large left-wing corporations like PP who are actively doing everything to suppress dissenting views.

It's up to parents to instill their values in their children. If they are allowing google to assume that responsibility, there is no one to blame but themselves.

I don't like the leftists position on abortion, but they have the same freedom of speech that I do. To believe otherwise, would make me a hypocrite.

Screenshot of my own search: 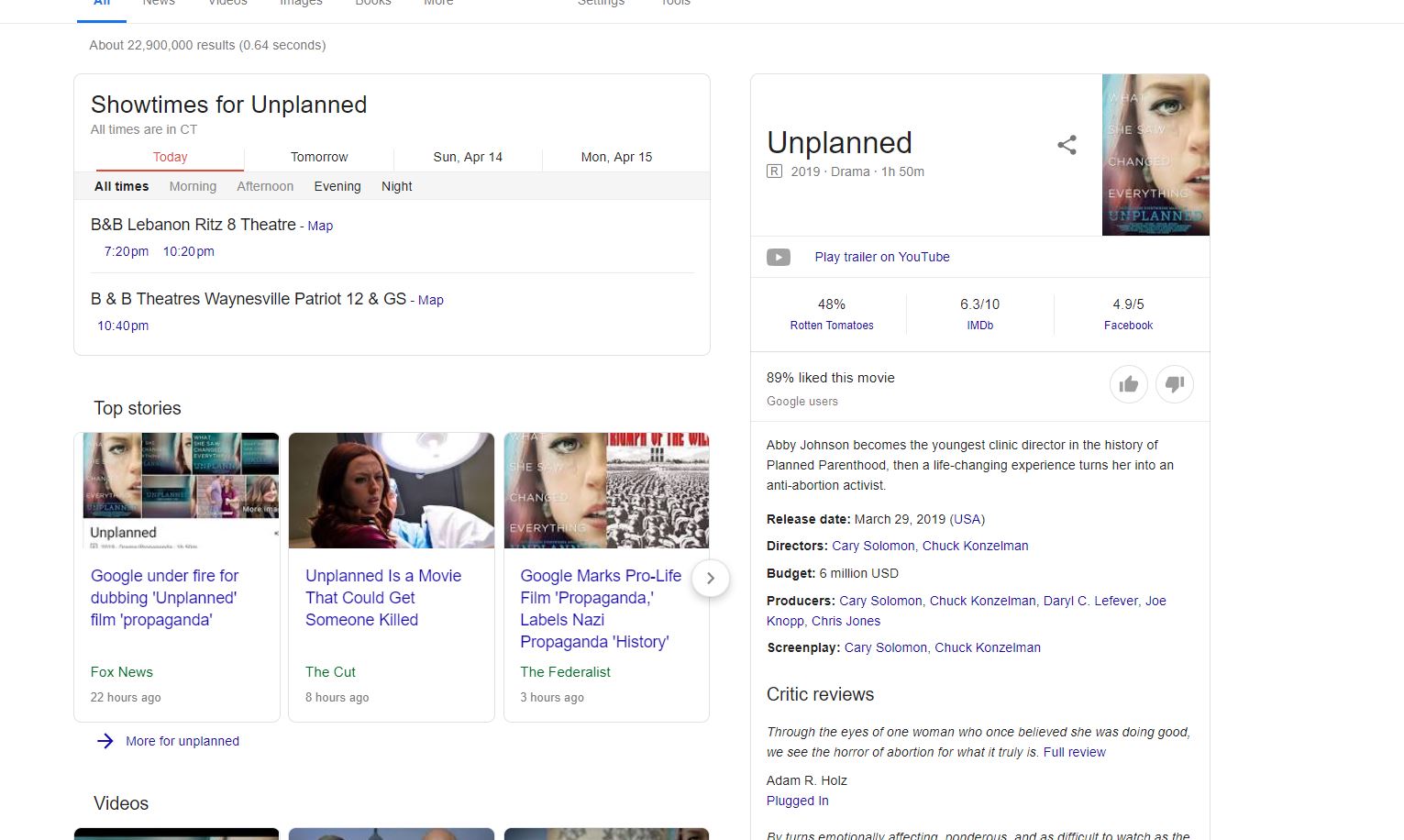 Edit to add: Looks like once this became news, Google moved to fix it.
edit on 12-4-2019 by riiver because: (no reason given)

These companies and the people behind them should be ashamed.

I don't think you're giving them enough credit, at least 90% would be my estimate. It just depends on who the propaganda favors.

originally posted by: spiritualarchitect
And I thought half the films already out there were propaganda.

originally posted by: Ahabstar
Too bad Charles Bronson has passed. He could do a Death Wish 6: True Story Of The Clinton Bodycount

The Clinton's got him.

...
A Google spokesperson told Fox News that after analyzing web content about “Unplanned,” there was a large volume that called the movie propaganda. But after being made aware of facts that have been disputed through the company’s “Knowledge Graph,” the company works to fix issues, the spokesperson said.

After the controversy was sparked, Google has updated its search results, removing the propaganda tag.
...


Whatcha talking about? Left-wingers are today's directors of propaganda and fake news." After all, it is people like you who want to deny the stories of people who experienced the truth of countries like Cuba, or even Venezuela, and like always the responses of those like you are "but, but, tourists can eat everything they want in Cuba and can do almost anything they want..." Talk about propaganda...

Don't think I've ever made any sort of commentary on Cuba or Venezuela, so it's odd you think I have.

What does that have to do with a film about abortion though? Not a lot, so on that theme, how's that totally not propaganda bible going for you?

Surely you can't deny that the holy book is for all intents and purposes PROPAGANDA.

1 capitalized : a congregation of the Roman curia having jurisdiction over missionary territories and related institutions

2 : the spreading of ideas, information, or rumor for the purpose of helping or injuring an institution, a cause, or a person

3 : ideas, facts, or allegations spread deliberately to further one's cause or to damage an opposing cause also : a public action having such an effect

That's from Webster's, honestly definition 2 and 3 could apply to really any form of communication from any political, religious, or other ideological spectrum. The word only has negative connotations because we give it such in current dialogue. The film is trying to further an anti-abortion stance, one could say helping the cause of anti-abortion, spread deliberately to further this particular cause. Fits the definition to me.

Basically, everything could be labeled propaganda.

It’s funny, Abby Smith’s who’s memoirs this movie is based on said..

“In my opinion, one of the most impactful films of our time is ‘The Passion of the Christ.’ It was rated R. So I feel like ‘Unplanned’ is in good company. An R rating from the MPAA isn’t going to slow this movie down. I believe people are ready for the truth.”

Lucky we have the likes of the op over reacting and getting enraged though...

It has everything to do with "propaganda." Left-wingers believe propaganda, and fake news every day of the week.