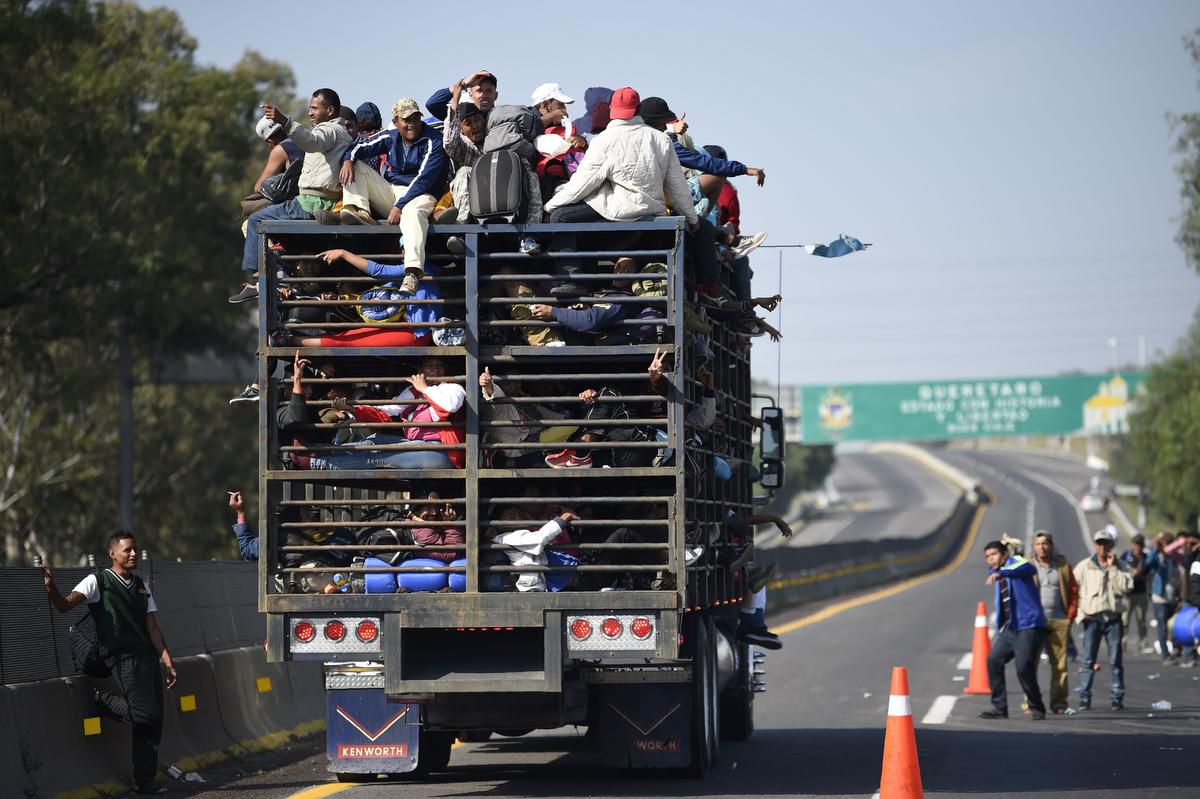 But of course it is....
The government will use air conditioned buses that are not crowded to transport the 'refugees' to sanctuary cities..... lest they be accused of being 'inhumane'.

Where are you going to release them, the wilds? Release 10,000s in some small border town? How about 100 miles in the desert from nowhere. Sanctuary cites actually make sense if we are forced to release them into the general population.

Just another hypocrisy moment for the left... "You must release them!!" "Release them in my city? Ah hell no!!"

"Give me your tired, your poor, Your huddled masses yearning to breathe free, The wretched refuse of your teeming shore, Send these, the homeless, tempest-tost to me, I lift my lamp beside the golden door!"

Its hard to understand because we get so little useful information on the situation. I live in Texas and not far from the border.

My understanding is that once across the river and on US soil, all the "migrants" need do is make a claim for asylum. They are picked up by Customs and Border Protection and taken to processing centers where they are tagged and bagged like wild life and allowed to submit the papers they fill out to apply for asylum. Once that's done, they are bussed, for example, to the El Paso Greyhound Bus station and summarily dumped. In Laredo, after leaving CBP they proceed to a Catholic Charities processing center where they make arrangements to travel to their final destinations, which are typically cities or locales where their relatives live.

What we don't know is how many MS 13 members are coming across.

posted on Apr, 15 2019 @ 01:05 PM
link
Why is this a big issue? Because it makes sense and makes the Dems look bad. I see all the talking heads back on the news and now that Russian Collusion is gone what is making a comeback?

The Dreamers and DACA. All of them saying that Trump should work on immigration policy without mentioning he did offer DACA a chance as well as full amnesty and Chuck and Nancy did not show up. Twice.

The media may cater to the simple minded but those who voted HIllary or were on the fence in 2016 will not be in 2020 and will remember these items.

If you want to be a sanctuary city you should be the FIRST to accept those who are defending. A great policy if you ask me. he is saying he will allow them in and they are still complaining...they just do not get it....

That video reminds me of something my Dad was fond of saying: "don't let your ocean-liner mouth overload your tugboat rear."


My understanding is that once across the river and on US soil, all the "migrants" need do is make a claim for asylum.

Once they are in they say the magic words the boarder lawyers tell them to say. They then go into a detention center for processing and this is why kids are removed at times when no one knows who is who. At some point they have months to wait for their hearing so they are released into the general population and as you say it is typically charities that support them. The US can not send them back home or even to Mexico to wait out their time, so once again what are we suppose to do. It is not like the left are coming up with a plan...Just like their homeless friendly cities that they never actually put any infrastructure into place to support them like port-a-potties. Now homeless are seen as the dredge of society for many of these cites as businesses shut down and close their doors to them with combo locks etc...Funny how they change their toon when it hits close to home.
edit on 15-4-2019 by Xtrozero because: (no reason given)

What's wrong with putting illegals where they are actually wanted?


Not only that, sanctuary cities are more than likely the destination of the vast majority - especially the criminals.

So, you are helping them get where they actually want to go, and minimizing the number of crimes the criminals will engage in on their way.

I personally believe that people who choose to live in sanctuary cities deserve what they get.
edit on 15-4-2019 by tanstaafl because: (no reason given)

Funny that, how they hide the numbers.

Rich irony in that considering the Sanctuary Cities are all 90% Democrat jurisdictions. Target rich environment for the likes of MS-13.


Funny that, how they hide the numbers.

Add the huge increase of families and unaccompanied children and we have a crisis that no one on the left wants to talk about.

originally posted by: incoserv
It's in Toronto, but the principle is the same ...

Here's some irony for ya's. Don't want to derail so I'll go quick.

I've rented a converted garage for about 5 yrs, it's nice, good newer neighborhood, full bathroom, no kitch but I suffice. I received notice the they would be moving in their sisters, husbands, cousin from South America, who is,.... you guessed it, an illegal and I'll be homeless at the end of month. Normally not a big deal but..........

I lost my not so great job (no savings) in Nov due to a heart attack around Thanksgiving and got pneumonia in Dec., 7 hospital stays and counting. My heart was damaged worse than originally thought and I've been in a nosedive since the bout with pneumonia in Dec, can't work and have no assistance. I have a 7x14 cargo trailer that I'll be calling home come April.

I'm not whining but the irony of being displaced by an illegal coupled with the bad timing of the health issues has made for a interesting year so far.

The left sees no crisis. They see success! Their open borders via asylum laws will not only fundamentally change the US, it will ultimately work to establish One Party Government, just like California.

posted on Apr, 16 2019 @ 08:04 AM
link
What does "as immigrant populations grew almost across the board" mean? As far as I knew, nobody knows how many illegal immigrants have entered our country nor where they live. It's not a statistic that is routinely gathered during the processing of criminals. And because of that, the Left can disingenuously say that immigrants commit fewer crimes.

Do you know who the two most law-abiding demographics in the U.S. are? Legal immigrants and legal gun-owners.
edit on 16-4-2019 by ltdan08 because: Lost the post I was trying to quote

posted on May, 20 2019 @ 08:43 PM
link
Why doesn't Trump make the proclamation that he will be seriously decreasing ICE operations in key sanctuary cities and redeveloping those against and services to the boarder? Make the statement that illegal immigrants will be safe from prosecution in NY, LA, and ect.

He won't have to actively release them in those cities; they will go there on their own.

Guess you didn't read the article either?